We’re No. 1 again for the amount of time we give away in the name of a good cause.

For five years running, volunteers in the Twin Cities metro have placed at the head of the volunteerism pack — tutoring kids, collecting and distributing food to the hungry, assisting military veterans and their families, among myriad other volunteer opportunities — tallying almost 101 million hours annually for the last three years.

More than one-third of us — 37.1 percent — last year volunteered in schools, museums, at sporting events and in hospitals and with faith-based groups.

In dollars, that’s a donation of almost $2.2 billion total over the last three years, says Heather Peeler, chief strategy officer for the Corporation for National and Community Service, the federal government agency that released the numbers Monday night. “The report shows volunteerism has a powerful economic as well as social benefit in our communities,” Peeler says.

The “Volunteering in America” data, compiled with U.S. Census and U.S. Bureau of Labor Statistics data, is cause for celebration and a sign of good-hearted people, says Mary Quirk, executive director of the Minnesota Association for Volunteer Administration.

Ranked third among states
“We have a good structure for volunteerism here,” says Quirk, adding that a lot of nonprofit organizations that realize the importance of volunteers plus are good at recruiting, training and retaining them. Minnesota as a whole ranked third for volunteerism among the states. 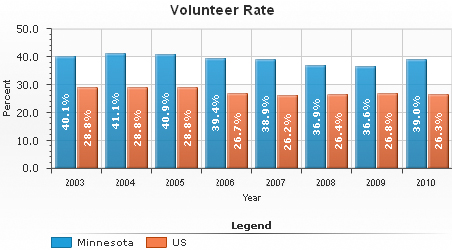 Further, a survey last year by her group, MAVA, showed more than half of its members had increased reliance on volunteers because of the recession, a development documented in MinnPost. That survey also showed Minnesotans turning to volunteerism after losing jobs to fill time as well as to gain experience to add to resumes.

“In addition, we just have a passionate community here of organizations and individuals that want to do good,” Quirk says. 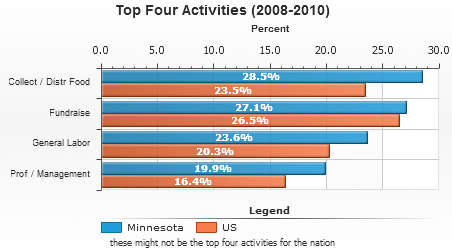 Payback for volunteers
For Mike Ginal and five other colleagues at Horizon Milling in Rush City, volunteering is its own reward. “The payback is in the smiles, the interaction with the kids and the feeling we’re helping somebody progress. We celebrate with them,” the facility manager says.

These Horizon Milling employees go into the local elementary school to tutor second- and third-grade students through the Minnesota Reading Corps program, and have for more than five years.

Says Peeler, “We know people want to give their time to help the country tackle the biggest challenges.” 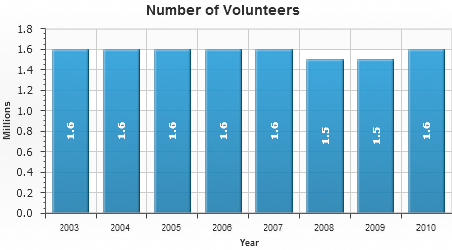 She says people volunteer most often through faith-based organizations, then in schools, through social-service organizations and through workplace-sponsored programs. Nationally, volunteers served almost 8.1 billion hours in their communities to the tune of $173 billion, the CNCS says, adding that the dollar value is calculated by Independent Sector.

The Twin Cities edged out No. 2 Portland and No. 3 Salt Lake City, but the state as a whole fell behind Utah and Iowa. 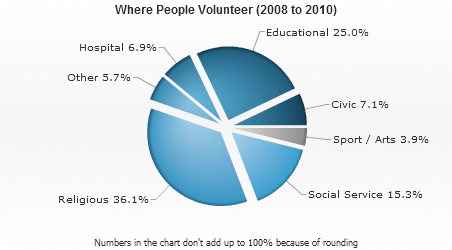