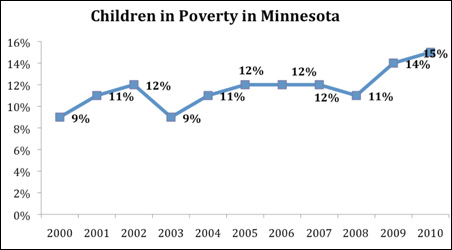 Courtesy of Children’s Defense Fund-Minnesota
An estimated 14.6 percent of Minnesota’s children were living in poverty in 2010.

Taking a U.S. Census Bureau magnifying glass to poverty numbers reveals significantly more poor kids in Minnesota than we were thinking we had only last week — 15.2 percent. And the overall poverty rate rose, too.

Now, with American Community Survey (ACS) findings released today, it’s estimated there are 192,437 kids at or below the poverty line, up 9,437 from last week’s report from the Current Population Report Survey (CPS) that estimated 14.6 percent of Minnesota’s children were living in poverty. Among the very young — children under age 5 who are in the most formative years — the poverty rate is a bracing 17.2 percent.

Poverty has struck youths in the suburbs as well, with Brooklyn Park’s child poverty rate estimated at more than 31 percent, almost 1 in three youngsters.

The ACS numbers are based on a larger sampling of U.S. households — 3 million rather than 100,000 — and so are more accurate at the local level than last week’s CPS numbers. (The increases are greater than the bureau’s stated margin of error.)

Contrast these figures to the year 2000, when 9 percent of kids were at or below the poverty level.

“Really disheartening,” is what Sybil Axner, director of the Children’s Defense Fund-Minnesota calls it.

“Kids are the most vulnerable to poverty. Their brain development and their sense of well being, those kinds of things are formed early in life,” Axner says, and negatively affected by poverty, poor nutrition and poor quality housing.

When children have warm homes, are well fed and when they can go to the doctor and go to school healthy, the state as a whole benefits, Axner says.

In addition, poverty causes high levels of stress that affect how a child’s brain develops, and may influence his or her health through life, said Marcie Jefferys, policy and development director at the Children’s Defense Fund.

The numbers confirm that poverty is increasing and household incomes are decreasing, says Christina Wessel, deputy director of the Minnesota Budget Project.

A deeper look reveals more bad news. Comparing overall poverty levels in 2007 before the recession and 2010 poverty levels shows racial disparities as well, with a “really huge” increase among American Indians, Wessel says. (Populations of color are also growing in regions across the state, according to state demographers.)

The poverty threshold, by the way, is an annual income of $22,113 for a family of four.

Black and African-American rates at the current 37.2 percent and Latinos at 24.4 percent and other racial groups increased but not significantly, Wessel says.

What do the numbers tell us?

That the need for public programs to help families living in crisis situations is greater than ever, says Wessel.

The stress and hardships caused by money shortages are mitigated by childcare assistance programs, better wages, public food-support programs, unemployment benefits, health insurance and energy assistance programs, Axner points out. And there’s the rub, she says, with cuts of such programs at both state and federal levels.