By most any reckoning the needs of the poor are growing in Minnesota and the nation, while resources to provide for them are increasingly scarce.

Take a look at Tuesday’s U.S. Census Bureau report for 2009-2010, a count of those citizens who can officially be called poor. Nationwide there are 46.2 million of them, the highest number in the more than five decades the bureau has tallied such numbers. In Minnesota there are now about 544,000 people in poverty, comprising 10.8 percent of the state’s population.

And a fresh report this week by the Minnesota Council on Foundations shows that foundation- and corporate-giving for programs to directly help the poor in Minnesota are down in recent years.

About one million  —  one in four Minnesotans – are considered “near poor” with incomes less than 200 percent of the poverty threshold. Household incomes here dropped 3 percent, a 15-year low, according to the Bureau report.

According to The New York Times: “It was the first time since the Great Depression that median household income, adjusted for inflation, had not risen over such a long period, said Lawrence Katz, an economics professor at Harvard.”

The report reflects, of course, conditions caused by the worst economic recession since the 1930s and a high level of joblessness and a still unsettled economy, though the Census Bureau also released historical statistics showing high poverty rates can linger for some time after an economic recession is officially over.

National ranking
Nationally, the poverty rate is 15.1 percent, while Minnesota ranks 13th lowest in the nation in numbers of those living below the poverty line ($11,344 for an individual or $22,113 household income for a family of four), but the state’s numbers have increased significantly from 2007-2008. The poverty rate then was 9.6 percent.

The effects play out in the state in concrete ways. Human Services Commissioner Lucinda Jesson told MinnPost last month that 104,000 more Minnesotans have signed on for food support this year compared to last.

Many are calling for additional resources.

Yet state and federal lawmakers argue the necessity of spending cuts and balanced budgets. Charitable giving is not the problem solver, either. 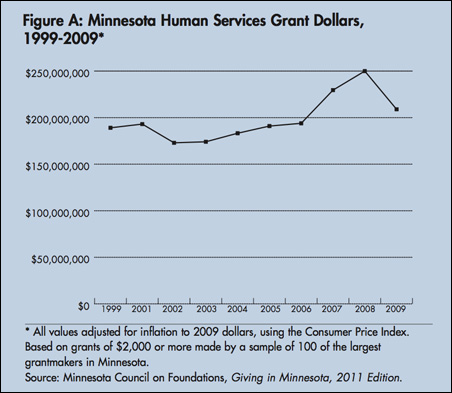 Foundations report
The Minnesota Council on Foundations reports this week that foundations and corporate-giving programs in Minnesota awarded $208.9 million in grants in 2009 to nonprofit organizations providing such things as housing, shelter and food.

The council’s research sample encompassed 100 of the state’s largest grant makers and their grants to human services organizations.

Yes, the numbers are old, but they’re the latest data available, culled from IRS tax returns, says Bill King, president of the Minnesota Council on Foundations, and what the report illustrates, he says, is a “longer set of trend lines,” how giving plays out in response to a poor economy and other variables.

“Although significant, this drop is not as dire as it sounds,” explains King. “Several large one-time capital grants were reported in 2008 and they account for nearly half of the decrease.

“Some grant makers stepped up to meet growing demands. This was despite experiencing a precipitous decrease in foundation assets in 2008,” King says.

But those grant makers channeled grants to employment-related programs (9 percent of overall human-services funding), which increased 97 percent from 2008 levels. The Carl and Eloise Pohlad Family Foundation “drove the increase,” according to a MCF news release, giving $8.3 million to the employment sub-category. That foundation increased its overall human services giving by 425 percent over 2008 to a total of $14.1 million. 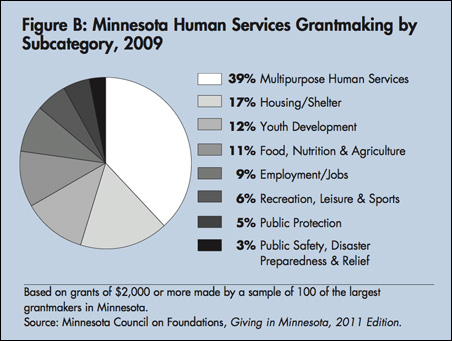 Others increasing their giving included the Otto Bremer Foundation, which along with Bremer Bank, created the Bremer Emergency Fund and granted about $4.2 million. The McKnight Foundation, the state’s largest human services grant maker in 2009, contributed $25.2 million to the category.

Looking ahead
Does King think the downward trend has continued or worsened in 2010 and 2011?

“I have a tendency to believe, and this is a little speculative,” King says, “that because the economy started to return in 2009-2010, we’ll see dollars [spent] in 2010 level off or increase a little bit.”

Now that the stock market is exhibiting a “roller-coaster effect,” however, that may change things, though foundations tend to average out their grant making over several years, rather than month to month or year to year, depending on their assets, he says.

Brian Rusche, executive director of the Joint Religious Legislative Coalition, was distressed to hear of the giving decrease, though not surprised. “I would imagine we still were seeing the effects of the market collapse,” he said.

Hearing of a channeling of resources to employments services, he says he can appreciate that effort, “but I worry about whether or not people are getting trained for jobs for which there is hiring going on or that will soon be going on.”

Generally, he acknowledged, if unemployment is high, it’s a good idea to put people into training programs and “bank on the recovery.”

But in the short term, he fears “more hardship, more unmet needs. The economy has been brutal and our response to it has fallen short. Our capacity to respond in philanthropy is a bit smaller and in policy making it’s paralyzed,” Rusche says.

What, then, is the answer? “Robust growth and sensible policies that lift up struggling families,” Rusche says.