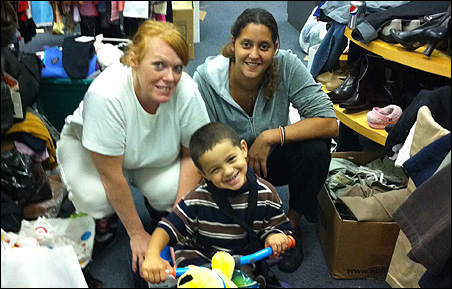 MinnPost photo by Cynthia Boyd
Setting up Families Helping Each Other in a new space are volunteers Jennifer Doherty, left, who is the warehouse manager, and Sarah Clay and son Manny, 3.

Behind glass doors in a shabby strip mall in Frogtown, one of the poorest neighborhoods of St. Paul, shines a beacon of hope at a time when poverty rates are climbing and neighborliness sometimes seems in short supply.

Here stands Families Helping Each Other, a fledgling and little-known charitable organization started by a woman who has known both the American dream and poverty. Behind a sign decorated with two red hearts is the free store she started, a depot for clothes and shoes, small household goods and toys and more.

Right now the mountain of goods is so high it’s a challenge to enter the front door.
That’s because on top of just having moved to their new storefront location at 757 N. Milton St., they’ve just received two donated truckloads of stuff.

“It doesn’t usually look like this,” says a cheerful Julia Sonnen, 38, founder and president of Families Helping Each Other. She figures she’s helped about 350 families, mostly single moms, that is about 1,000 people, since she started the 501C(3) nonprofit about a year and a half ago in her landlord’s garage in Highland Park. She used Facebook to post her concept of a free store and the need for donations.

“Even thrift store prices can be out of reach for families that must make every penny count,” Sonnen says.

Grand opening
The operation has moved twice since then with its grand opening at the 5,000 square-foot new location to be from noon to 5 p.m. Oct. 8, with music, food, kids’ activities and a ribbon-cutting. Now non-profits around town refer the needy her way.

Sonnen founded Families because she knew firsthand the need to tight stretch a government check. A divorced mother of four with a college degree, she says she still can’t find a job to support them and afford daycare.

“I’m still on welfare,” she says. Her non-profit doesn’t earn enough for her to draw a salary. 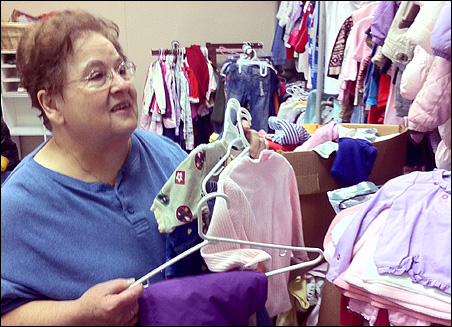 MinnPost photo by Cynthia Boyd
Hanging up kids’ clothes in preparation for the Oct. 8 grand opening is volunteer Eileen Gogolakis.

“I learned about Julia after I had a house fire,” says her warehouse manager Jennifer Doherty, mother of 11, who used to run a company that repossessed cars from buyers way behind in their payments, but quit, she says, after being run over three times, stabbed and shot at.

“I jumped on Julia’s cause,” Doherty of St. Paul says.

Patron Sarah Clay comes because three jobs as a personal care attendant don’t pay the bills and she needs to clothe her four kids. She also helps out with the operation.

Yet at Joseph’s Coat on St. Paul’s West Seventh Street, a free store that’s been around for 22 years, executive director Cheryl Bade knows Sonnen and sees no duplication of efforts in Sonnen’s operation.

“There’s a need great enough. We are seeing so many people now that it’s overwhelming,” she says, with a daily average of 500 or more adults and 80 to 200 children to serve. Some days 700 or 800 “shop” that store, people who never, ever thought they’d be in such need, people whose homes were foreclosed, who lost their jobs or were sunk by unexpected medical costs, she says. Clients can come as often as weekly.

Bade says goods donations are plentiful, but the money donations needed to pay rent, utilities and the salaries of two employees are in short supply.

Sonnen’s personal background is complicated but includes broken dreams and two marriages. Factor in a restaurant and catering business owned and lost, as well as a home, all stuff of a solid middle class life.

Add in a soldier husband suffering from post traumatic stress disorder after serving in Iraq and related illness and an ended second marriage.

Pregnant, she brought her three children home to St. Paul to family and her middle-class roots. Growing up comfortable in St. Paul’s Highland Park neighborhood, she’d attended Catholic schools right up through the University of Thomas. “I’d never been poor in my life,” she says. She moved in with her parents for awhile. 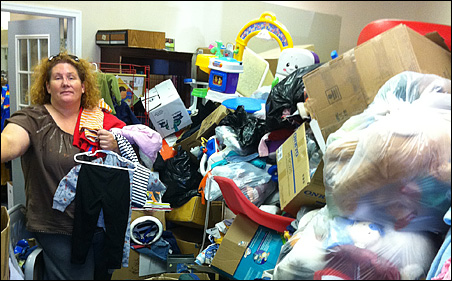 MinnPost photo by Cynthia Boyd
Julia Sonnen, founder of Families Helping Each Other, sorting through a truckload of donations.

Then she turned to public assistance. “I had always been pretty judgmental about people on welfare,” she admits now, saying she used to think those receiving assistance were “lazy” or “didn’t want to work.”

“I was shocked how it barely covers necessities. I was shocked, absolutely shocked at how depressing poverty is, how difficult it is, how hopeless, how hard it is to get out of the pit of poverty,” Sonnen says.

Still, she was able to move into a small two-bedroom apartment, used food support for groceries and received Medical Assistance.

Supplies low
“I was so depressed and overwhelmed,” she says, with no extra money for enough clothes and shoes for growing children or personal care products such as shampoo. She kept having to borrow money from family.

She tried free stores for clothes for her kids but the lines were long and supplies low at the end of the wait.

So she started Families Helping Each Other, not only for the free store but the seminars she hopes to start on budgeting, finance, health, nutrition, life skills and career development. Already there is a single moms’ support group. Already non-profit helping agencies around town refer the needy her way.

“Working together we can create the resources, opportunities and networks we need to help move parents and children beyond surviving to thriving-because healthy families are the foundation of safe and productive communities,” Sonnen says.

Busy setting up the operation and opening the doors to the constant stream of needy, Sonnen has yet to find grant money to pay costs, such as utilities and rents. She gets help from family. Her current landlord discounted her rent. Volunteers work concessions at sporting events to earn money for the nonprofit. She’s looking for a volunteer grant writer.

In the meantime she’s attracted volunteers like Eileen Gogolakis, who is organizing fellow church members at Bethel Baptist Church in Sunfish Lake to help support the free store.

And Sonnen says she’s never been happier than she is right now helping others.