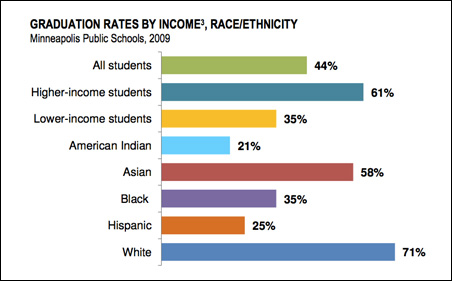 Courtesy of The Minneapolis Foundation
American Indian students of all groups are least likely to graduate from high school, compared with other racial and ethnic groups.

A new report demonstrates dramatic differences in the lives of Minneapolis residents of color, compared with their white counterparts, as well as to one another, even as the city is becoming more racially and ethnically diverse.

“Across most indicators a wide gap in opportunity or outcomes exists by race and income,” according to the report “One Minneapolis: A vision for our city’s success” commissioned by The Minneapolis Foundation and released today.

The report shows “pervasive” racial disparities in education, housing, jobs and other measures in the community, according to Minneapolis Foundation President Sandra Vargas, who called it “shocking.”

“We have known about this but not the degree to which disparities exist. There’s no running from it,” Vargas said.

The disparities have “been hidden in plain sight,” according to researcher Andi Egbert, who says the report — a compilation of data from the 2010 U.S. Census, the 2009 American Community Survey as well as from state, county, city and school sources — puts Minneapolis “under a microscope.” Egbert, from Wilder Research, helped prepare the report with colleague Laura Martell Kelly.

“There should be a call of outrage and, more importantly, a call to action,” says Vargas, whose nonprofit agency will be doing just that in coming days, alerting those she describes as the “generous, good people” of a “progressive” Minneapolis to the findings.

The foundation, which, in full disclosure, is a financial sponsor of Community Sketchbook, plans now and in the years ahead to lead community conversations to work toward equitable solutions to the inequities as well as to highlight on its website programs that are successfully working to close racial and ethnic gaps. 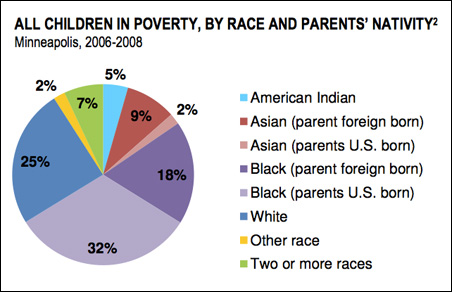 Courtesy of The Minneapolis Foundation
More than half of the city’s American Indian, Asian and black children live in poverty.

The report stresses the importance of “everyone fully participating in our workforce and benefiting from our shared quality of life” in order for Minneapolis to continue as “an economic engine for the state.” 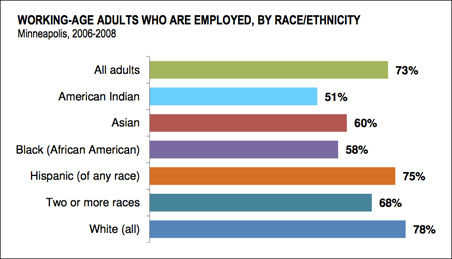 Courtesy of The Minneapolis Foundation
Whites of working age are most likely to be working (78 percent) followed by Latinos (75 percent).

There are some bright points: The percentage of residents who feel “unaccepted because of their race, ethnicity or culture” has declined from 19 percent in 2002 to 9 percent in 2010, though at 20 percent, blacks and African-Americans make up the largest group of those feeling unaccepted.