He was born in mountainous Cambodia and dreamed of owning a farm. She was born to the far-reaching plains of the Midwest and flourished in an urban setting of coffee shops and poetry readings.

Now, immigrant Proeun and Amy Doeun are married, have four children, a herd of goats and 85 chickens as well as their own 40-acre farm in Rush City. That’s thanks in large part to the Minnesota Food Association, a farm entrepreneurship program she calls “our alma mater.’’

That program is but one of many to be highlighted at an upcoming national conference with a title as long and as self-explanatory as many a non-fiction book.

“Grassroots & Groundwork: Working Together to Reduce Poverty and Build Prosperity” will showcase both tested and emerging models for helping low-income as well as immigrant and refugee populations to get out and stay out of poverty, planners say. More than 400 people are expected to attend the event  sponsored by the Northwest Area Foundation June 6- 8 at Mystic Lake Casino Hotel in Prior Lake.

“We believe all communities can prosper,’’ says Kevin Walker, president and CEO of the foundation.

Presenters from around the country, including Oregon, Seattle, Philadelphia and the Twin Cities, will talk about programs working to stamp out hunger and poverty. Another local effort is Minnesota FastTRAC, a program to prepare “skills-challenged” adults for living wage jobs.

Minnesota Food Association’s  Executive Director Glen Hill describes his organization’s efforts as a “small business incubator.’’ Since 2007 they have taught 100 immigrant and minority persons how to operate financially viable organic farms and will expand on that at their Spring Open House  May 12.

Currently 29 people are farming land at Wilder Forest on acreage north of Stillwater, learning as the growing season progresses. Twenty-eight of the farmers are from minority and immigrant groups, including Hmong persons. Others are from Kenya, Somalia, Iran, Guatemala and other countries. One farmer is a Caucasian woman. 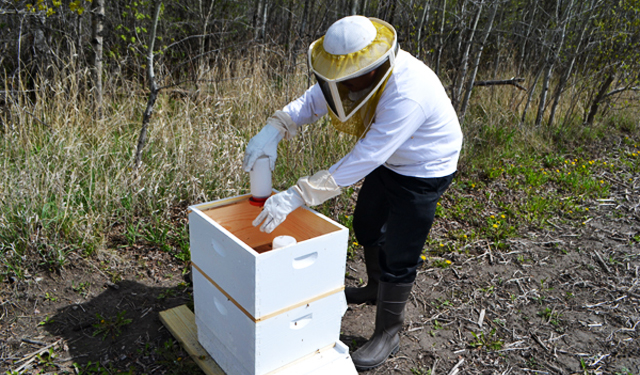 Photo by Amy DoeunProeun Doeun tending to the farm’s bees.

The need for such agricultural training appeared as Minnesota experienced a “huge and steady influx of immigrants from other countries, many of them from agrarian societies and they would like to know how can I farm in Minnesota,’’ Hill explains. The program teaches about the growing season here, crops, prices, regulations, where and how to sell, how to connect with markets and government farm support programs, he says.

The state group is a member of the National Immigrant Farming Initiative, an advocacy group based in Washington, D.C., supporting immigrants who don’t have the capital or knowhow or don’t understand the American agricultural system or have limited English, explains the group’s Executive Director Rigoberto Delgado. He will also speak at the conference.

Delgado says immigrants are replacing the disappearing American family farmer, pointing out that the number of Latino farmers in the United States grew 14 percent between 2002 and 2007.

“They come with the American dream and a penchant for farming. We are like the doorway for immigrants and refugees to find their way,’’ says Delgado.

“We wouldn’t be here if it wasn’t for that program,’’ says Amy Doeun, 31, speaking about the Minnesota Food Association and Crazy Boy Farm, the land where she and her husband are beginning their first growing season, intent on producing 60 varieties of vegetables, from Swiss chard to tomatoes, as well as apples and strawberries, honey and chickens.

Theirs is a CSA (Community Supported Agriculture) farm, where consumers buy shares and receive boxes of produce during the growing season. 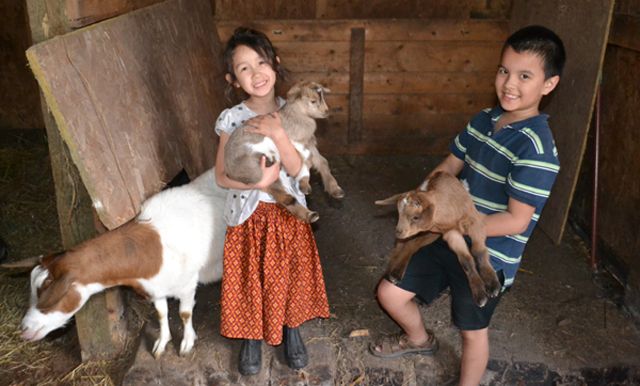 Photo by Amy DoeunAvril and Proeun II holding two of the family’s goats.

Through MFA, Proeun Doeun, whose parents farmed in their native Cambodia, and Amy learned everything from starting seed to starting a CSA farm, from applying for to receiving a loan through the federal Farm Service Agency to help fund their dream.

“Our goal,” Amy Doeun says, “is to be a meal farm, where people can get meat, dairy, fruits, vegetables and honey.’’  For now, she works full time on the farm, as well as mothering their children age 7 and younger while Proeun drives buses for Metro Transit.

They hope in seven years to make their farm their livelihood.

If you’re willing to be charmed by their quest, check out Amy’s  blog.

Posted near the top is a chicken story that ends this way:  “The first night we went out to close them in and ended up having to chase them in. The next night we waited until almost dark and they had gone in by themselves — way easier and so much fun.’’