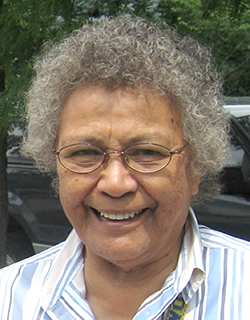 Elsie Elaine Fairbanks worked throughout her life to better the lives of American Indians, from mothers-to-be to those struggling with alcoholism to those just plain struggling.

Her work ended with her death Feb. 16 at 74 after a long illness.

Though she attained only a high-school diploma, her resume included work at the St. Paul American Indian Center, the Red School House in St. Paul and — for the last 24 years — the St. Paul Area Council of Churches’ Department of Indian Work. There she helped set up an emergency food bank feeding 100 Indian families a month and helped organize a Thanksgiving and Christmas gift-basket program serving as many as 250 families.

With her husband Juel, she founded and for many years sat on the board of what is now called Juel Fairbanks Chemical Dependency Services, a residential treatment center that uses native spiritual practices and culture to help American Indians attain sobriety.

Some also remember her as lobbying for Indian education classes in St. Paul Public Schools.

Small but fiery, Fairbanks was just as adroit at dispensing advice as social services, says her daughter Michele Fairbanks of St. Paul. “She would tell it like it is. Sometimes I would think, ‘Don’t say that, you’re going to offend those people.’ But people would tell me after, ‘I needed to hear that.’’’

“She would go to the women’s houses and say, ‘You know you have your appointment,’’ her daughter recounts. And if the woman said she wasn’t ready, Elsie Fairbanks would simply settle in and say, “I’ll sit here and wait.’’

“She would be gentle and loving but forceful, too,’’ her daughter explained.

Though she had lived in St. Paul for more than 50 years, Fairbanks, whose Ojibwe spirit name is Ma’iinganens, meaning “Little Wolf,’’ grew up in Red Lake, and clung to her roots. She knew Indian families well, who was related to whom.

People looked at her as their grandma or mom “in the Cities,’’ said her daughter.

Yet Fairbanks spoke very little Ojibwe, having learned little from her parents who had attended boarding schools where they were punished for speaking their native language.

Fairbanks was dedicated to her people and “instrumental in providing a warm place for American Indians to come to get food,’’ without feeling uncomfortable about their need, said Sharon Romano, director of the Department of Indian Work, where she worked until late last year

“She always was helping everyone; that’s what she looked forward to every day, going to work and helping the community,’’ said Renita Picotte, another work colleague

At Thanksgiving and Christmas through the St. Paul Area Council, Fairbanks coordinated gift baskets that included traditional Indian foods like wild rice. In late summer, she coordinated a drive for school supplies for low-income children.

Fairbanks also promoted the organization’s diabetes education and healthy cooking classes for others who, like she, dealt with diabetes.

Her generous spirit extended beyond 9 to 5 hours. When she would hear of people down on their luck and in need of anything from a bed to gas money to a free hall to hold a wake, she’d start making calls to contacts with local Indian tribes until the problem was solved, her daughter said.

“I was truly amazed by how many people she had touched,’’ Fairbanks said of her mother, who was remembered at a wake Monday night at the St. Paul Area Council of Churches that drew 200 people to share memories and heaping plates of wild rice, hominy, fry bread and venison.