For Rich Evans, his own place at Nicollet Square is a far cry from the days he waited in line for a bed at a downtown Minneapolis homeless shelter.

Instead of a mattress on the floor among a sea of strangers, the formerly homeless young man rents a 380-square-foot studio in a new, 42-unit building with large windows and strikingly modern furniture.

“It’s my own spot. It gives me a chance to be independent and a place to go when I want to be alone,’’ Evans, just 22, told me as he mused about his past and dreamed of a future return to college.

With round-the-clock security, it’s also a safe place for him to come home to after work at the nearby Salvation Army Thrift Store in his south Minneapolis neighborhood.

It’s housing as well as services to help homeless youth find jobs and build better lives that advocates are arguing strongly for at the Minnesota Legislature this session.

And why they cheered Gov. Mark Dayton when he included in his two-year budget, released March 14, a request for $5 million in funding for youth homelessness prevention that includes shelter and other services.

Though a spectrum of advocates united in a Homes for All Campaign this session are asking for $8 million for the Homeless Youth Act, they see the administration’s funding request as a giant step forward from the current $238,000 funding level.

“Making sure young people in need have a safe place to sleep and the help they need to get back on their feet is critical to creating a Minnesota where everyone has a fair chance at life,’’ said Minnesota Department of Human Services Commissioner Lucinda Jesson, pointing to the scarcity of beds and services for homeless youth.

Whether the funding is there is a matter still being considered by the DFL-controlled Legislature, but the need certainly is.

In some areas of the state there are few or no services or housing for homeless youth, DHS officials say. Currently, services for unaccompanied homeless youth across Minnesota include six homeless drop-in centers, 108 emergency shelter beds and about 600 units at transitional living programs and permanent supportive housing.

The most recent — though preliminary — count of unaccompanied youth coming this month from Wilder Research’s triennial statewide homelessness study, tallied 1,151 youth 21 and under on their own across the state. That’s about a 10 percent decrease from the last count of homeless persons in fall 2009 — perhaps due to a better economy or new youth housing programs.

Yet those who work with homeless youth maintain that the group is typically undercounted. In 2009 Wilder researchers and other experts estimated the real number is closer to 2,500 any given night. More current numbers are due this spring.

Blons said youth from troubled homes often begin about age 14 to couch-hop with friends or extended family or to sleep on buses. Often they’re fleeing physical or sexual abuse at home or parents’ addiction to drugs. Some of them are forced from their homes by families who object to their sexual orientation, she said.

“What’s amazing,” she said “is their survival skills. About half are going to high school” and some are already working, though a slow economy made that difficult and it’s hard to sustain employment without a permanent address, she said.

Opened about two years ago, Nicollet Square, 3700 Nicollet Ave. S., is operated in conjunction with YouthLink and HIRED, which provide onsite support services to help with a range of issues, from recovery from sexual or physical abuse to learning how to open a bank account or enroll in college, to employment counseling. Funding from the Minnesota Housing Finance Agency helps make rent more affordable.

In the same building, there’s also Butter Bakery Café, owned and operated by Dan Swenson-Klatt, a former school teacher who not only whips up lattes but dishes out life advice to some Nicollet Square residents.

In the sunny storefront gleaming with granite and stainless steel, he provides on-the-job training and work experience in three-month internships. It’s a role Swenson-Klatt relishes. “For the most part kids come in here with not a lot of confidence in themselves,” he said. “Our goal is to encourage their belief in themselves” and their work skills.

This is the first of three youth apartment buildings Beacon plans, including Prior Crossing in St. Paul, now underway, and a future project in the west-metro suburbs. The biggest barrier to completion of the projects is lack of funding for supportive services, Blons said.

Nearly 80 percent of the 60 residents have remained in permanent housing at Nicollet Square or elsewhere with all of those able to work working. More went on to post-secondary education than expected, while fewer than projected achieved a high school diploma or GED. 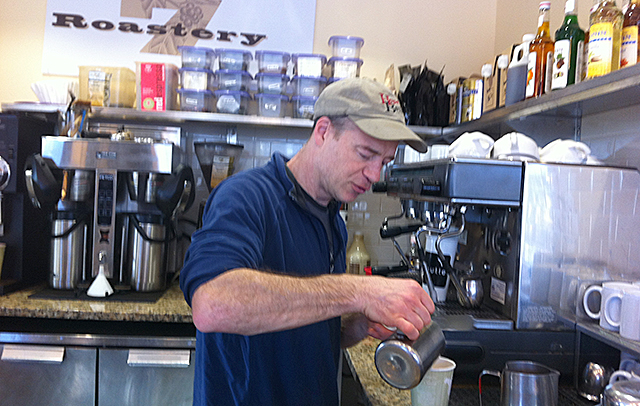 As for Evans, he looked for a place to sleep most nights for a year, including with family, at emergency shelters and temporary youth housing facilities, until he learned about Nicollet Square and moved there in December 2010.

From a rocky family history, he was adopted by a Wisconsin couple who told him after he had graduated from high school and won a basketball scholarship to a state university that he was on his own.

Evans washed dishes at a nursing home to help pay his way, used savings and took out a college loan, but the money ran short and the loan was in arrears, he said. Summer vacation arrived and he had no place to live.

The low point came when at age 19 he had to bunk in a shelter with homeless men much older than he. “I just minded my own business. I didn’t talk to nobody,’’ he said about the experience.

His studio apartment includes a kitchen, bathroom and a sleeping and lounge area with a walk-in closet big enough to store his bicycle.

He describes his apartment as affordable at $305 a month and “nice,” and his life as “pretty good. I’m trying to get things flowing, like school, getting into my career as soon as possible.’’ He hopes to pay his college loan out of default in nine months and then return to school.