The day before they bought their big stucco house in the Phillips neighborhood in 1990, Joani and Tim Essenburg dropped by for another look.

The former kindergarten teacher and the college professor thought they knew what they were getting into. After all, they’d made a conscious decision to buy in a low-income, high-crime Minneapolis neighborhood to try to make a difference.

Only what they encountered that day gave them pause: the neighbor’s garage was still smoking from a fire intentionally set the night before, the house they intended to buy had been broken into and defaced with gang graffiti.

They hoped in a small way to build community and change lives in Phillips and they wanted to live in the neighborhood to do it.

More than 20 years later, they’re well along that path.

What started with Joani bringing cookies and friendship to 12 families on her block has developed into Banyan Community, a non-profit organization that provides after-school tutoring, mentoring and summer youth programs to 120 children and social support to 75 families.

Today, Banyan kids are graduating from high school — 21 so far. Some are the first in their families to do so. Most go on to college.

Banyan adults are rallying together in block clubs to fight street crime in their neighborhoods.

Banyan families are staying put because they see this Christian community development program with its web of community connections as their ticket toward a better life. Banyan provides the educational and social supports families need to see their children graduate from high school and go on toward post-secondary education and, hopefully, enter the middle class.

“We moved with the intent to live in a low-income neighborhood and live out our faith…The big vision grew over five years living there, maybe seven years,’’ explained Tim Essenburg, co-founder with Joani of Banyan and an economics professor at Bethel University in Arden Hills.

Their motivation is to love God and love their neighbors, said Joani Essenburg, who changed careers, picking up a degree in the non-profit field to become Banyan’s  executive director. 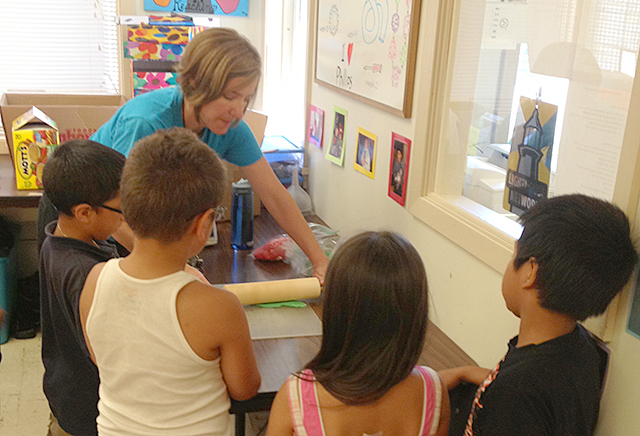 Now the organization is entering a new phase. With 100 children and their families waiting for services and programs bursting at the seams in rental space at the former Oliver Presbyterian Church on Bloomington Avenue, as well as facing the sale of that building, Banyan this spring kicked off a $5 million capitol development campaign to put up their own 36,000-square foot building. 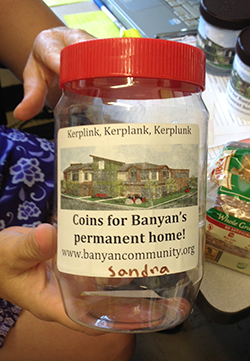 It’s there they want to build the Banyan Community Center so they can double their services to work with 150 families and 250 kids from a 50-block area in the densely populated Phillips where 44 percent of residents live below the poverty line.

U.S. Census data from 2010 paints a picture of a diverse, financially  strapped neighborhood with almost equal percentages of blacks and whites, closely followed by Hispanic people and then other racial groups. The median household income is $28,850, compared to $46,232 for Minneapolis as a whole.

Almost 20 percent of residents speak English not at all or not well and more than 40 percent are foreign-born. Unemployment is high but so is the number of parents working two or more jobs.

Back in 1990, even before the moving van arrived, neighbors were betting the Essenburgs wouldn’t stay. And, truth be told, it was a struggle. Their home was broken into two weeks after they moved in.

But they stayed. In 1992 they shepherded neighbors together to form a block club to fight crime. Now there are 11 block clubs.

Even in the mid ‘90s when Minneapolis was dubbed “Murderapolis’’ because of a record high number of murders and gang activity, the Essenburgs and their neighbors persevered.

“We heard at least 1,000 gunshots” in the neighborhood one year, Tim said.

For years Joanie walked their children – six in all — to the corner school bus stop, asking drug dealers and prostitutes to “move aside, please.’’ In 2003 they and their neighbors petitioned the city to change zoning to enable them to convert a “drug house” on the block into the first Banyan facility.

Even now with much safer streets and public safety crime-prevention devices in place, including cameras, “No one in their right mind would live here, quite honestly,’’ if they could afford to move away, Joanie said.

“That’s where Banyan comes in. We live in a broken and unsafe neighborhood, but Banyan, I believe, brings wholeness and safety. We help families to connect,’’ Joani said.

The organization, which became a 501(c)3 nonprofit in 1998, works with families to educate their children. For instance, they empower parents to move their children to high-performing schools and provide academic and social support.

So far every child sticking with Banyan has graduated from high school, with most going on to college. They gain volunteer and work experience with Banyan and then go on to intern with businesses Banyan has connected with. 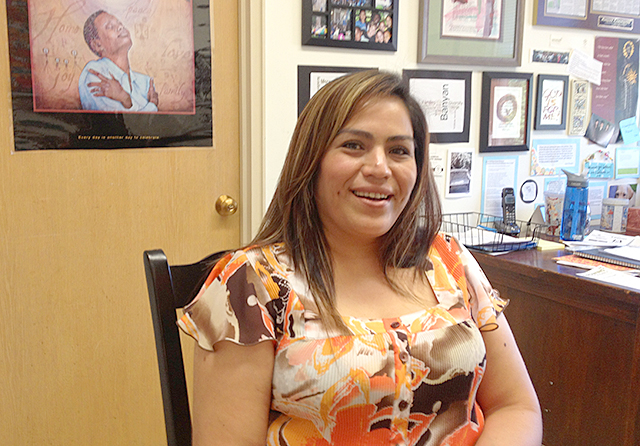 MinnPost photo by Cynthia BoydMaricruz Arocho, a mother of children enrolled in Banyan programs and a family advocate.

“When a family is connected to Banyan, Banyan will help nurture the family and walk through the application process with them and [academically] support them,’’ said Michael O’Keefe, the school’s vice president for enrollment.

Take Aidee Arocho, 18, who graduated this spring from De La Salle and heads off to Hamline University in St. Paul this fall after a summer internship with Wells Fargo.

She’d balked about leaving her public-school friends to go to a private high school, but her parents, Michael and Maricruz Arocho, stood firm.

“My mom didn’t give me an option. She said, ‘You’re taking the scholarship,’’’ Aidee said, and she’s glad she did. Without Banyan, she wouldn’t be where she is today, she said.

“For me, [her graduation] is like a trophy and I’m a mom. Imagine what it is for her,’’ said Maricruz, who grew up in a Mexican village and whose employment history includes waitressing and factory work.
Banyan is like a helpful extended family, said Maricruz, who now works there as a family advocate, helping Banyan families navigate problems. Michael Arocho works for the city of Minneapolis and volunteers in a youth program at Banyan.

How one couple made a difference in a troubled Minneapolis neighborhood