Coming of age in Minneapolis, Fardosa Hassan dived with enthusiasm into any community-service opportunity that contributed to helping society and improving the city.

The mere mention of Washburn High School in Minneapolis reminds Hassan of a list of activities and community services she got involved with before she graduated about four years ago.

“You have to give back to your community,” Hassan said. “Some people don’t have the opportunities I had. I feel like I owe them a lot.”

Hassan said her participation in community service and civic engagement gives her peace of mind — and validation that her presence in the world could play a role in the betterment of the society.

Today, hundreds of youngsters in the Twin Cities benefit from the mentoring Hassan has been providing since December as youth coordinator at Interfaith Youth Leadership Coalition (IYLC).

A program of the Saint Paul Leadership Coalition, IYLC brings together Christian, Muslim, Jewish, Hindu, atheist and other middle- and high school-aged students. The program helps young people by promoting interfaith understanding and reducing prejudice and misunderstanding through dialogue and community service.

The students discuss racial and ethnic diversity, cultural differences and issues  important to them and to their peers.

At a time when religious actors sometimes use faith as a manipulative political thorn, IYLC gives young people a chance to learn from one another — not from the media, which Hassan said, misinforms people about faith and religion.

Some African and Arab countries are now engaged in bloody violence in part because of clashes fueled by religious-inspired conflicts.

“Religion is a controversial issue in world affairs,” Tjaart Barnard, a professor at Stellenbosch University in South Africa, says in his study on religious war. “Especially in Africa, religion has been at the heart of much of the contemporary conflicts. Religion is often depicted as a trigger factor in many conflicts.”

Despite some heinous acts perpetrated in the name of religion, the IYLC team tries to point out misconceptions about religions and calls the youngsters around the table for dialogue.

“It’s so easy to have tensions increased because people do not understand one another’s background,” said the Rev. Patricia Lull, executive director of the St. Paul Area Council of Churches.

The group members then propose solutions, taking them to the program’s annual events — which bring together hundreds of people — and announce action plans such as creating service-learning opportunities, local justice initiatives and service projects.

“They’re young, but they really are determined to make a difference,” Hassan said of the committee. “During those events, they’re the ones who run the show.” 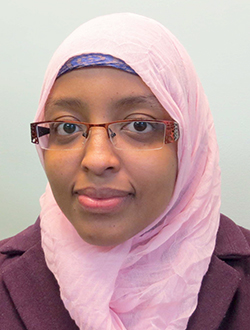 Amy Kreider, who graduate from South High School this summer, took part in the program.

All her life, Kreider has lived in Minneapolis, which she described as a “very culturally and religiously diverse” city.

Instead of sitting back and assuming, Kreider said, she joined IYLC to ask any cultural and religious questions that crossed her mind.

One of the lessons Kreider learned: “Asking questions is a lot better than not asking questions and assuming. A lot of people are afraid to offend somebody [if they ask questions], so they just assume things.”

When Hassan was around Kreider’s age, she didn’t get the opportunity to discuss faith with peers. In fact, Hassan turned a deaf ear to conversations and activities about faith.

“I didn’t want to talk about faith,” Hassan recalled. “I was involved in many civic engagement programs, but my interest was never in faith.”

Hassan’s attitude towards faith and religion changed when she attended Augsburg College, where she graduated last year with majors in sociology and international relations and a minor in religion.

The required introduction to Christianity courses, she said, helped her become more knowledgeable and confident about her own religion, Islam.

“I would read about Prophet Abraham in Christianity; then I would read the Quran to learn what Islam says about him,” Hassan said. And she did the same for other topics she learned about in her study of Christianity.

For months now, Hassan said, she has been inviting Twin Cities mosque leaders to bring their youth to IYLC events, but to no avail.

Hassan thinks that some Somali-American Muslims fear their participation in interfaith discussions will cause their faith to fade and melt into other religions.

“No, no one is converting the other,” she said. “It’s about talking about your own religion to others, and asking questions about what you don’t know about other religions.”

Not everyone in the Muslim community, however, thinks like Hassan and Lull.

Some community members have questioned Hassan about her work with IYLC. They argue she or any Muslim should not associate with such groups.

When some Muslim religious leaders stood side by side with their Christian, Jewish and Hindu counterparts at Central Lutheran Church in Minneapolis in 2010 for “interfaith services,” other Somali community members accused them of entering the church and performing prayers with non-Muslims.

Through local Somali media, some declared that those who participated in the services lost their faith.

So some Somalis are cautious about entertaining the idea of participating in any interfaith program.

“She does some work that not everybody gets excited about,” said Lull, who has known Hassan for the past four years. “I admire her courage and her bravery.”

Despite the opposition of some in  the Somali community, Hassan continues to encourage Muslim youth to be part of IYLC.

“If you don’t explain your religion to those who are interested, then other people who know nothing about Islam will do the work,” she said. “Also, IYLC isn’t all about religion talks. It’s about community services. It’s about teaching tolerance. It’s about creating a better place for all.”