For some Somali women, having lighter skin tone is the ultimate beauty goal and they use skin products containing dangerous chemicals to reach that goal, according to a new University of Minnesota study.

“To be a beautiful Somali woman, one has to have lighter skin color,” Amira Adawe, co-author of “Skin-Lightening Practices and Mercury Exposure in the Somali Community,” said in a recent interview describing the attitude of some women.

Several Somali women who were interviewed for the study published in July said they mix products that include lemon herbal whitening cream, lulanjina, diana and dermovate — some of which have mercury, a poison that can damage the nervous system, according to the study.

“These chemicals are proven neurotoxins and have been linked to birth defects if used by women during the prenatal period,” stated the study. “Inorganic mercury exposure is associated with rashes, skin discoloration, scaring, secondary bacterial and fungal infections, and even renal impairment and damage to the nervous system.”

The study added: “It should also be noted that mercury … can be transferred from mother to infant through breast milk.”

The Minnesota Department of Health recently tested 27 bleaching products, 23 creams and four soaps. The department found that 11 products contained mercury levels ranging from 135 to 33,000 parts per million. “This has prompted both state and federal health officials to issue warnings about the use of these products,” according to the study.

Although Minnesota law bans beauty products that contain mercury, the study said that immigrants have been smuggling the cosmetics from Latin America, Asia, the Middle East and Africa. The products are then secretly sold in Twin Cities-area stories.

“This is not practiced by only Somali women,” said Adawe, a health educator at St. Paul-Ramsey County Department of Public Health. “It’s widely used by Hispanics, Asians and African-Americans.”

There are various reasons some Somali women rub their body twice a day with skin-bleaching substances, the study stated. Some of them use the chemicals to get rid of the facial masks of pregnancy, which are pigments women develop during pregnancy. 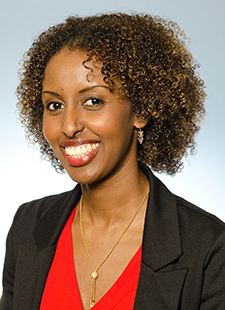 These pigments often appear on cheekbones, forehead, nose, forearms and other parts of the body that are exposed to the sun. Women with darker skin are more prone to skin pigmentation than those with fair skin tone, health reports suggest.

The study indicated that women also use skin-lightening products to attract men. “They see having light skin as more socially acceptable and believe it will increase their chances of finding a husband,” according to the study.

Adawe, who was born in Somalia, said she knows many Somali women who use the products. “You can tell who uses it and who doesn’t,” she said. “You can’t mistake it with naturally light-skin people. These creams give people more of yellowish color.”

Adawe said the women who use the products often aren’t open about the practice. “Actually, they’ll deny when you ask them,” she said.

Growing up in Mogadishu and in Minneapolis, Adawe said she encountered many women who regularly used the skin-lightening products. She said became involved in the study a few years ago after coming across an article about bleaching cosmetics that reportedly contained mercury. Adawe said he began to worry about the health of women she knew who used these products, so she started investigating the issue in 2011.

After several interviews with Somali women in the Twin Cities, Adawe learned that some of the women used products containing mercury. Adawe then took her findings to officials at the St. Paul and Ramsey County health department. Soon after, the FBI raided stores in Minneapolis and found Minnesota-banned skin-lightening products and took action against owners, said Adawe, a public health graduate student at the University of Minnesota.

Adawe’s investigation prompted the study, thanks in part to her professor and mentor, Charles Oberg, who co-authored the research paper.

Adawe’s is working to tell others about the dangers of skin-lightening practices by speaking out at community and educational forums, appearing on radio and television shows, and meeting with leaders and activists of the Somali community.

Adawe also engages in conversations with 244 members of the Somali community on a Facebook page she created named “Skin-lightening practices & chemical exposure among Somali women.”

Members share articles, videos and studies about the risks of skin-lightening practices, and they discuss ways they can help limit such practices.

On June 11, Adawe posted on the page: “To those of you who are scholars or know the Islamic religion well, can you please educate us about what Islam says about skin-lightening practices?”

Awil Egal, a group member, replied: “Islam has forbidden men or women to change the creation of Allah: Skin color, hair color and the likes. ”

Egal added: “Using cosmetics, creams and other things that are made from chemicals or impure substances and which may have dangerous side effects is definitely haram [forbidden]. It is also another form of deceiving that can create mistrust between people.”

Adawe is optimistic the Somali community will understand the risks of the chemicals. And with social media, she said, she’s even more hopeful that the people will be informed faster.

“Everybody is on Facebook and Twitter these days,” Adawe said. “Social media is a great tool to use for spreading awareness on issues like this one.”

Adawe said there are significant numbers of Somali women satisfied with their natural skin tone and don’t consider using the skin products.

“It all depends on their confidence and level of education,” Adawe said. “Uneducated people tend to use these products more often.”