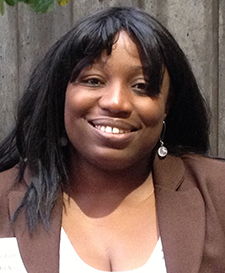 You never know quite know what’s going to be served up when folks at the Wilder Foundation want to make a point.

Wednesday it was Robin Hicks.

At 37, Hicks has a story to tell, being she was born to a 13-year-old mother and began life against a backdrop of poverty and violence.

Poverty in the city of St. Paul was the theme of the morning at “a community conversation about poverty” led by MayKao Y. Hang, immigrant, president and CEO of the Amherst H. Wilder Foundation, a non-profit health and human services organization in that city.

Twenty-four percent of the city’s residents — that is 67,000 people — live in poverty, including 25,000 children, Wilder Research scientist Allison Churilla reported.  From kids to the elderly, those 1 in 4 living below the poverty line would fill Xcel Energy Center about four times, she said.

I don’t know how close those numbers are to any specific St. Paul data which might eventually come from the U.S. Census Bureau.

But I can tell you that data released today for what the federal government calls the Minneapolis area show a small decline. The latest data shows that 10.7 percent of people in the Twin Cities area were living in poverty in 2012, which was not statistically different, given the margins of error, from 11.0 percent in 2011.

The state poverty rate declined from 11.9 percent to 11.4 percent, meaning 23,000 fewer people are classified as poor. Advocates argue that any poor are too many.

The child poverty rate in St. Paul is 36 percent compared to about 15 percent across the state as a whole, according to Wilder Research. That means about three-quarters of St. Paul public school children qualify for free or reduced-price lunch.

The numbers are sobering because the American dream of social and economic mobility today is “less true that it has ever been,’’ said Hang, who came to this country at age 4 with her parents and started out poor.

Though their numbers are substantial, the economically disadvantaged today have become invisible, lacking the social connections, access to opportunity and the skills they need to do better, Hang said. Poverty leads to illness and shortens life expectancy, she said.

She grew up in Minneapolis in a low income family, short on food, stability and a consistent place to call home, though feeling loved. “My mother gave me what she had, which was love,” Hicks said.

Poverty is more than a lack of money and a dearth of material possessions, Hicks told us. It’s a way of life, a “mind-state.’’

“If I could rename poverty, I would call it a silent killer,’’ said Hicks.

By age 13 she ran with a neighborhood gang, by 16 she had her first child, a boy. During her teen years she was stabbed five times and shot in the back.

Poverty, Hicks said, is debilitating. It kills your trust. “It kills your hopes and dreams,” she said. She never learned about saving money or keeping a job or good work ethics or the importance of education, she said.

By age 20, she told me, she’d given birth to a daughter and reached an epiphany. She didn’t want her daughter to live as she had lived, “moving from house to house, not having enough food. I didn’t want her to be made fun of, to have her hair messed up, her clothes dirty, and bullied and picked on as a young girl.’’

She found support and inspiration from her husband, her mother, her father who owned a small business, and the Rev. Jerry McAffee, pastor at New Salem Missionary Baptist in north Minneapolis.

Hicks went on to earn her high school equivalency degree. She has a bachelor’s degree in business management and a master’s degree in marriage and family therapy. Now a mental health counselor in Wilder’s Kofi program she works with African-American youth and their families at seven St. Paul schools helping children realize the importance of education and overcome any trauma in their lives.

Hang closed the conference with an exhortation.

“I ask all of you to work on seeing poverty,” to give, and to work on solutions rather than judging. “Some of us didn’t grow up with boot straps, or even boots.’’

Born poor, a mother at 16, stabbed five times, shot — and then a new life