This is the story behind the start-up last April of The Lift Garage, the godsend for low-income folks with ailing vehicles and the brain child of Heying, a woman with social-work and pastoral-ministry credentials, a woman now as comfortable adding oil to a vehicle as oil to a salad.

The tale starts way back this decade when Heying was director of social justice at St. Stephen’s, a Minneapolis church that helped shelter the homeless.

Minneapolis people struggling to pay their rent and feed their families kept coming to her asking for money to repair the cars or trucks they needed to get to work. No car, no job, they told her, as city people increasingly found employment in Twin Cities suburbs. No job, no money for housing.

Some even used their vehicles for overnight shelter.

But there was money only to get people — not cars — up and running.

And so, Heying, 43, who by 2008 was working for St. Stephen’s Human Services, a now nonprofit entity which had separated from the church and focuses on helping the homeless into housing and helping them stay there, registered in an automotive services program at Dunwoody College of Technology in Minneapolis.

The learning curve was “huge’’ and she was often discouraged, she said, laughing at the memory of working shoulder to shoulder with “18-year-old boys” who knew way more than she did about cars. But she was driven by purpose.

Support for her and her idea spread at the college and in the community. Just recently she received an award for her work from the Minnesota Coalition for the Homeless.

“The idea is by repairing cars we’re helping [people] take a step toward financial stability,” she told me last Saturday, the smells of grease and oil overpowering the sweet smell of marshmallow cereal bars in the waiting area at the back end of Dan’s Nicollet Car Wash. Here The Lift Garage rents three bays.

So far, they’re able to afford service only on Saturdays at the 59th and Nicollet Avenue location, though there’s a waiting list and the number of volunteers supporting the program is ever expanding.

Since the program opened they’ve repaired about 50 cars, Heying said, a laborious process because vehicles are often old and rusty and maintenance has usually been deferred because their owners can’t afford the cost. Sometimes it’s hard to get parts.

The nonprofit owns only basic scanning tools. Heying, a paid staff member and volunteers repair or replace brakes, heaters, fans and struts, do oil changes and other repairs operating on a $50,000 annual budget. Heying says they need an additional $100,000 to open their doors five days a week.

She, meanwhile, works at The Lift Fridays and Saturdays, earning her paycheck from St. Stephen’s Human Services as a human-rights advocate four days a week.

For clients, who must qualify by income, the price is right. That plays out to an annual income of $17,000 or less for an individual and $24,000 or less for a family of four.  Labor rates are $15 an hour and parts are sold at cost, so the bill to clients is significantly less than repairs at other garages. Service is by appointment only.

Staff mechanic John Buttner poked his head under the hood of a rust-riddled Chevrolet S-10 pickup with a sheet of cardboard blocking the cold where a back window should be. Bags of clothes and groceries, a cooler and kitty litter crowded the back of the truck.

There’s a blower motor problem with the heater, he said.

Living in her car

Lacking heat is more than an inconvenience for Linda, 58, the vehicle’s owner, because for the last month she’s been using the car for housing, parking nights in safe residential or commercial areas while she looks for a job and a place to live.

“When I park, I want some privacy,’’ she told me, explaining she sleeps in the driver’s seat and her orange and gray tabby, Oreo, curls up on the other front bucket seat. For privacy reasons, she wouldn’t share her last name.

“The last couple of nights have been kind of rough,’’ with temperatures hovering around the 30s, she said. 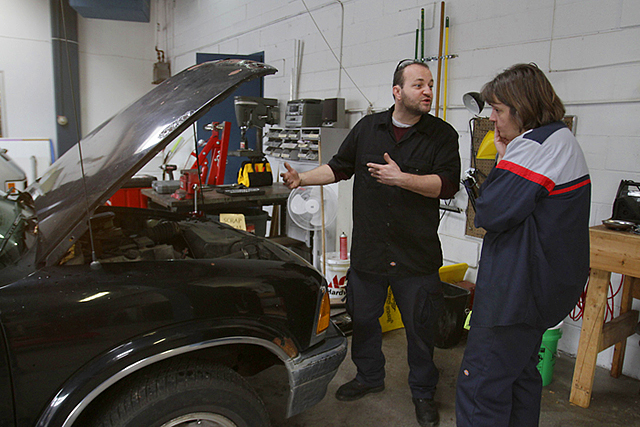 Though Linda receives General Assistance and food assistance, the dollars don’t stretch far when she’s paying for gas to stay warm, she said. She’s saving up to buy her $42 license tabs come Nov. 1.

Can she stay in a shelter? “I will not,’’ she said, not only because they won’t take pets but because she fears her belongings will be stolen while she sleeps.  Linda shows me a stack of business cards from nonprofits trying to help her.

As for the blower? Buttner is hoping he can find an affordable repair.

Often, Heying said, they have to tell owners the cost of a repair is worth more than the vehicle.

If The Lift weren’t so affordable, Maurice Hughes wouldn’t be at the garage having his wife’s Dodge Ram serviced, he said.

Besides, he said, they did a good job on routine maintenance for his 1998 white Malibu, which hadn’t been serviced in two years because he couldn’t afford it. He’s “saving up” to replace the battery before the weather turns bitter.

Money is tight in his household. His wife is a home-care worker whose former employer has been in the news for being in arrears with payroll, and though Hughes just finished training as a road construction machine operator, he’s still an apprentice. He worked for a moving company this summer, but now that work is slowing and he’s hoping for a construction job at the Vikings stadium.