At 45.5 percent, Minnesota has the lowest on-time high-school graduation rate for its Native American students of any state in the country. Though acknowledging that hard truth, a new report by the Minnesota Campaign for Achievement Now (MinnCAN) reflects hope.

The report, “Native American Student Achievement in Minnesota,” not only focuses on some of the programs that are working for Indian students, but it is also a clear statement of Indian people’s commitment to help their children.

Said Gerard Sorderlet Sr., chairman of the Cloquet Local Indian Education Committee and an enrolled member of the Fond du Lac Tribe: “On the reservation we have a lot of addiction and a lot of poverty, and the only thing I know that can change that cycle is education.’’

The study showcases three programs where students are making strong academic gains and suggests that is because the schools:

They were chosen, according to the study, because the Minneapolis program “consistently made tremendous gains in kindergarten readiness” and because Churchill and Detroit Lakes students’ scores on reading and math proficiency tests put them into MinnCAN’s Top 10 lists for Native American Achievement.

“We sought hope and it turned out we didn’t need to look far. The expertise we need to reverse the numbers is already hard at work in Minnesota,” said Jacqueline White, researcher and co-author of the report.

White and Daniel Sellers, executive director of MinnCAN, say the report is significant, too, for its indigenous bent. They talked with and listened to indigenous leaders, educators, parents and students as well as visited schools where hard data documents the academic success of Indian students.

The study credits Minneapolis Public Schools and the Native American community for being the first in the country to formally agree to work together to improve Indian student achievement and to set specific educational plans and goals, including at three Indigenous Best Practice school sites.

Tests show, according to the report, that the pre-kindergarteners in the High Five language immersion program at Anishinabe are “more ready to learn and less likely to have behavior problems than children not in the program — an advantage that carries over into kindergarten.’’

At Churchill Elementary in Cloquet the key to educational achievement appears to hinge on student scrutiny and testing. The school year begins with extensive student testing, followed by a staff retreat where educators pore over the results to decide what level of intervention each student needs.

“Data drives what we do,’’ Principal David Wangen is quoted as saying. 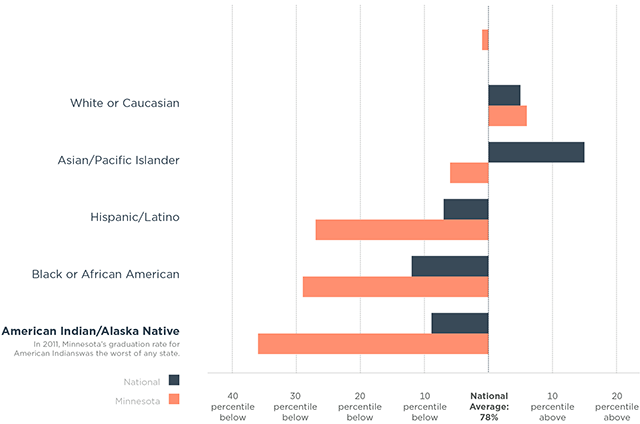 Source: MinnCANThe 2012 number for American Indians is 45.5 percent, an increase.

But culture enters in as well. Phil Beadle of the Fond du Lac Ojibwe and coordinator of Churchill’s American Indian Education Program said: “We went from a cultural program with academic components to an academic program with cultural components.’’

According to the report, just a few years ago at Detroit Lakes Middle School in Detroit Lakes where the student body is heavily poor and 12 percent Native American, children were not making Adequate Yearly Progress, as measured by the No Child Left Behind program.

But a new school culture has teachers teaming up to reinforce lessons and making it harder for children to fall through the cracks.

“We made getting a zero not an option. We circle back and almost require a retest,’’ said Detroit Lakes’ assistant principal Justin Hegg. “We’re not leaving that kid behind.’’

Among other changes, the school has built stronger connections to parents of Native American students.

The report takes a brief, historic look at what it calls the “boarding school legacy” from a time when Indian children were separated from their families and forced into boarding schools.

“We have a history of education being used as a weapon against our people, so there’s a lot of mistrust,” saidDeanna StandingCloud,  a Red Lake Ojibwe who works in Indian Education in the Minneapolis Public Schools.

Kelly Drummer, president and CEO of the Minneapolis-based Tiwahe Foundation, applauds the report’s approach. “This report is a welcome departure from so much of what gets written about the native community, which puts a discouraging focus on the problem,’’ Drummer told MinnCAN.

Drummer said the report is “reframing our conversation about the ‘achievement gap’ in a way that will allow us to move forward in a positive way and build on our successes.’’