The Dorothy Day Center, a homeless center run by Catholic Charities, needs to expand by moving out of downtown St. Paul because it has grown so overcrowded that people must spend the night on floors, officials said Friday.

It was built in 1981 to help up to 50 people a day, back when it appeared there was a temporary increase in the number of homeless in the city. The need hasn’t decreased; instead, Dorothy Day now shelters up to 250 people a day.

Faced with the ongoing, and growing, need — and with little ability to expand in the current downtown location across from the Xcel Energy Center — officials are proposing to expand by building a new facility near the Ramsey County Law Enforcement Center, northeast of downtown.

“What’s happened at Dorothy Day is a tragedy. We need a whole new vision,” said Tim Marx, CEO of Catholic Charities of St. Paul and Minneapolis. “We can’t tolerate letting people sleep on thin mats when we know there’s a better way.”

The $63 million plan, proposed by a task force, comes in two phases: the first calls for building a combined shelter and permanent housing facility, with a connection center, for a cost of $39 million.

“If all the stars align,” Marx said, “the first phase could open as early as 2016, with the second phase coming a year or two later.”

Officials will ask for $22 million from the Legislature in the state bonding bill to get the project started. They’re prepared to find non-state funding for the rest.

“The time is now, during this legislative session, to rally the community,” Marx said.

Marx said the proposal is patterned after Catholic Charities’ successful Higher Ground project in Minneapolis. The St. Paul proposal would create a larger facility than in Minneapolis, because there are fewer options for the homeless in St. Paul, he said.

The proposed St. Paul shelter and housing facility would be built to house up to 470 people — “in dignity,” organizers stress. It would include “pay-for-stay” rooms and a “medical respite program.”

The connection center, they say, would be a “hub of resources for those at risk of becoming homeless or those working to move up and out of homelessness.” It would include computer labs and training, job referral, meals and permanent housing resources.

Mayor Chris Coleman said that he doesn’t consider the proposed new location to be far from the downtown core.

“We’re not shoving them into a corner, it’s more building a campus-like situation, that will help create a path out of poverty,” he said.

In the past, there has been some negative reaction when suggestions were made to move the homeless shelter out of the downtown core. Some thought it was an attempt to cover up the problem, or hide the homeless from view.

During the 2008 Republican National Convention in St. Paul, tarps were put up to screen the center from the delegates (and media) gathered across the street. At the time, officials said they didn’t want to hide the homeless but were working to protect their dignity.

Now, officials acknowledge that the current site, across from hockey arena, may not be the best location for the center.

The task force report notes that with the millions of dollars of investment in the nearby area for entertainment, health care and retail in the area, the Dorothy Day location has become “increasingly incompatible, particularly given the concerns of some of those served at the Dorothy Day Center of being on display.”

But Matt Kramer, president of the St. Paul Area Chamber of Commerce, emphasized that any talk of development of the existing site is well off in the future. “This is about fixing a crisis. We can’t have people who have hit rock bottom, and are there seeking help for a relatively short time, sleeping on the floor.”

Coleman agreed. “This is based on the need of the clients, not a need for the location. That would be a side-benefit in the future, I guess.”

Indeed, at some point the existing Dorothy Day site, located on West Seventh Street, near the entrance and exits into downtown St. Paul from I-94, would clearly be an attractive site for developers. 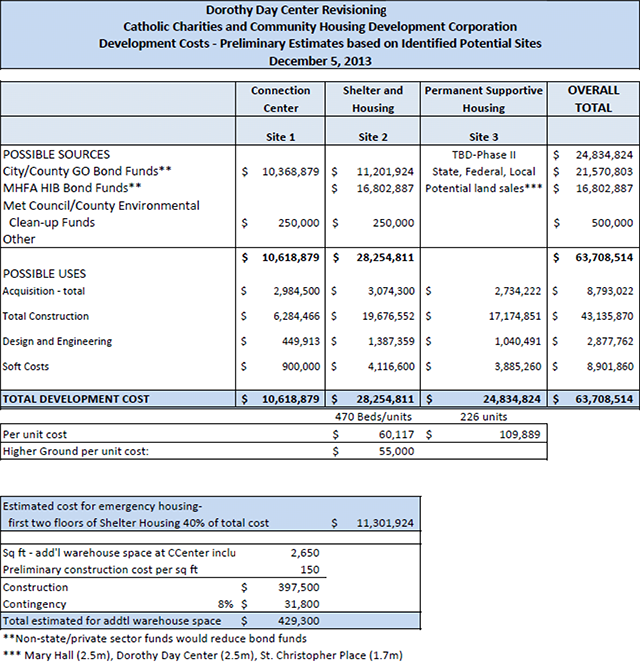