They stand at freeway exit ramps holding signs, wait outside soup kitchens for their meals, grab a little shut-eye at our public libraries and often overnight on thin mats at shelters: homeless people whose faces most of us barely register before we turn away.

Only this time of year the community of people who work with the homeless and those who have known homelessness memorialize those of them who have died in 2013, people whose passing might otherwise go unremarked.

With ceremony and sincerity, the names of more than 130 people, including a 2-year-old child, will be read and their lives remembered at the 29th Annual Homeless Memorial March and Service today, Dec. 19, beginning with a march and silent vigil at 5 p.m. starting from the Hennepin County Government Center on Third Avenue S. and Fifth Street S., in downtown Minneapolis.

A public Service of Remembrance follows at 6:30 p.m. at Simpson United Methodist Church, 2740 First Ave. S in Minneapolis, along with a 7:30 p.m. meal.

As of Wednesday, there were 137 people to be remembered, compared to about 100 last year, despite official 2013 tallies of homeless veterans and chronically unsheltered people in Minnesota generally showing a downward trend, as reported in MinnPost. The numbers of homeless families recorded by the federal government last January had increased, however.

Also today, state officials will announce details of a statewide plan to prevent and end homelessness, capitalizing on programs that are reaping success and laying out additional strategies to end homelessness, particularly for families with school-aged children.

The plan is the work of a new Minnesota Interagency Council on Homelessness — the collaboration of 11 state agencies — developed under Cathy ten Broeke, who was named state director to Prevent and End Homelessness in February.

Last year the Legislature approved $33 million in funding for housing and homelessness-prevention programs.

Remembering lives of the homeless

Among those memorialized at today’s march is Edmund Dawson.

“I’ve known him my entire career at Simpson, 12 years. He spent a lot of time being homeless… We called him Tony,’’ recalled Brian Bozeman, manager of the overnight shelter at Simpson Housing Services.

The “good-looking” man was known for his willingness to lend a helping hand and his sweet tooth. He worked hard to stay sober. His trademarks were an ever-present hat and “a very big, welcoming smile,’’ Bozeman said.

Probably in his 50s when he died this fall, Dawson had finally settled into Minneapolis public housing a few years ago, but homelessness, complicated by years of battling chemical dependency, had taken its toll. Dawson, originally from South Bend, Ind., died of complications related to his being on kidney dialysis, Bozeman said. 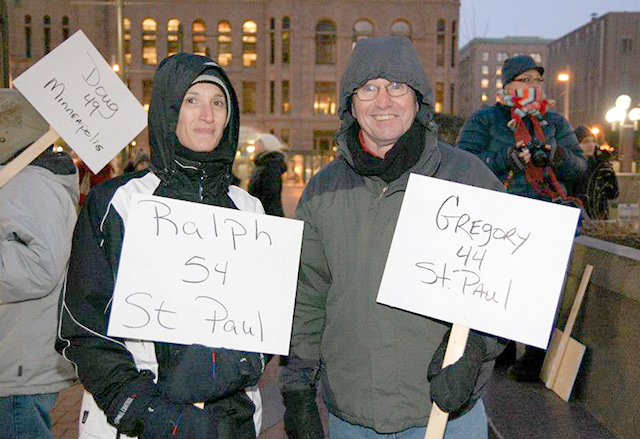 Bozeman recalled a friend of Dawson’s telling him:  “When I was having a bad time with my sobriety, Tony was there for me.’’

Rita McDonald, also in her 50s, will be remembered for her courtesy and her sense of humor, Bozeman said. She lived with her partner, Michael, for awhile staying in a trailer, but she’d visit Simpson to pick up her mail.

More than half – 72 – remembered this year had found a place to call home when they died, said Aja McCulloug Beers, communications manager for Simpson Housing Services. Causes of death included heart attack, untreated illness, exposure to the elements, complications of drug and alcohol use as well as suicide, accident and disease, she said. Some were struck by cars, others died in fires. What’s important to remember is that illness is more serious among the homeless because their lifestyle takes a physical toll, she said.