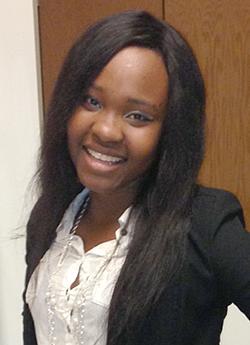 Burnett, a sophomore at Hamline University in St. Paul majoring in psychology and social justice, says she’s been able to make connections with children as a Page Education Foundation scholar, working at a St. Paul elementary school.

Burnett is a two-time recipient of the scholarship, a grant ranging from $1,000 to $2,500 given to a select few post-secondary students of color. Recipients are required to complete 50 hours of service-to-children volunteer work.

Burnett said getting to know students and seeing hard work pay off is one the rewards doing volunteer work as a Page scholar at Hamline Elementary School in St. Paul.

“The relationships that you’ve built, having them trust you and if they’re the ones who listen to you, you see their maturity level increase, you see them increasing in reading and writing and math,” she said. “Just having that connection where they can just come up to me and ask me a question.”

Amanda Moua, program manager of Page Education Foundation, said the foundation scholarship goal is to help students of color attain a college degree and to inspire “a giving-back-to-the-community mindset.”

“The idea of the foundation [is] that it’s really a pave-forward type concept,” Moua said. “The foundation helps you through college, and then we turn you to turn around and help a little kid get to college.

“When our Page scholars are done with college and get their degrees, we anticipate that giving back to the community is going to be something that they weren’t just doing … for their scholarship. It will be something [that is] a part of their life.”

The Page Education Foundation was founded in 1988 by Minnesota Supreme Court Associate Justice Alan Page, a former Minnesota Vikings star and a member of the NFL Hall of Fame. The foundation has provided 8,080 scholarships to 4,000 post-secondary students over the past 22 years.

Burnett was introduced to the program as a high school senior in 2012, when her school’s academic adviser encouraged her to apply.

“I was excited because I didn’t think I’d get in,” Burnett said, noting that there’s a lot of competition for the scholarships. According to the foundation’s website, the foundation received more than 1,200 applicants; 540 students were selected.

Burnett, the oldest of seven kids in her family, decided to volunteer at Hamline Elementary School and work with a teacher to manage a classroom of fifth-graders. Prior to her Hamline Elementary project, she worked with high school students with autism.

Burnett said the fifth-graders were timid when she first began working with the class. But as time passed and she interacted with the students, she began to see a change.

“After a week or two, they become really excited to see you,” she said. “They do their work because they know you and you’ve built a relationship.”

Still, she faced a few obstacles. She said there were times where she felt some students weren’t at the level they should have been and needed special attention. On the flip side, she said, there were students who didn’t listen because they “think they know everything.”

“Not every child is the same,” she said. “You have to work with each child differently to get the result that you’re looking for.”

Burnett has some advice for students considering applying for the scholarship: “Do it. The 50 hours go by quicker than you expect. Page [Foundation] has helped me a lot so, it will do them a great amount of justice if they do it.” May 1 is the application deadline for scholarships for the 2014-15 school year.

Burnett said she looks forward to working with kids in the future. “I love children, working with children, and helping children better themselves,” she said. “The journey never ends. You can start with one kid and another one comes in and you realize you’ve got to start all over again.”