University of Minnesota researchers ran some mortgage numbers, concluding redlining is so bad wealthy minorities are having a tougher time getting mortgages than poor whites.

The report, from the U Law School’s Institute on Metropolitan Opportunity (pdf),  asserts that, even after the economic recovery, Wells Fargo and other banks didn’t distribute mortgage loans proportionally in diverse areas — in particular, underserved north Minneapolis.

According to the report:

Although income is not the sole determinant of whether applicants obtain loans, it is hard to believe that credit profiles or economic factors other than income could justify differences of this magnitude between very-high-income black applicants and very-low-income white applicants. 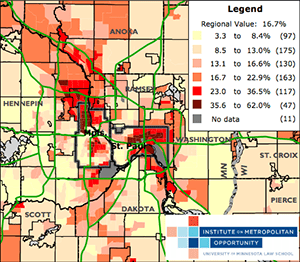 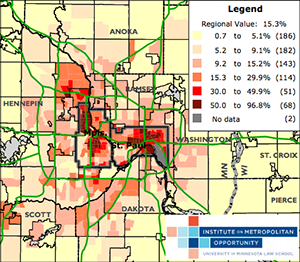 The bank responds that the study didn’t include government or FHA-back mortgages, leaning heavily on the report’s acknowledgement that non-racial factors play a part. (Wells Fargo’s full response is at story’s end.)

Not unexpectedly, the report has angered those who work with low-income Minnesotans.

“This report shows redlining is alive and well, and in some ways worse than it’s ever been. It’s not only immoral and unjust, but illegal,” said Anthony Newby, executive director of Neighborhoods Organizing for Change.

Steve Fletcher of Minnesota 2020 explains in a blog post that redlining is a term for when neighborhoods, rather than individuals, are evaluated on credit risk. Declining or risky neighborhoods, he says, tended to be predominantly nonwhite.

For multiple generations in our country, white families with the same household income have been given the opportunity to own property, earn equity, pass it on to their families, and build wealth over generations. Black families, on the other hand, have either been denied access to home loans or given subprime loans that are set up for failure. Even for black families that manage to get stable loans and build equity in their own home, the pattern of geographic discrimination against predominantly nonwhite neighborhoods leaves vacant homes and neglected properties that lower the property value for the whole neighborhood.

Fletcher asserts that biased institutions can say race wasn’t a turndown factor, while using location to produce the same effect.

The report, authored by Myron Orfield, outlines how mortgage evaluations should work:

Lenders … could ensure that loan origination rates are similar for households with similar economic profiles (regardless of race). They could also eliminate practices that currently lead to lower lending rates in diverse and majority-minority neighborhoods than would be expected given household incomes in those areas.

For instance, if the home purchase and refinance loan portfolios of the region’s banks simply reflected the regional distribution of homeowners and the actual mix of household incomes in each neighborhood, more than 13,300 additional loans would have been made in diverse and majority non-white neighborhoods over the four years from 2009 to 2012 (a 55 percent increase).

Some advocates for the poor believe lawsuits against the banks should be considered.

Rev. Kelly Chatman, pastor of Redeemer Lutheran Church in Minneapolis and member of ISAIAH’s clergy caucus, said in a statement:

“The racist practices of banks and mortgage lenders are unacceptable, and our faith calls us to respond. The Bible says, and I believe, that when one part suffers, every part suffers with it. The city needs to take action to end the suffering and make sure the banks repair the harm that has been done.”

First, we note that the loans included in the study exclude government or FHA-backed mortgages which represent approximately 20 percent of the loans made during the study period. In addition, the study does not address many key factors besides income that go into a credit decision, such as borrowers’ credit scores and how much debt they have.

Wells Fargo has always been a leader in fair and responsible lending, and lending in all communities is a focus for our company.  As a result,Wells Fargo is by far the largest mortgage lender in the Twin Cities; overall, in lending to borrowers representing all racial and ethnic groups, and in lending in diverse and minority communities.

• We are dedicated to helping our customers achieve their financial goals through homeownership and we remain committed to making credit accessible to consumers.

• In September 2012, we partnered with Minneapolis and St. Paul city leaders and local not-for-profit groups for NeighborhoodLIFT® , a unique program that provides down payment assistance, education, and access to potential homebuyers to purchase properties inside the city limits. The Twin Cities, our NeighborhoodLIFT commitment included $9 million for down payment assistance, locally designed programs to meet housing priorities, and local home buying education and support events. It also included a five-year mortgage lending goal of $1.9 billion.

In addition, the Minnesota Homeownership Center received a grant of $200,000 for the research study and to implement outreach programs to underserved communities. TPT/ECHO received a $390,000 grant for 2014 focus group analysis, educational programs and documentaries addressing the root causes of financial challenges and opportunities for cultural communities.

• We continue to support ongoing homebuyer education efforts; for example, on Saturday, April 4, we worked with the MN Homeownership Center to organize a homebuyer education workshop that was attended by 90 potential first-time homebuyers and featured presentations in English, Hmong and Spanish.