Escalating violence in the Mideast is prompting local demonstrations of solidarity with Palestinians as well as reactions from Minnesota lawmakers and a leader in state’s Jewish community.

Scores of demonstrators united Tuesday in grief and solidarity with Palestinians as they assembled outside U.S. Sen. Amy Klobuchar’s office in Minneapolis, demanding an end to the seething violence in the West Bank and Gaza Strip.

Picketers waved the red, black, green and white Palestinian flag and chanted “Free, free, Palestine,” marching along Washington Avenue toward downtown Minneapolis. They condemned the Israeli government after the July 2 abduction and murder of a Palestinian teenager, Muhammad Abukhdeir.

Among the crowd was Zakariya Abukhdeir, 20-year-old cousin of Muhammad, who said his cousin was — at the time of the incident — waiting for the morning prayers in front of a mosque near his East Jerusalem house.

“We were at a stage where we were beyond shocked,” said Zakariya, who wore a white T-shirt emblazoned with a photo of his late cousin and checkered scarves around his neck. “My mom and aunt were in tears when they heard about my cousin.”

Zakariya said his second cousin, Tariq, was also severely beaten by Israeli police amid protests over the killing of Muhammad, who was burned to death in a forest near Jerusalem. News reports say that Israeli officials are considering bringing criminal charges against a policeman who was alleged to have used “excessive force without any justification” after arresting Tariq, a Palestinian-American from Florida.

Israeli authorities arrested six suspects in the death of Muhammad, and some Israeli news outlets have linked the suspects to right-wing extremist groups in Israel. Officials in Israel say Muhammad’s killing was in revenge for the kidnapping and deaths of three Israeli teens. Their bodies were found buried in the West Bank and the deaths have ignited more fighting in the region.

Steve Hunegs, executive director of the Jewish Community Relations Council of Minnesota and the Dakotas, denounced the killings of the teenagers and prayed for peaceful coexistence in the region.

“We’re relieved to see that the suspects have been apprehended and the police did their work,” Hunegs said Muhammad’s killing. “There is no justification for this abhorrent attack. Hopefully, those responsible will soon be brought to justice.”

The June kidnapping and murder of the three Israeli teenagers — Naftali Fraenkel and Gilad Shaar, both 16, and Eyal Yifrach, 19 — and the apparent revenge killing of Muhammad has sparked an intense and growing clash between Israeli forces and angry Palestinians.

Israeli air and naval strikes against Palestinian targets have killed more than 80 people, many of them children, and injured 500 others, according to news reports.

Meredith Aby-Keirstead, spokesperson of the Anti-War Committee that organized Tuesday demonstration’s, condemned the Israeli government for the “atrocities” against Palestinians. 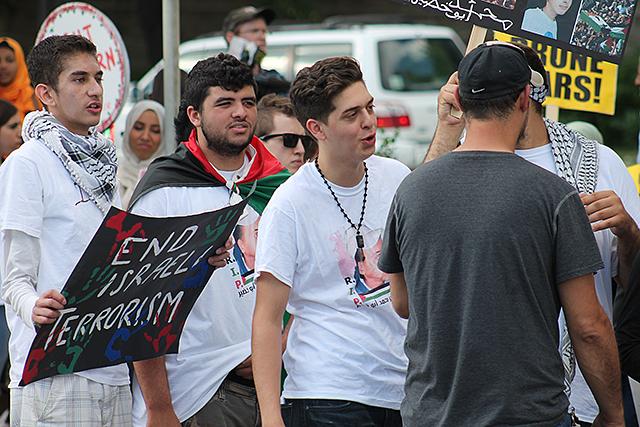 MinnPost photo by Ibrahim Hirsi
Demonstrators gathered outside Sen. Amy Klobuchar’s office in Minneapolis, demanding to put an end to the violence in the West Bank and Gaza Strip.

“We’re very concerned about the treatment of children,” Aby-Keirstead said in an interview. “We’re concerned about the use of collective punishment and settler violence. So we want this protest to send a loud message, particularly to members of Congress.”

“This is a tragedy that has already cost too many lives, including young Israeli and Palestinian teenagers,” Sen. Amy Klobuchar said in an e-mail to MinnPost. “The focus needs to be on stopping the violence so more innocent lives aren’t lost.”

The murder of the Israeli teenagers led to an Israeli military crackdown on Hamas members in the West Bank, which is controlled by Hamas. In return, Hamas responded with rockets.

“No country in the world would tolerate firing missiles into its territory,” Hunegs said of the Hamas rockets indiscriminately fired at Israeli civilian centers. “The government of Israel tried everything to prevent escalation of the situation.”

For Aby-Keirstead and the Anti-War Committee, which has been a voice for Palestinians since 2001, the Tuesday gathering wasn’t just an abstract solidarity protest.

“Both of those boys have family members here in Minneapolis,” she said. “So we thought it was particularly important to have a protest so we could be in solidarity with our brothers and sisters in Palestine. This is a protest with the actual family.”

Demonstrators marched with Zakariya, born and raised in Minneapolis, and members of his family, who traveled from other states to take part in the demonstration. Among them was Rawan Abukhdeir of Virginia.

“It’s very tragic,” Rawan said of the death of Muhammad, whom she last met in Jerusalem in 2010. “What happened to him is unfair. No mother should go through that.”

Hunegs said that he noted a difference in the response to the kidnapping and killing of the Israeli and Palestinian teenagers: “That is in Hamas circles, they were celebrated. In Israel, people from all walks of life visited the home of the mourning Palestinian family and are condemning the murders.”

Israel remains the United States’ closest ally in the Middle East and receives about $3 billion in U.S. aid each year. U.S. officials have called on Israel and Hamas — which the United States and the European Union have designated as a terrorist organization — to de-escalate the violence.

Sen. Al Franken said in an e-mail to MinnPost: “First of all, my thoughts are with all the families of the teenagers who were murdered. Those were absolutely abhorrent acts, and their perpetrators should be brought to justice and punished. It is also my hope that the tension and violence between Israel and the Palestinians can be de-escalated as soon as possible to prevent further loss of life.”

Rep. Keith Ellison said in a statement: “A ceasefire must be followed by intense diplomatic outreach to restart negotiations on a peaceful settlement between the two parties. Until an agreement can be reached, both Israelis and Palestinians must not give in to vengeance. We are united by far more than divides us.”

The Anti-War Committee is leading another protest Friday at 4:30-5:30 p.m. on Snelling and Summit Avenues in St. Paul.