A group of Muslims in Minnesota is using art to fight misconceptions about Muslim-Americans and to punctuate positive contributions of the state’s Muslim community.

The Islamic Resource Group (IRG), which provides educational training about Islam and Muslim Americans, created “Tracks in the Snow: The Minnesota Muslim Experience since 1880,” a traveling exhibit showcasing the history and diversity of Minnesota Muslims.

The Walker Art Center is now showing the free exhibit, which features 25 portraits and stories of Minnesota Muslims from diverse cultures and ethnic backgrounds: African-American, Hispanic-American, Palestinian-American, Japanese-American, Indian-American, Afghan-American, Somali-American and others.

A reception was held Saturday at the center to mark the opening of the show, which will be on display through Aug. 8.

Addressing a crowd of about 60 people at the reception, Jean Nackers, a member of the IRG, said: “The traveling exhibit is designed to expose Minnesotans to the untold narratives of Minnesota Muslims, a deep-rooted and growing part of the state’s community. Contrary to popular belief, Minnesota Muslims come from diverse cultural and ethnic backgrounds like the broader Muslim-American population.”

She added: “This exhibit provides a unique perspective about a community that is little known and widely misunderstood due to popular misinformation and misconceptions.”

The Walker Art Center is featuring 25 portraits, but the entire art project contains 40 portraits and stories that can be found at IRG’s website and are available in books and DVDs.

The exhibition was also displayed at the Minneapolis Institute of Arts and the state Capitol earlier this year. 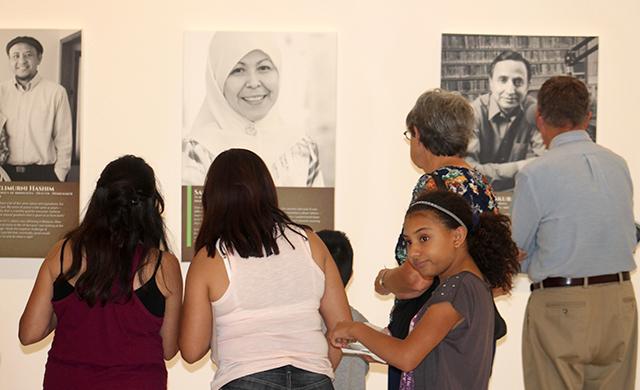 MinnPost photo by Ibrahim Hirsi
A reception was held Saturday at the Walker Art Center to mark the official opening of “Tracks in the Snow.”

Abdulwahid Qalinle, Somali-born and an adjunct Islamic law professor at the University of Minnesota, arrived in the United States about 15 years ago.

During his first years in Minnesota, Qalinle served as an eligibility officer in the state Department of Human Services. While working there, Qalinle attended the U of M’s law school, graduating in 2004.

Qalinle has been teaching Islamic law since 2004. Addressing his experience with the Muslim community and their attitudes toward U.S. law, he told the Muslim Experience in Minnesota project:

Muslims who are here are subject to the American law. We came here, for instance in my story, as a willing and grateful refugee who is, who understands and is grateful for the opportunities provided by this great country. And I am committed to upholding and abiding the laws of this country. And I have been doing that so far. And I am committed to that, and for me the laws of the United States and the constitution of the United States is the law that I chose to live under. And so are all the Muslims who are here.

Tamim Saidi, an Afghani-born pharmacist, spent his teenage years in Afghanistan and Pakistan. He arrived in the United States in 1990 and has lived in Minnesota ever since.

US Bank Vice President Ziad Amra is a Palestinian-American who was born in Shakopee and raised in Chaska. He attended William Mitchell College of Law in St. Paul and later earned an MBA from the University of Minnesota.

Amra has been working for the bank more than a decade. Speaking of the challenges that Muslims face in the United States, Amra told the Muslim Experience in Minnesota project:

Side notes explaining basic facts about Islam and Muslims accompany the exhibit: Islam is the religion. Muslims are the followers of Islam. “Allah” is an Arabic word for “God.” “Muslims also believe in the messengers of God including Adam, Noah, Abraham, Jesus and Muhammad.”

The world’s Muslim population is 1.6 billion, making Islam the second-largest religion after Christianity, according to a report by the Pew Research.

Muslims make up 150,000 of Minnesota’s more than 5 million people. About 18 percent of the state’s Muslims are immigrants; 17 percent are multi-generational, 45 percent are first generation Americans and 4 percent are Arabs.

The Minnesota Muslim Experience project was funded in part by the Minnesota Historical Society.