Minneapolis’ love for cycling has in recent years drawn national attention — and those who closely watch biking activities across the country have proclaimed the city one of the best for biking in the country.

After all, the city’s streets have been transformed recently, with 92 miles of on-street bikeways and 85 miles of off-street bike lanes carpeting the city.

Despite these changes, Anthony Taylor noted his African-American community isn’t part of a swelling number of the city’s cyclists, which has increased from 1.9 percent in 2000 to 4.1 percent, according to a recent U.S. Census report.

“There has been a dramatic increase [in cycling] in recent years,” Taylor said. “But what we believe is that the African-American community’s participation has not grown.”

Now Major Taylor Bicycling Club of Minnesota, part of a national nonprofit organization Taylor co-founded 15 years ago, is working to increase biking participation for African-Americans in the Twin Cities.

He added: “African-American communities have also experienced disparities relative to economics and safety. And so, we really see that the bicycle is a vehicle for impacting all of those issues. We believe that it will impact the health disparities, the economic disparities and lifestyle disparities.”

Major Taylor Bicycling is named after Major Taylor (no relation to Anthony Taylor), who became the first African-American world champion in cycling in the late 1800s. The organization engages in a series of rides that target underrepresented communities and organizes regular biking activities in Minneapolis and St. Paul.

Over the past three years, the organization has donated 300 bikes to children and adults who couldn’t afford to purchase them.

Louis Moore, Major Taylor Bicycling co-founder and an avid cyclist, said the group is partly accomplishing its goal to get people to use bikes as a means of transportation.

“We want people to see us bike in the community on a regular basis,” said Moore, who has been biking for 50 years. “Over a period of time, we’ve accomplished some of that.”

Moore added that maintaining bicyclists on the roads remains a challenge for the organization. “A lot of people have come and gone over the years,” he said. “I think that has a lot to do with their lifestyle, their schedules, their work.” 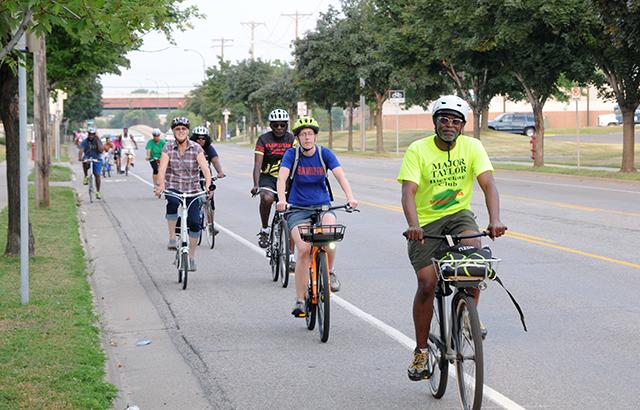 Walter Griffin, who has been a club member for 15 years, has been working to expose people to biking for health and for peace of mind.

“My interest is just making sure that more people in the community realize that the more they bike, the better their health will become,” he said.

Taylor said the ride was meant to commemorate the Underground Railroad — a 19th-century network that helped slaves escape to free states and Canada — as well as to call attention to the significance of the black community’s fight to attain freedom and dignity.

The event also taught participants, who included blacks and whites, lessons about the sometimes-overlooked ugly moments of Twin City’s history, including what happened at a wooden, white house that stands at 46th and Columbus in south Minneapolis.

When Arthur and Edith Lee bought the house in 1931, angry mobs surrounded the house, intimidating and forcing the black couple and their 6-year-old daughter to move from the all-white neighborhood.

“We try to focus on sites that people probably see all the time, but really don’t know they have significance,” said Taylor. “Most people don’t think that the Twin Cities has a legacy of that kind of issues.”

Taylor said the club isn’t limited to recruiting only black cyclists. “We’ve a mixed group of cyclists. We’re doing this to promote dialogue between communities that would not normally speak.”