On a recent Saturday afternoon, Tibetan immigrant Ngawang Dakpa towered above the center of his small arts-and-gifts shop in Minneapolis’ Midtown Global Market, acknowledging his customers’ presence with a nod and a soft smile.

Dakpa is among 5,700 immigrants who own small businesses in the Twin Cities area, as documented in a recent study conducted by the New York City-based researchers at Fiscal Policy Institute, which partnered with the Americas Society/Council of the Americas group.

The Twin Cities, Philadelphia and Nashville served as case studies for the report, which punctuates the role immigrant businesses have played in the economic growth in neighborhoods that have seen decades of population decline.

In Minneapolis and other cities, “these businesses helped re-establish a commercial base for neighborhoods that were in disrepair, giving them new character and a critical economic boost,” states the report.

In 1950 for instance, Minneapolis housed a total population of 519,000, according to the report. By 1990, that number had plummeted by nearly 30 percent — 368,000. But the flow of immigrants and refugees from Africa, Asia and Latin America over the past two decades has helped boost the city’s population to more than 400,000.

The Twin Cities metro area has been transformed in recent decades due to the refugee resettlement program, which permits refugees escaping war and persecution in their native counties to make a home in the United States.

A 2013 Minnesota Department of Health record, the most recent data available, shows that more than 2,000 refugees resettled in Minnesota that year, with the largest number coming from Somalia and Iraq.

Midtown Global Market now sits along Lake Street and Chicago Avenue in south Minneapolis. In the 1990s, however, this area was a magnet for crime and prostitution.

Before Midtown Global Market became what it is, in 2006, it was a retail and distribution center for Sears Roebuck and Company. In 1994, the center was closed, and the 1.2-million-square-foot property “had become a dangerous island of urban decay,” according to the report.

“It was not an area most Twin City residents wanted to visit, and its presence cast a pall on the surrounding neighborhood along Lake Street, one of the most ethnically and racially diverse in the city,” the report states. 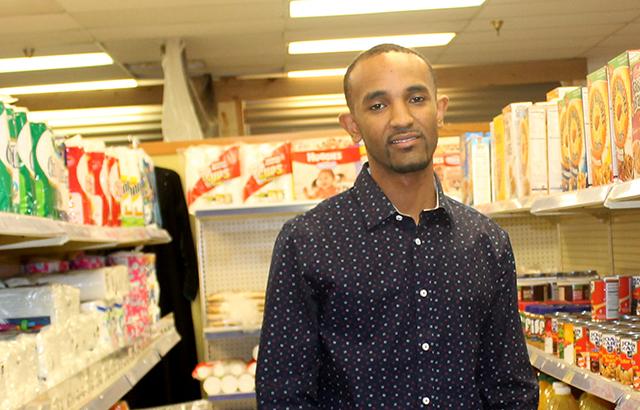 MinnPost photo by Ibrahim Hirsi
Mubarek Lolo, owner and operator at Awash Market on in St. Paul, arrived in the U.S. in 1994, when he was 10.

Today the global market has some 40 stores and stands — and remains a vibrant commercial landmark and a destination for those with an eye for ethnically and culturally diverse foods, arts and crafts.

“We work with people who don’t have access to other classes and programs,” Becky George, Midtown Global Market Program Manager, states in the report. “We have classes in Oromo, English, Spanish, Hmong, Somali, and maybe Farsi.”

The report adds: “The Neighborhood Development Center also has a loan program, providing start-up capital or enabling business owners to invest in a new refrigerator or a new product idea, with an average loan of $16,000.”

‘We take the risk to establish businesses’

The report was no shock Dakpa, the Tibet Arts & Gifts owner: “I’m not surprised that immigrants are doing well in small businesses. We take the risk to establish businesses and to contribute to the local economy.”

Mubarek Lolo, owner and operator at Awash Market on St. Paul’s University Avenue, is an immigrant from Ethiopia, who arrived in the U.S. in 1994. He was 10 years old.

And within Awash Market, which was opened last year, he’s subleased spaces for other entrepreneurs: A space for mobile serves, a space for an Islamic bookstore and another for Muslim women’s traditional attire.

“We have this business drive,” Lolo said of the immigrant communities. “We’re hiring, we’re providing economic opportunities to communities and we’re contributing in the society that we live in — and we feel like we’re part of it.”