“Criminal law is a very rich area of law,” she told the crowd. “And it’s one of the areas that has grasped the imagination of the public because there are so many [TV] shows that happen.”

Sheikh-Salah — who underlined that she was not speaking on behalf of the Hennepin County Attorney’s office — added that stories in the popular crime shows such as “Law & Order” and “CSI” don’t necessarily translate into the realities of real-world happenings. “That’s not how it works in real life,” she said of the shows.

Even though the gathering was the association’s first meet-and-greet event, it presented some important lessons for many in attendance: Sheikh-Salah, a founding member of NASBA, explained what it means to have a justice system, a constitution and the many parallel branches of the justice system, among other things.

For the majority of the people in attendance, learning about how justice is carried out in the U.S. was important because the civil war that unfolded in Somalia more than two decades ago has left the country without a formal justice system.

She explained: “This system rests on the clan structure of Somali society, in which a community is composed of a hierarchy of units. The smallest of these units is the diya group, an extended family group collectively liable for the payment of compensation monies in case of death or injury, whether intentional or accidental.”

This traditional system of justice has long existed in Somalia, even before the civil war, which erupted in 1991, uprooting hundreds of thousands of people, many of whom ended up in Minnesota.

Somali legal professionals hint that elders sometimes get involved in minor criminal cases before or after they’re reported to law enforcement.

Sheikh-Salah shared with the crowd a case about a local Somali woman robbed by a Somali man in 2004. The woman gave the police a report statement with the name of the suspect.

When the police submitted the report and prosecutors charged the case, the woman recognized that the man was related to her. Eventually, Somali elders got involved as mediators.

Before the man had his day in court, the woman called the prosecutor, saying that she was mistaken and that the man wasn’t the suspect.

“They give her a warning: ‘Are you sure? Because you gave a report statement to the police,’” Sheikh-Salah said.

Sheikh-Salah said the woman was charged with falsifying a police report although she didn’t do it intentionally.

Abdinasir Abdulahi, a founding member of NASBA and Minneapolis-based attorney, said the association was established to contribute to the community and to become a network base for Somali legal professionals throughout North America. Mentor program seeks to help law students

“We’re getting questions about what it’s like to go to law school,” Abdulahi said in an interview. “We felt that we had to [create] an association that can cater to the community, educate, inspire and mentor the youth.”

Through the NASBA mentorship program, Abdulahi took Abdifatah Mohamed, a law student at William Mitchell College of Law, under his wing.

Mohamed worked with Abdulahi about two days a week. “I gained lots of experience and lots of a valuable insight about practicing law and about running a small business,” said Mohamed, who moved to Minnesota two and a half years ago from Seattle, Washington for law school. 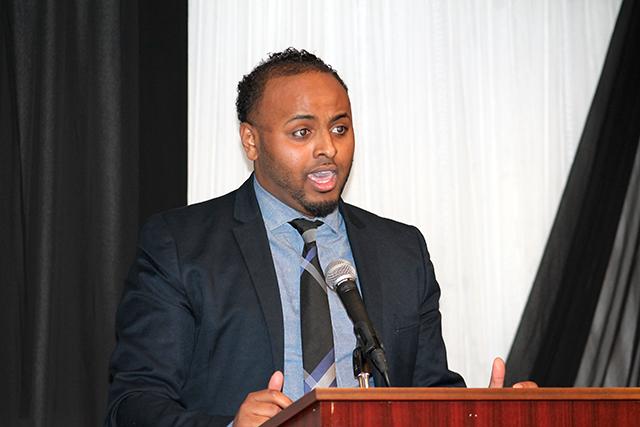 MinnPost photo by Ibrahim Hirsi
Abdifatah Mohamed: “NASBA has a goal of reaching out to the community and doing public service.”

He added: “Abdinasir has been a valuable mentor to me. I can’t think him enough.” NASBA has a goal of reaching out to the community and doing public service, Mohamed said.

Last week, that service included about a dozen legal professionals assembled in a panel to help the audience understand the seemingly complex U.S. justice system.

The audience even received a brief introduction to the U.S. Constitution: “This document is the oldest and shortest constitution in the world,” Sheikh-Salah said as she held the constitution high.

She continued: “And as a matter of fact, I’m going to add, the most contemporary document. It has 7 articles, 27 amendments, 4,400 words. The United States constitution gives rights to individuals. And the presumption of innocence preserves the dignity of the individual. You’re not guilty, until proven guilty.”