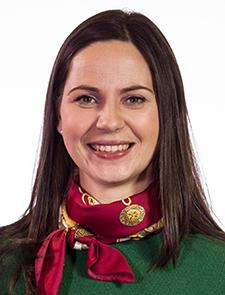 Tea Rozman Clark, a Slovenian immigrant, has an ambitious dream: She wants to establish the largest video library in the country of personal narratives from America’s diverse immigrant population — with the goal of fostering greater understanding between the country’s immigrant and nonimmigrant communities.

Nearly two years ago, Rozman Clark co-founded Minneapolis-based non-profit Green Card Voices, which documents the triumphs and trials of immigrants throughout the United States, translating them into exhibits and curriculum for Minnesotans to learn about their neighbors.

GCV has so far recorded the stories of 109 first-generation immigrants from 60 different counties, including the Philippines, Jamaica, Kenya and Puerto Rico. These stories were recorded in Minneapolis, New York City and San Francisco.

Recently named one of the 23 2015 Bush Fellows for her GCV digital storytelling work, Rozman Clark was recognized for “her remarkable ability to build bridges of understanding between immigrants and nonimmigrants.”

Rozman Clark, who’s also the executive director of GCV, explained the significance of capturing the stories of immigrants nationwide: “If you really want to understand American immigrants, you also have to hear some stories in other states. [For example], it’s very different to be an immigrant in New York than to be an immigrant here.”

An immigrant in Eau Claire

Rozman Clark’s journey to combat stereotypes and her passion to empower immigrants began more than two decades ago when she was a teenager in Ljubljana, the capital of her native Slovenia. When a military conflict erupted in Yugoslavia in the early 1990s, hundreds of thousands of refugees fled to Slovenia, turning the more than 50 buildings abandoned by the Yugoslavian military into camps.

“That’s when I started volunteering in the camps,” said Rozman Clark, 38. “That was the main reason why I also decided to study social work as my first degree. I spent more time in the refugee camp than I was actually in school.”

She was working for Zavod Voluntariat as a volunteer coordinator, mainly working with youth and women. “I saw a grave violation of human rights that happened to these people. In that process, I learned how lucky my family was in Slovenia and that the [refugees] I was meeting were completely normal people, very much like me and my family.”

In 1997, Rozman Clark won a prestigious Open Society Foundation scholarship to study for a year at the University of Wisconsin-Eau Claire for a year, where she understood what it meant to be an immigrant.

“I didn’t speak English well,” she said. “I had strong accent.” Most of the people Rozman Clark met on campus didn’t know much about her native country. So they asked her more questions about the war in the region, though she hadn’t really lived that experience. Slovenia had only a brief military conflict, which lasted for 10 days — with 63 people dead.

“People were inviting me to speak at events,” she said of her time at the school. “But all of the questions were about war. I realized that people didn’t know much about the world. There wasn’t just a good understanding of the region.”

A year later, Rozman Clark returned to Slovenia to complete her undergraduate education there — though she had left something behind in Eau Claire: Her future husband, Nathan Clark.

Clark joined her a year later in Slovenia, and for the next several years, the couple traveled around the world, including West Africa, volunteering at schools.

In 2001, the couple got married in Slovenia. In the same year, they moved to attend graduate school at the University of New York, where Rozman Clark completed her master’s degree in Middle East studies.

Five years later, the couple returned to Slovenia again, and Rozman Clark went back to school to pursue a Ph.D. in cultural history with a specialty in oral history. In Slovenia, she also gave birth to two daughters, Izabela and Sofia.

In 2012, Rozman Clark finally moved with her family to Minneapolis. As the founding executive director of GCV — which is housed at the Intermedia Arts in Uptown — Rozman Clark employs the lessons she learned from living in the U.S. as an immigrant to empower other immigrants through storytelling.

The stories immigrants are used to educate nonimmigrants, she said, but the process also inspires and empowers immigrant youth.

So far, the GCV has hosted seven exhibits: in the Twin Cities, Robbinsdale, Oakdale and Mahtomedi. The project has featured, among other professions, educators, entrepreneurs, doctors, and artists — from Israel, Iran, Russia, Cuba and other countries.

“We need all of those stories to really reflect what immigrants do,” said Rozman Clark, “to better understand who immigrants really are.”