Last month’s appointment of the first Somali-American, Ibrahim Mohamed, to the Metropolitan Airports Commission has attracted volumes of plaudits and media attention across Minnesota — and other parts of the world.

But on Tuesday night, it brought Gov. Mark Dayton, local officials and community leaders to Minneapolis’ Brian Coyle Center, where more than 80 people assembled to celebrate and honor the historic appointment of the commissioner, who drives a cart at the Minneapolis-St. Paul International Airport for minimum wage.

Appointed in February by Dayton, Mohamed joined 13 other commissioners who operate the Minneapolis-St. Paul Airport and six smaller airports in the metro area. Dayton said he appointed Mohamed because his employment experience at the airport can be a voice for hundreds of other airport workers in the decision-making process.

“I made appointments to the Metropolitan Airports Commission previously — and this is overdue,” Dayton told the crowd, speaking about Mohamed’s appointment. “It was overdue before I arrived, and it’s overdue now that I’m in my fifth year as governor. I regret that, apologize for that.”

Overdue or not, Mohamed’s face beamed with excitement as he expressed his appreciation to the governor for the appointment during a short speech before the crowd.

After escaping the Somali civil war in 1991, Mohamed lived in Kenya as a refugee for more than a decade, longing for a better place with opportunities to work and to pursue his dreams.

“As many immigrants, I came here to change my life and get a better life,” Mohamed said. “Now I am a cart driver, which I am happy to be because I am helping a lot of people who need my help, like elderly people and disabled persons. I work five days, and every day I help more than 80 passengers.”

In 2004, Mohamed settled in the Twin Cities and immediately secured a job at the Minneapolis-St. Paul Airport. Over the years, Mohamed worked as an aircraft cleaner, a baggage runner and a ticket verifier.

As a full-time electric cart driver now, the 35-year-old Rosemount father of five earns $ 8 an hour — with no health benefits.

Mohamed and his colleagues have been advocating for improved working conditions for the hundreds of airport employees, many of them immigrants from Somalia and Ethiopia.

When Mohamed’s friends learned about the opening on the Metropolitan Airports Commission — the body that governs operations at MPS — they encouraged him to apply so he could represent their interests.

As a commissioner, Mohamed said he will continue advocating for better working conditions for airport employees and for increased wages.

“It’s very hard to raise kids or family with the minimum wage,” Mohamed said. “That’s why I’m standing up to represent the airport workers and my community.”

The governor promised to stand by Mohamed in his efforts for a better wage for airport workers. “I will redouble my efforts and do whatever I can to support your efforts and the board of the airport commission to improve your working conditions, improve the wages,” he said. 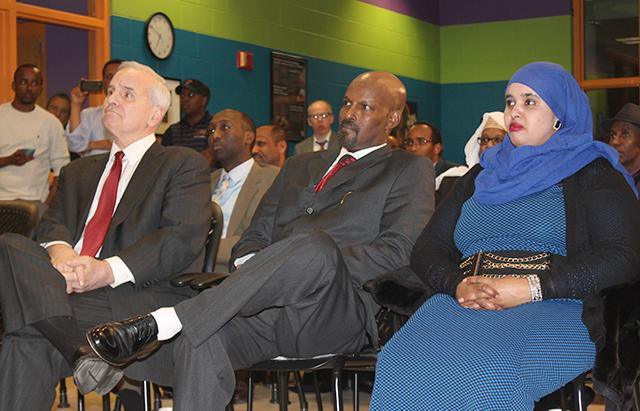 Airport workers like Mohamed have indirectly “been treated badly” by the commission, Dayton later said in an interview. This is because the commissioners provide authorization to private companies that operate at the airport to pay their workers less.

“The airport couldn’t function without the hard work of commissioner Mohamed and his co-workers — and they deserve to be recognized,” Dayton said. “The fact that he was making $12.50 an hour a few years ago, according to reports, and they reduced that to minimum wage is just disgraceful.”

Mohamed, whose term ends in 2019, said he brings a unique perspective to the Commission, since the majority of commissioners come from white-collar backgrounds.

“We applaud Governor Dayton for insisting that a worker be represented on the MAC, and appointing a great candidate like Ibrahim Mohamed,” said Local 26 President Javier Morillo in a statement. “I am excited to see Ibrahim continue the work he has always done fighting to make the MSP airport the best airport it can be for both employees and passengers.”