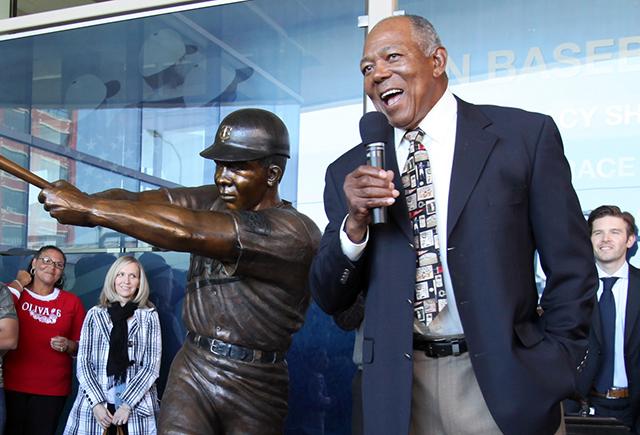 REUTERS/Eric Miller
Oliva speaking after the unveiling of a statue in his likeness at Target Field in 2011.

Any baseball fan who was around in the ‘60s would probably remember Tony Oliva, the admired former Minnesota Twins right fielder, three-time batting champion and eight-time All-Star.

Oliva, an immigrant from Cuba, spoke to scores of people during a recent Green Card Voices dinner in Minneapolis about his journey to Minnesota and how the U.S. is an open field for those willing to turn their dreams into reality, whatever the color of their skin.

“In this country, you have a chance to achieve your dream,” he told the crowd. “My dream was to play baseball. I wasn’t able to play [in major leagues] in Cuba, but I was able to play in the United States.”

Like Oliva, millions of black immigrants are finding their way to the United States in pursuit of success and a better life. And according to an April Pew Research Center report, a recent stream of immigrants from the Caribbean and African countries has swollen and reshaped the general population of the nation’s black communities.

The majority of black immigrants arriving from Africa come from Sub-Saharan African countries — with only 1 percent of black foreign-born immigrants coming from North Africa. Nigeria and Ethiopia have the largest population among African immigrants in the nation.

The study, “A Rising Share of the U.S. Black Population Is Foreign Born,” also compares the black U.S.-born population with black immigrants, revealing some socioeconomic, educational and age differences:

The study adds: Despite their higher level of education and higher income, black immigrants are less likely to purchase homes, compared with all Americans.

Oliva, the former Twins star, who arrived in the U.S. in 1961, told the crowd at the April 18 fundraiser that he has been to various countries in the world, but has never laid eyes on a country more receptive than the U.S. “Nobody does what Americans do for people,” he said. “Nobody.”

He continued: “Thank you to the United States of America for that because we can get a chance to work and achieve the dream.”