Levy-Pounds also serves as the chair of the Minnesota State Advisory Committee to the U.S. Commission on Civil Rights, and she is a co-chair of Everybody In, a group working to improve employment opportunities for communities of color.

She’s also a visible member in the Black Lives Matter Minneapolis movement, which raises awareness of issues that affect African-Americans. “I’m a woman of faith, and I do this work because of my faith,” Levy-Pounds told the crowd. “God is the one who empowers me to come back to the frontlines again and again, even when I want to give up.”

She added: “And he sends people like you all to encourage me and others, who are standing on the frontlines fighting for justice — and that makes all the difference.”

Dominguez, an organizer with Centro de Trabajadores Unidos en la Lucha (Center for Workers United in the Struggle), educates Twin Cities Latino workers about their rights and responsibilities in the workforce.

Before joining CTUL, Dominguez worked as a cleaner at many stores and restaurants. After many years of moving from one job to another, Dominguez decided to find a way to change employment policies instead of changing jobs. So in 2014, she joined CTUL as an organizer serving low-income Latino workers. 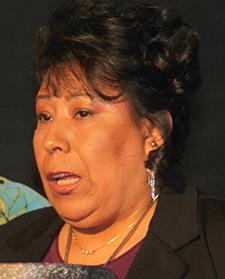 As award recipients, Levy-Pounds and Dominguez will each receive $10,000 from the Saint Paul Foundation to fund their mission to end racial disparity in their communities.

“Achieving racial equity is one of the most critical challenges and biggest opportunities facing Minnesota communities,” said Carleen Rhodes, president and CEO of The Saint Paul Foundation. “We are committed to this cause and honored to celebrate the dedication and often unrecognized efforts of individuals fighting to end racial disparities.”

Four other leaders also received accolades for their work to end racial injustice: Russel and Sarah Balenger, co-founders of the Circle of Peace movement; Delores Henderson, principal at Hazel Park Preparatory Academy in St. Paul; and Chaun Webster, curator of literature at Ancestry Books and director of Free Poet’s Press.

Author, activist and artist damali ayo was the featured keynote speaker at the event, which also brought over half a dozen state and local leaders to the event that took place at Crowne Plaza.