Lori Greene was waiting outside when a van carrying four African-American teenagers slowly rolled into the parking lot of her Mosaics On A Stick shop Saturday.

She led them to a brick wall across from her arts-and-crafts shop on the corner of Snelling and Lafond avenues in St. Paul. There, Greene and her team put on gloves as they looked up at a mural displayed on the wall, which shows stars shooting down and a person extending hands to uplift another.

“Lift as We Climb,” they named the piece.

Greene and the teens then dipped their hands in containers filled with a sand and cement mixture and smeared it over the small pieces of tile that made up the mural. Then, they cleaned it with newspaper, leaving the mixture to stick in between the joints.

“This process is called grouting,” she explained. “It will make the piece solid. It’s a messy, dirty process.”

It was an enjoyable one for the teens, though, who are serving time at the Boys Totem Town, a juvenile detention facility in St. Paul. For about seven weeks now, they’ve worked on the piece, which was funded by the Minnesota State Arts Board.

“I wanted to get out of the jail for a minute, come out here and do something nice for the community,” said one of the teens. “It’s a fun project. Doing something to help people for free is always fun.”

Another teen, a junior at the Face to Face Academy in St. Paul, said he chose to participate in the project for similar reasons. “I want to help out the community and put a smile on people’s faces,” he said.

Greene partnered with Boys Totem Town to create the project as a way of helping the juveniles get back on their feet when they’re released. “We all have the possibility of change,” she said. “Our responsibility as human beings is that we should take care of everybody. Everybody has something to contribute.”

Greene’s “Lift as We Climb” isn’t the only mural displayed in the city’s Midway neighborhood. Three other local artists — Greta McLain, Eric Mattheis and Yuya Negishi — are also working in the area with the community to create separate murals.

The artworks are funded through the Midway Murals project, aimed at transforming the area into an “outdoor museum” in collaboration with immigrant business owners in the neighborhood. The project gathers artists, communities and businesses around “starting anew,” a theme that refers to the changing faces of the neighborhood and the experiences of its diverse immigrant communities.

“The murals will reflect the changes in culture, residents, infrastructure and imagination that are forever occurring in the city,” states the project’s mission, “as well as the promise and struggles that the community navigates over time.” 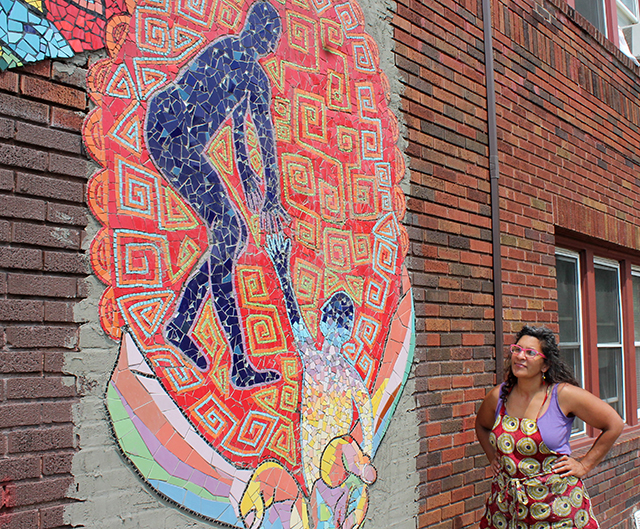 MinnPost photo by Ibrahim Hirsi
Mosaic artist Lori Greene: “I felt really important to make images that represent my culture and myself since we don’t see that.”

An African-American and a St. Paul native, Greene has spent nearly 20 years working as a mosaic artist and creating images of the memories and strengths of communities of color.

“I felt really important to make images that represent my culture and myself since we don’t see that,” she said. “And especially, we need to have it out in the world, not just in museums.”

As part of the Midway Murals project, Greene is working on another piece just two blocks away from her craft shop. “Art always changes the neighborhood,” she said. “It changes the community.”

‘Everybody has something to contribute’: Artist partners with Boys Totem Town for mural project