The financial pressures in Yvonne Johnson’s life are often exacerbated in the final week of each month, when her bank account begins to dry up.

“After I pay for rent and all the bills, I’m left with less than $100 by the end of the month,” she said. “That doesn’t cover everything.”

A year ago, however, when Johnson spotted people in a long queue for free produce near the River of Hope Lutheran Church in north Minneapolis, she breathed a sigh of relief.

Johnson learned that Loaves and Fishes — nonprofit meal program helping those facing hunger in Minnesota — distributes weekly free fruits and vegetables to people like her who don’t have the means to access fresh and healthy food.

Established 33 years ago, Loaves and Fishes also provides year-round dinner at 24 sites throughout the Twin Cities and its surrounding suburbs Monday through Friday. Last year alone, the organization served over 400,000 nutritious meals for poor Minnesotans. Each month, Loaves and Fishes gives away 25,000 to 30,000 meals to hungry Minnesotans.

Summer is busiest time of year

But summer is the busiest season of the year. “A lot of children who go to school during the school year have free and reduced lunch,” said Miah Ulysse, a meal planner at Loaves and Fishes. “If they are not in school, during the summer time, they don’t have that nutritionally complete meal to fill them up during the day.

“So what we do is that we opened up different sites around the areas that target children and provide them with a nutritionally complete meal that gives them certain required amount of protein, grains and breads, fruits and veggies.”

Through its Produce Distributions program, the organization gives away dozens of food pallets to hundreds of people in the Twin Cities each week throughout the summer.

“Today I got some bagels, grapes, oranges, onions, some spinach and some strawberries,” said Johnson, who was at the north Minneapolis site on a recent Wednesday afternoon. “They even gave away some sandwiches this time and some mushrooms.”

She added: “A lot of people don’t get a chance to get produce because it’s expensive. For me, with all these free fruits and veggies, I’ve less stuff I have to purchase with cash — and it definitely helps. It really does.”

This year’s program began its operations in June, and it’s scheduled to end in August. In June, the program served at the north Minneapolis site every Wednesday. But during the rest of the summer, distributions will be split every other Wednesday between the organization’s St. Paul and Minneapolis branches. 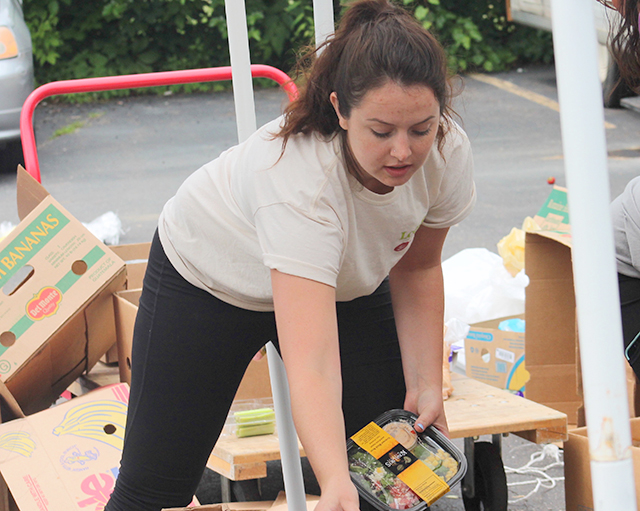 ‘I wait for this day’

Last Wednesday, Dottie Latawiet was one of nearly 100 people who walked away from the north Minneapolis site with fruits, veggies and bread.

Latawiet, who cares for seven grandchildren, doesn’t work because she has a heart condition. But she comes to the site to get her grandchildren what they like most: peanut butter and jelly.

“I wait for this day,” she said. “Last Wednesday, we were limited to only one loaf of bread. So, when you get a lot of grandkids, one loaf is not enough. But thanks to the lord, we’re getting three loaves today. I couldn’t afford to buy these.”

“Communities [in north Minneapolis] have been thought of as dangerous and gangbanging,” she said. “[But] that’s not the case for everybody. People want fresh food and veggies. They want to eat healthy. And you can just tell from the produce drop here. People want these things.”

North Minneapolis communities are thriving, despite the disparaging images in the news, Ulysse said. Kids and their parents come to the site, appreciative and with big smiles. “It’s just rewarding to be able to build community,” Ulysse said. “To see different people from different cultures and being able to service them.”