Sofia Hersi broke out into a smile.

A pair of customers entered her small clothing store in the Karmel Square mall in Minneapolis last week, and Hersi rose from her stool to walk up to the two young Muslim women, who were shopping for the weekend Eid al-Fitr festival, which marks the end of the Muslim holy month of Ramadan.

Hersi welcomed the shoppers as they caught glimpses of an abaya — a loose, robe-like dress — hanging from the wall without a price tag.

“Where did you buy this from,” one customer asked, “and how much is it?”

Hersi, 27, opened her shop, Modern Closet, in partnership with her friend Istar Mohamed in April. Their aim was to cater to young Muslim women who had a taste for the traditional  — and for stylish clothing.

The store sells various items, including traditional dresses, scarves, handbags, clutches, sunglasses, rings and necklaces — some of them imported from the Middle East and others from New York and Los Angeles.

Older women have tended to dominate the female clothing market in the Twin Cities Somali community, Hersi explained. But in recent years, the industry has seen an increase in a new generation of entrepreneurs, who have joined the field to bring new, more stylish design ideas to young Muslim women.

Prior to opening Modern Closet, Hersi was a regular customer at Karmel Square. But she often came and went without buying anything, unsatisfied with what was around. “When I tried to find clothes in these stores, it was tough because most businesses were owned by older women like your mom and grandma,” she explained. “They were having a hard time finding what young women wanted.”

“Modern Closet is here to fill that void,” she said. “We want to be fashionable, we want to represent our culture and we want to show our identity as Somali Muslim women — but also, we want to look good.”

Said Bruce in an interview: “Women play a big role in the national economics, too. So it’s not surprising that they’re playing a big role here.”

Before she opened the shop, Hersi found it inconvenient to go to the Mall of America or Southdale, and then to a Somali mall, just to shop for one wedding event. In the American malls, she bought accessories and other things. In the Somali mall, she bought traditional dresses.

“In the American stores, it’s hard to find the kind of dress that Muslim women would want to buy,” Hersi said. “You want to be fashionable, [but] you want to be modest and covered up.”

She added: “So what we did was that we merged the two together. We brought the fashion with the traditional outfits. So it’s basically a one-stop shop for everything.” 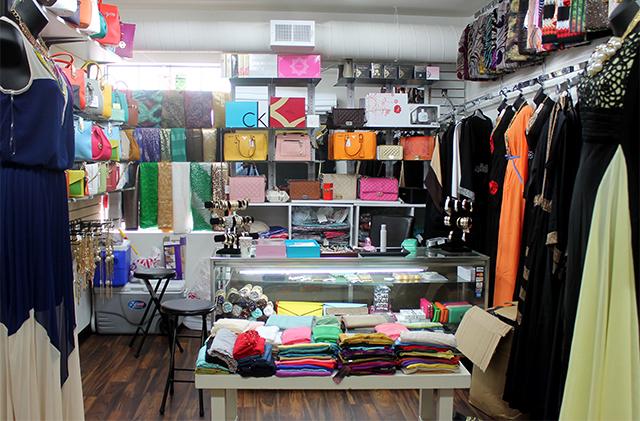 MinnPost photo by Ibrahim Hirsi
Modern Closet opened in April to cater to young Muslims in the Twin Cities.

Hersi and her business partner Istar Mohamed pooled their savings to open the shop. And like many immigrant women who import products from overseas, Mohamed travelled to Abu Dhabi earlier this year to buy the clothes.

Hersi, on the other hand, traveled to New York City and Los Angeles to buy the accessories and the handbags.

‘The scariest thing I’ve ever done’

Hersi came to the United States by herself from a Kenyan refugee camp about a decade ago. Once here, she had to learn to live without her mother and siblings, who sent her to the U.S. so she could assist them financially.

“I had to support myself, support my family, go to school,” she said, as tears clouded her eyes. “I had to start out a new life here on my own. That was the scariest thing I have ever done.”

Even as she underwent the shock of adversity both in the refugee camp and in in Minneapolis, Hersi never lost sight of her dream to become an entrepreneur.

Ten years later, that dream became a reality a few months ago, when Hersi opened Modern Closet. Today, she is most proud of two things she’s achieved so far: a degree in human resources management from Metropolitan State University and Modern Closet.

“I’ve a lot of people supporting me today,” she said. “‘We’re proud of you,’ they tell me. This is just the beginning. I want to own my own empire before I reach a certain age.”

‘We want to show our identity as Somali Muslim women — but also, we want to look good’