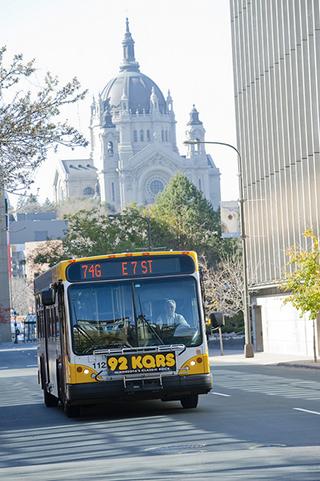 CC/Flickr/Metro Transit
In a new program, students at some St. Paul public schools can get passes that they can use to ride city buses to and from school, as well as for personal use over the weekend.

The iconic yellow school bus may soon become an anachronism in the Twin Cities.

This year, St. Paul Public Schools launched a pilot program to study how feasible it may be to send their high school students to and from school via city bus. And if the program proves successful, St. Paul may soon be joining Minneapolis in doing away with most yellow buses for their public high schools.

The program, which is a partnership between SPPS and Metro Transit, offers free bus passes to students at Johnson Senior High School in St. Paul. Students can use the cards to ride city buses to and from school, as well as for personal use over the weekend.

School officials cite a number of reasons for the switch, including increasing attendance for classes and after-school activities, and improving the academic performance and health of their students. But for St. Paul high schools, which host a large population of free and reduced lunch recipients, officials say the program will also help break down barriers for students of color and low income families, who often can’t participate in certain activities or obtain work because of a lack of good transportation options.

The district estimates the cost of providing the passes to be about the same as operating yellow buses.

“There is a realistic barrier that some our students have to participating in activities,” said Jackie Allen in reference to many students’ poor transportation options. “For plenty of students, that’s not a problem. But unfortunately for a lot of our students, it is.”

Allen, the Assistant Director of Strategic Planning and Policy for the district, worked with Metro Transit to develop St. Paul’s pilot program and said it will benefit all of their students in some way. But for students who don’t have reliable transportation, she said, joining activities like academic clubs or sports, or even just staying after to get help with homework from a teacher will now become much more viable options.

“Those students don’t have to worry about, ‘Oh no, I can’t do math club because I don’t know how to get home,” Allen explained. “Now they have a card that will get them home.”

‘Not a lot of resources for extra transportation’

Johnson Senior High School junior See Xiong, 17, signed up for the program because she needed a reliable way to get to her Post-Secondary Enrollment Option (PSEO) class at St. Paul College every Tuesday, and because on other days she participates in the college prep program College Possible after school.

Both Xiong’s parents drive, she said, but since they work late, sometimes erratic hours, she can’t always count on them to be able to pick her and her brother up after school. “My mom works from 2 p.m. to 2 a.m.,” she said. “My dad, he started working around the end of school last year, so he doesn’t have much time to pick us up after school.”

She said last year she had trouble attending academic clubs because she didn’t know if she had a way to get home. But this year she said it’s easier with the bus pass, since she doesn’t have to check in with her parents in order to stay late.

Mustafa Hassan, another junior at Johnson, uses his bus pass to work at a car wash in downtown St. Paul after school — something he says he wouldn’t be able to do if he took the school bus home. “The city bus will take me straight there,” he said. “If I took the school bus, it would probably take me home first, and then I’d probably be late every day.”

Hassan, 16, hopes to be driving by next summer, he said, but needs to save money in order to buy a car. If it weren’t for the pilot program at Johnson, he said, he isn’t sure he’d have the opportunity to be working right now.

In fact, most students at Johnson don’t drive, said Johnson principal Michael Thompson. Out of the school’s 1,400 students only around 60 of them drive cars, he said, or roughly four percent of the school.

“We’re an urban school with a high free and reduced lunch, poverty rate,” Thompson said. “There’s not a lot of resources for extra transportation.”

But Thompson said he’s already seeing the pilot program fill in the gaps. It’s giving students more flexibility in attending before and after school activities they most likely couldn’t attend before, he said, and it also makes planning those activities easier for the school.

For example, he said, their most recent student leadership club had a 100 percent attendance rate with 230 kids showing up before school to participate. “We never would have been able to do that before,” he said. “And if we did, we wouldn’t be able to have very good attendance.”

Thompson said they’re seeing better attendance across the board in afterschool programs, and so far they’ve issued 1,100 passes to students. Only 85 students opted out of the program, he said, and those kids can still take yellow buses for the year.

Alfonzo, along with two other students from St. Paul high schools, put together their own pilot project through the youth leadership program St. Paul Youth Commission and Wilder Research. They studied the benefits of giving 14 students from both Central and Harding Senior High School free bus passes for six months.

Their study, much like other recent studies on the subject, showed that students used the bus passes mostly to get to jobs, to participate in extracurricular activities and for tutoring after school. “There’s a lot more barriers if your family is of lower income,” Alfonzo said. “If you have a way to get yourself to places it’s a big help.”

Alfonzo and his colleagues presented their findings to the St. Paul School Board earlier in September, in hopes that their work would convince the board to provide bus passes to more schools in St. Paul. Eventually, he said, they hope St. Paul utilizes city buses as much as Minneapolis schools do.

Minneapolis Public Schools began using city buses for student transportation for five of their high schools in 2012, but upped it to seven the following year. This year, around 6,500 MPS high school students are using their Student Pass program, according to Metro Transit, and another 40 schools throughout the metro region are buying into the program by the end of the year.