Sondra Jones has worked at Target Field as a temporary worker for the last two summers. But this summer she found herself waiting for hours in a line with hundreds of other temp workers just hoping to pick up a shift for the day.

“The longest I’ve stood in line is three hours,” Jones said. “The shortest is ninety minutes.”

Even then, there was no guarantee she’d get a job that day, nor any pay for the hours spent waiting to find out. So in September, Jones was one of 136 Target Field temp workers who signed a petition asking for better wages, a more predictable schedule and improved working conditions.

Last week, Minnesota Sportservice, the local subsidiary of Delaware North — the company that contracts the temp agencies who hire workers for Target Field — met with the agencies and temp workers, and came to an agreement that met most of the workers’ demands, though higher wages were not part of the final deal.

The negotiation comes amid the Minneapolis City Council’s efforts to draft new ordinances aimed to protect workers like those that negotiated with Minnesota Sportservice, many of whom are black.

Those temp agencies will now provide their workers with paper checks and direct deposit as options for payment, will require agencies to pay their workers who are asked to wait in line before their shift, and won’t mandate workers to report to shifts if there are life events that take priority, said Minnesota Sportservice.

Target Field also said they’d tell the temp agencies to pay all back pay owed to any temp workers who waited in line before their official shift start time. In Minnesota, employers are required to pay for all hours worked, which includes waiting time, call time, training time and any other time the employee is restricted to the premises of the employer.

That should come as welcome news to Lovie Franklin, who has worked as a temp at Target Field for New Heights. She said workers were not getting paid for the many hours they stood in line. “We’re on our feet for nine hours and only getting paid for five,” Franklin said. 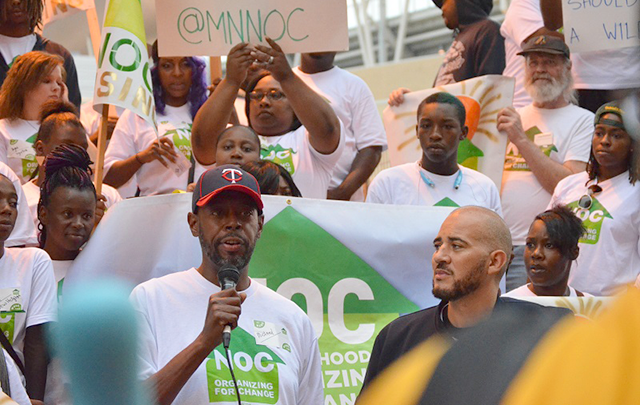 New Heights owner Charles Jones said he pays his temporary staff for waiting in line, and if they didn’t receive any pay, it was because they didn’t report the hours. “I can assure you that they are getting paid if they’re waiting,” he said.

One major complaint from temp workers — one that was cut from the negotiations — was the issue of increased wages.

Minnesota Sportservice food staff at Target Field are unionized under UNITEHERE Local 17, and make between $11 and $14 per hour. But workers for Target Field temp agencies typically make between $8 and $9.50 an hour, for what they say is the same job.

“We’re all doing the same job,” said Michael Higgins, who worked at Target Field through the temp agency Labor Ready. “Every last one of us is doing the exact same thing. They’re not giving us benefits, so why aren’t they giving us the same wages?”

Target Field temp workers win fight for back pay, but not higher wages