Downtown Minneapolis is getting a little taste of Northside this month.

Over a dozen north Minneapolis artists and entrepreneurs are showcasing their work in a pop-up boutique on the skyway level of RBC Plaza in downtown Minneapolis through Dec. 23.

The Northside Holiday Boutique, a project of the West Broadway Business and Area Coalition, opened its doors last week in a vacant studio with hopes of heightening exposure of Northside artists and business owners to Minneapolis’ downtown population, who they say don’t often patronize north Minneapolis.

“It’s good to be down here as a person of color to represent your work with people you don’t normally intermingle with or have access to,” said the boutique’s manager, Mysnikol Miller.

Miller said the boutique is a collective of more than 20 artists and entrepreneurs from north Minneapolis neighborhoods; their wares range from baked goods to paintings to floral decorations and bouquets, and even purses and handcrafted jewelry.

Most people stick around the communities and neighborhoods where they work or live, so not many people outside of north Minneapolis know about these businesses, Miller said. But hosting a boutique in the heart of downtown Minneapolis gives those businesses the opportunity to show off their products to a diverse demographic who may be interested in handcrafted goods and artwork, she said.

Trudy Tidwell started Bouquets ‘n Such Floral and Gifts with her mother Dorothy after losing her home and job during the recession. “I was a victim of home foreclosure,” Tidwell said. “That’s why I moved in with my mom … now we are in business together, supporting one another.”

Their company, said Tidwell, sells floral designs, bouquets, baked goods, essential oils and fragrances, and handcrafted jewelry. And while the two of them have struggled finding their target demographic back home, she said, they think their goods might fare well downtown.

“I have a good product, I just need the right venue,” Tidwell said. “And I think that this [boutique] is kind of that — having the opportunity to be downtown … to have traffic and people that may live in the surrounding suburbs who wouldn’t see us or have any exposure to us in north Minneapolis.”

Vivienne Patton has been making her own purses for decades as a hobby, but started pursuing it seriously last year after she retired from the financial department at Target.

Her purses are all made from repurposed materials such as old leather jackets or coats that people planned to throw away, she said, or decorative belt buckles and pins. 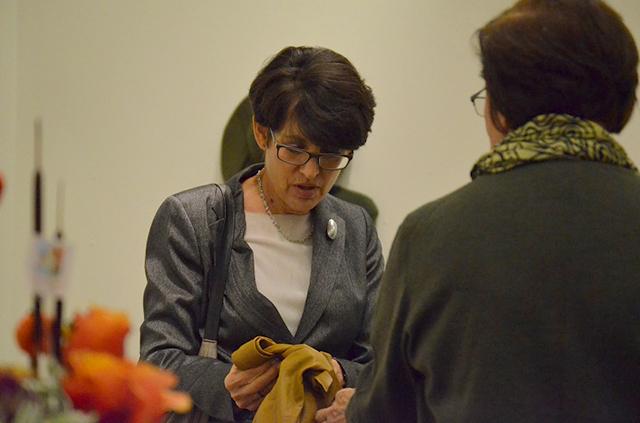 MinnPost photo by Kristoffer Tigue
Attorney Cathy Flanagan stops in the boutique to check out the handmade purses.

Patton mostly sells her items through local stores around town, she said, but she will occasionally run into someone toting one of her purses at random places like bus stops. She’s enjoying the extra exposure from the boutique, she said, but isn’t quite sure if she’d want to open up her own shop if given the opportunity.

“We’re hoping to grow, and we think this is a good place to start,” she said. “Just having the exposure to a different demographic has been huge.”