When Kemba Smith fell in love with a drug dealer in college, she never expected to pay for his crimes. But that’s just what happened.

Smith was sentenced to 24.5 years in federal prison and served 6.5 of them before she was released under executive clemency. Now she’s touring the nation speaking out against “the war on drugs,” which she and other civil rights groups say unfairly targets communities of color.

“I am a prime example that when something’s not right that things can change,” Smith told a crowd at a Minneapolis NAACP lunch this fall. “We need to make sure that these policies aren’t disproportionately affecting us the most, and aren’t intentionally racist and biased towards a set of people.”

It’s a message that’s likely to become particularly important for Minnesota in the coming year, said Minneapolis NAACP president Nekima Levy-Pounds. Though African Americans make up five percent of the state’s population, they occupy 35 percent of Minnesota’s prison beds — figures that have led the NAACP and other civil rights groups to target prison reform as a priority, even as the state’s Department of Corrections is asking for $141 million to expand their Rush City facility in response to overcrowding.

ACLU of Minnesota executive director Chuck Samuelson chalks up Minnesota’s overcrowded prisons to what he calls the state’s harsh sentencing on drug offenders. “Minnesota is now the harshest in the upper-Midwest in terms of drug sentencing,” he said.

From 2010 to 2014, the number of beds dedicated to drug-related offenders increased almost 40 percent, according to the Minnesota Sentencing Guidelines Commission.

Samuelson said that the state has a growing trend for longer sentencing, too. “Not only do we incarcerate people for a lot longer than we used to,” he said. “But we sentence them to probation for a really long period of time … some of these sentences are 20 years probation.”

Recently, the Minnesota Sentencing Guidelines Commission moved forward with sentencing reforms surrounding drug crimes, said the commission’s director Nate Reitz, including how much of a drug a person must possess in order to qualify for first degree drug offenses and reducing the severity of recommended prison time for those convicted.

The reforms were opened to public comment on Dec. 23, Reitz said, and if they pass they could save Minnesota more than 500 prison beds.

Samuelson said that by reducing drug related sentences, the state can solve its overcrowding problem. And by doing that, he said, Minnesota can begin mitigating a policy that unfairly targets and punishes communities of color. “The war on drugs, we believe, implicitly is a war on African American males,” Samuelson said.

A lack of opportunities

For the 35 former prisoners living at 180 Degrees in south Minneapolis, finding housing is a race against the clock.

The group home’s manager Jake Nowak said each of their residents have up to 60 days to find work and an apartment after their release from prison or they’re immediately in violation of their parole and risk going back.

The majority of their residents do end up finding housing, Nowak said, but they face a myriad of barriers and many of them wind up back in jail for technical violations like missing a parole meeting or losing their job.

For example, Nowak said, former prisoners would greatly benefit from state-subsidized housing but Minnesota statutes don’t allow it. “For these guys coming down, who don’t have money and they’re getting low paying jobs, ideally for them they would get subsidized housing,” he said. “But they’re not eligible for that.” 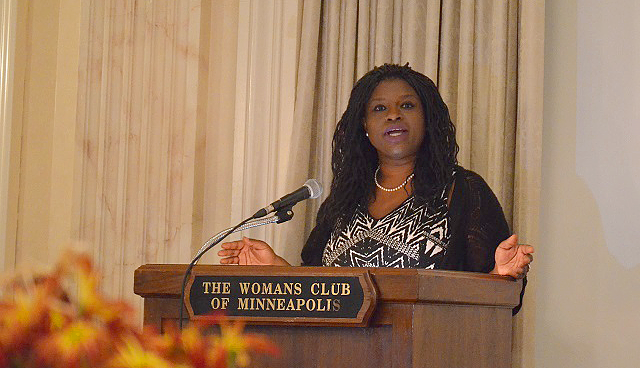 MinnPost photo by Kristoffer Tigue
Nekima Levy-Pounds: “Instead of getting tough on crime, we need to get smart on crime.”

Hennepin County District Court Judge Pamela Alexander said that the main obstacles for offenders after they leave prison is finding work and housing, and many of the restrictions placed on hiring and housing felons need to be reexamined and revised.

MN Second Chance Coalition founder Sarah Walker said now that Minnesota is finally having meaningful conversation over prison reform, adding more prison beds is the last thing the state needs. Rather, she said, policy makers should be bolstering treatment resources for prisoners and looking at how current policies are adding to the overcrowding problem. “I don’t know anywhere else in the United States where we would have such high recidivism rates and have such an overwhelming criminal justice problem, and we continue to do the same thing without looking at change,” Walker said.

Despite being a committee chair for the Minneapolis NAACP, a professor at both Hamline University and Metro State University, Jason Sole can’t vote. That’s because in 2005, he accepted a plea deal for 20 years of probation for a nonviolent drug offense, he said.

Sole is one of an estimated 47,000 Minnesota felons who can’t vote until they’ve finished serving time and any assigned probation.

But for people like Sole who have been given long-term probation, he said, 20 years of not being able to vote is too harsh and disenfranchises a huge swath of people — predominately poor communities of color.

Restoring felon voting rights failed in the 2015 legislative session, but Sole said that the NAACP is still prioritizing it for 2016. “We need to speed up and be more progressive,” he said.

Neighborhoods Organizing for Change organizer Wintana Melekin said that despite the bill failing to pass last session, it still caught the eye of Governor Dayton, and she thinks it has a better chance of passing next year. “We just made sure that [legislators] realized how much of a priority voting rights is to the community,” she said.

Even beyond voting, those who have the most stake in criminal justice reform often have the least visibility in the matter, Walker said, because they’re culturally alienated from the political process. “It’s not like [felons] are giving to PACs to support candidates or showing up at fundraisers,” Walker said. “Their visibility and influence is mitigated in an environment where those things matter in politics.”

Groups push to make prison reform an issue in 2016