On Wednesday night, Cameron Clark dipped one hand into his jacket pocket while the other pointed to the spot where two Minneapolis police officers wrestled with his cousin, Jamar Clark, on Nov. 15, 2015.

“Jamar was shot right here,” said Cameron with reddened eyes. “My cousin was a good person, always smiling. You would never know when Jamar is down, and he would always lift you with a smile.”

That confrontation ended with a gunshot to Jamar Clark’s head. The next day, the 24-year-old was pronounced dead at Hennepin County Medical Center.

On Wednesday morning, after a months-long investigation, Hennepin County Attorney Mike Freeman ruled the shooting justifiable. Hours later, Cameron and hundreds of others gathered for a makeshift memorial outside 1611 Plymouth Ave., where Clark was shot.

For months, the conflicting accounts surrounding the case resulted in a series of demonstrations that brought leaders from the NAACP and Black Lives Matter to north Minneapolis. Protesters demanded that officers Dustin Schwarze and Mark Ringgenberg be prosecuted, that tapes of the incident be made public, that a grand jury not be used in the case and that an independent agency investigate the incident.

Those demands were granted, in part: The Minnesota Bureau of Criminal Apprehension (BCA) took over the investigation of the case; and Freeman decided not to use a grand jury in Jamar’s case — or any other future cases involving police shootings.

But on Wednesday morning, Freeman announced the most critical decision in the case: that MPD officers Schwarze and Mark Ringgenberg will not be charged criminally. In detailing the shooting incident of Jamar on Wednesday, Freeman presented a report chronicling the event, showed videos from bystanders and ambulances, the autopsy reports as well as lab reports and photos from the BCA.

Within hours of the announcement, scores of peaceful demonstrators assembled at north Minneapolis address where Clark was shot, and chanted, “No justice, no peace! Prosecute the police!” 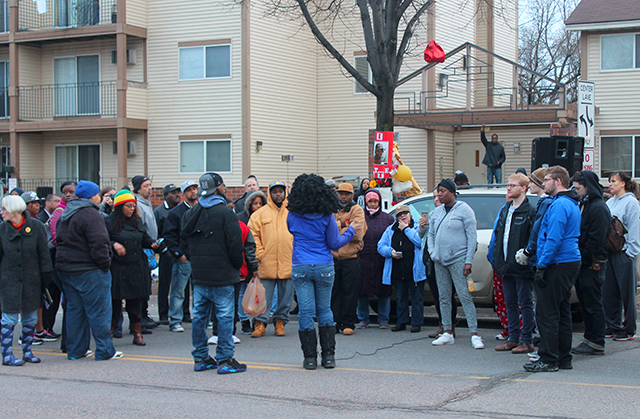 MinnPost photo by Ibrahim Hirsi
Citizens protesting the decision not to charge the officers gathered in north Minneapolis near the site of the shooting on Wednesday afternoon.

They then marched to the Hennepin County Government Center, joining another group of several hundred demonstrators who had marched from Elliot Park. Together they pledged to pressure county, city and state leaders to reform police departments and to change the legal system. Many then returned to the site of the shooting.

Many who came out were incredulous that Freeman could have concluded the killing of Clark, an unarmed black man, was justified given that the officers had shot him just 61 seconds into the confrontation. “It just does not make sense,” Cameron noted. “We’re really hurt. It’s frustrating.”

“There was nothing accurate that he was saying,” Cameron said of Freeman. “They was all lies. That’s why it took them four months to even try to come up with these bull crap stories. I know they put it together. They was edited in the film.”

Cameron also echoed the comments of others who questioned the lack of weight Freeman put on eyewitnesses who said they saw Clark handcuffed. “We got witnesses,” he said. “And Mike Freeman basically said, ‘forget what all these witnesses say, I’m going to believe those officers.’ That’s not right.” 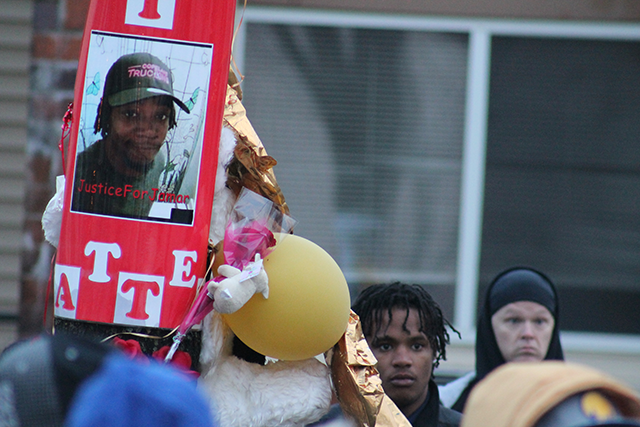 MinnPost photo by Ibrahim Hirsi
Protesters listening to speakers on Wednesday afternoon near the shooting of Jamar Clark last November.

Teto Wilson, who said he watched the shooting event of Jamar just a couple of feet from the scene, noted the account that Freeman relayed was different from what he saw. “Today when Mike Freeman was talking about what happened, I couldn’t believe what I was hearing,” Wilson told the protesters. “Because many of the things he was saying is not what my eyes saw. It was laughable; absolutely ridiculous.”

He added: “Jamar was not fighting for a gun. Jamar was on the ground. The cops had him under control. They had an agenda, and they killed Jamar.”