Annika Robinson understands how hard it can be to eat healthy while living in the city. For a few years in elementary school, and later again in high school, she found herself homeless — a time when healthy food really wasn’t an option. “It’s a big problem from my experience,” she said. “I’ve been homeless before … That made it harder to have certain foods. It’s easier to eat unhealthy.”

These days, Robinson wants to help people ween off surviving on fast food and corner store trips. This summer, she’s assisting in the urban gardening program run through the University of Minnesota’s Landscape Arboretum, Kaleidoscope Place and Pillsbury United Communities, to teach youth how to grow their own gardens, and how to prepare and even sell their food.

The first of the series of programs began on June 14 and aim to teach youth, ages 5 through 18, a range of different skills from basic gardening to simple homemade recipes to knowing how to market your produce or specialty products to local restaurants and businesses. The programs will run throughout the summer with two locations in north Minneapolis, one location in south Minneapolis and another in St. Paul.

“There’s a great need and somewhat a lack of opportunities that inner-city communities have for being involved in programming like this,” said Randall Gage, the Arboretum’s Youth Education Manager.

Gage said the Arboretum began these programs about 30 years ago after realizing that many urban families faced barriers to accessing healthy foods, gardening and the kind of educational experiences taught at their main facility out in Chaska.

Last year, Wilder Research released a report that showed that low-income Minnesotans from the city often face barriers that prevent them from accessing healthy foods, including higher costs, limited knowledge on preparing food, and having poor access to vehicles to get to stores.

Mindy Zittel, who runs the Arboretum’s summer youth gardening program, said by teaching the children how to grow and prepare fresh fruits and vegetables, they’re actually teaching their whole family how to eat healthier as well.

“They can bring [recipes] home and make it with their family and share their knowledge,” Zittel said. “They learn how to plant, they water, they learn how to weed — they learn the importance of all those different things.”

South Minneapolis native Xavier Porter said he joined the urban gardening program back in 1994 when he was just six years old. At that time there was hardly any opportunities to learn how to garden around his neighborhood, he said. The program also provided his first summer job, when he was 12, he said, where he sold produce to local restaurant chefs. “I sold Swiss chard, tomatoes, spearmint, parsley and celery,” he said. 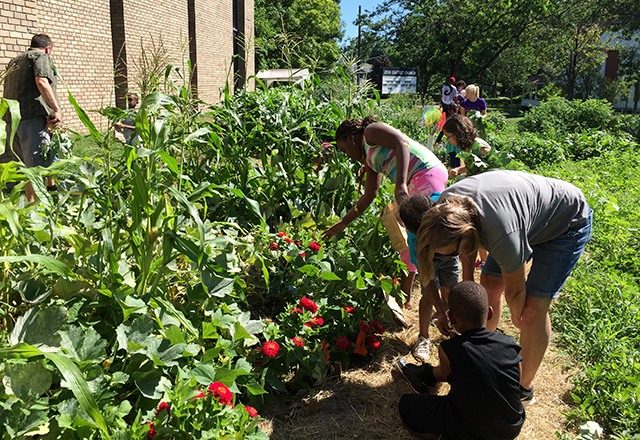 Courtesy of Landscape Arboretum
The first of the series of programs began on June 14 and aim to teach youth, ages 5 through 18, a range of different skills from basic gardening, to simple homemade recipes, to knowing how to market your produce or specialty products to local restaurants and businesses.

Porter’s still with the program today, he said, working as an instructor to six teenagers as they learn about product development, marketing and other leadership skills like communication.

The Arboretum helped to spark a curiosity with gardening in him, Porter said, and he plans to turn it into a career someday. He’s planning to get his master’s degree in horticulture at the University of Minnesota, he said, and figure out a way to continue working with kids.

Robinson is starting her first year as a gardening assistant for the program as well, and she said she’s looking forward to passing on the kind of knowledge that helped her start living more healthily. “You learn a lot of new skills,” she said. “You learn more about the environment, and being in touch with the environment is really important because it affects your health.”