When Channy Leaneagh moved to north Minneapolis three years ago, she didn’t anticipate that the neighborhood’s air quality would be a problem. But last year, her 7-year-old daughter missed over a week of school. “Every single one of those [days] she was home sick with asthma,” she said.

Leaneagh was just one of dozens of concerned residents who attended a meeting last week hosted by Neighborhoods Organizing for Change (NOC) surrounding Northern Metal Recycling, a north Minneapolis metal recycling plant the Minnesota Pollution Control Agency believes may be contributing to dangerous levels of atmospheric lead and other hazardous metals.

NOC organizer Janiece Watts said over the last year NOC has held several meetings to find out what concerns north Minneapolis residents have regarding their neighborhoods, and air quality has come up time and time again. And in a recent survey NOC conducted in north Minneapolis, 83 percent of the 408 people who took the survey said they had or knew someone who had asthma.

All that followed a report from last March, when the MPCA released new data revealing unhealthy levels of lead in the air in north Minneapolis. According to the Department of Health report, the north Minneapolis area, which includes Leaneagh’s Hawthorne neighborhood, has a higher rate of elevated lead levels in children. At last week’s meeting City of Minneapolis officials also stated that this area has the highest rate of asthma hospitalizations in the state.

Now the MPCA wants to stop the recycler’s operations, at least until it can re-evaluate the facility and ensure it’s not a significant contributor to the recent spike in lead contamination in an area that city officials say already suffers from poor air quality. Last month, the agency filed to revoke the operating permit of Northern Metal Recycling’s north Minneapolis facility on the basis that the plant was conducting operations that weren’t disclosed under its current permit.

At the time, MPCA officials said they believe those operations may be contributing to higher levels of lead and other hazardous metals found in the air surrounding the area. “The facility, which operates a metal shredder at the site, is believed to be a primary source of particulate emissions that have repeatedly violated state air quality standards near the site since 2014, when the MPCA began operating air monitors near the facility,” the MPCA stated at the time of filing.

MPCA Land and Air Compliance Section Manager Sarah Kilgriff said the MPCA will continue pursuing permit revocation. The community may participate by submitting public comments to the MPCA, and staying aware of the case as it progresses.

Through June 20, the MPCA is holding a public comment period, asking residents to submit their thoughts on what they believe should be done with the Northern Metal plant in light of the new findings. The agency is collecting the comments as part of the permit revocation process and it will take all comments into consideration, Kilgriff said.

Kilgriff said the MPCA isn’t alleging that Northern Metal is violating the emission limits set by its permit. But if it is, it wouldn’t be the first time. The facility was fined $15,000 in 2010 by the MPCA after it measured levels of mercury coming from the building that exceeded state emission standards, Kilgriff said, and in 2014 and 2015, it found elevated levels of lead, chromium, cobalt and nickel in the atmosphere surrounding the building that exceeded health risk guidelines. Northern Metal Recycling did not respond to attempts to get comment for this story. 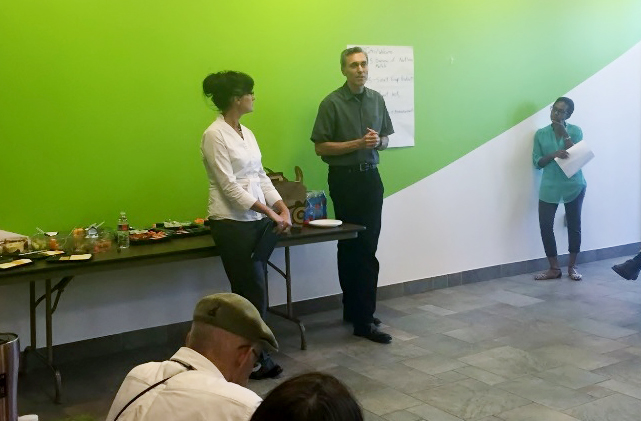 Courtesy of NOC
MPCA representatives Sarah Kilgriff and Ned Brooks speaking during a presentation to residents at the Neighborhoods Organizing for Change offices.

Roya Damsaz, who works across the street from the recycling plant, says she often hears her coworkers coughing and was concerned it had to do with dust she believes is coming from Northern Metal.

“You can see when it hasn’t rained in a few days there’s a lot of particles and dust all over the cars that are in the parking lot right across the street,” Damsaz said. “A lot of them are just covered with dust. This is what people breathe.”

Damsaz said she doesn’t want going to work to be a health hazard so she hopes the MPCA succeeds in revoking Northern Metal’s permit. “One of my close coworkers, she coughs a lot. Almost all year round,” she said. “When she works from home she said it’s not as bad.”

While the city can’t act as a regulatory figure in this case, Huff said, it does plan to submit an official statement as part of the public comment period, and it’s asking their staff members to do the same.

The move would have the city officially back the MPCA’s goal to revoke Northern Metal’s permit to operate, he said, and hopefully be influential as the case will likely become a legal battle. The full City Council will vote on the measure this Friday, he said.

As for Leaneagh, she said she won’t be leaving the neighborhood even though it’d be the safest thing for her daughter. If people leave north Minneapolis, she said, the problems won’t get fixed.

“As a parent I’ve made a horrible choice in living in this area, but at the same time you don’t want homeowners to start moving or people to abandon the Northside,” she said. “The historical problems always happen to black neighborhoods. We have to do better than that.”

Correction: This story contains corrections, including: An earlier version of this story incorrectly named the host of the event last week and incorrectly stated what would be done with comments sought from the public.