Dudley Voigt thinks everyone in north Minneapolis should own a work of art, even if it only cost a couple bucks. “That might be $1 art, that might be $10 art,” she said. “But every north side house should have a piece of art, however you define it.”

That’s the concept that sparked the FLOW Northside Art Crawl, a three-day arts festival that spans over a mile of West Broadway Avenue in north Minneapolis, from the Mississippi River to Penn Avenue North. The crawl, which runs July 28-30, aims to showcase local artists from north Minneapolis and celebrate the area’s growing artist community.

This year, the annual event will host around 35 different sites featuring an estimated 300 visual and performing artists from a variety of genres — from paintings and crafts, to documentaries and puppet shows. “The mission of the event is really to shine a light on the north side for people who maybe have never been on the north side,” said Voigt, who runs the crawl as its artistic director.

FLOW started 10 years ago as a rather modest one-day festival, she said, with just around 1,000 people in attendance. But since 2006, it’s been stretched out over a three-day period to accommodate the festival’s growth. Last year, she estimates, around 10,000 people visited.

Director and videographer D.A. Bullocks moved to north Minneapolis from Chicago five years ago when he first got involved with FLOW. He said the festival has grown significantly over the years and it provides people with a positive experience of an area often highlighted in the media for violence and crime.

“I’ve seen it grow and really become a representation of all the different artists in north Minneapolis,” Bullocks said. “It’s a great opportunity for people to experience north Minneapolis outside of their own negative connotations.”

This year, Bullocks will be screening his 20-minute documentary short film, “Fire in the Heart,” about a fire that destroyed an entire block of retailers and offices along Broadway Avenue last year. The story is told by those who lost something in the fire, and how the community came together to rebuild after it.

John Bueche can see FLOW’s growth, too. He lives just a few blocks from one of the festival’s main intersections and has been participating in the event for the last two years. “I think it’s the biggest ever this year, in terms of artists, venues and activities,” he said. 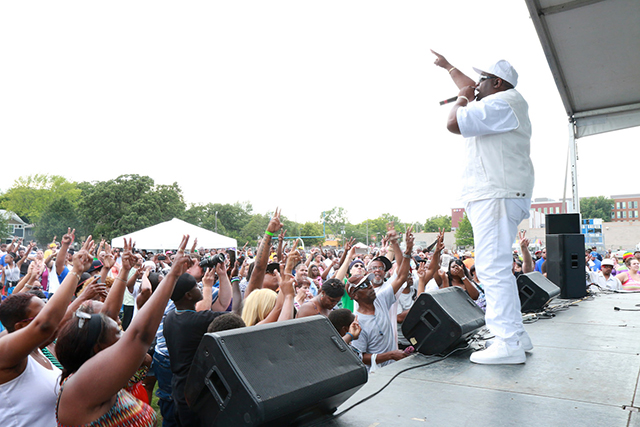 Courtesy of FLOW Northside Arts Crawl/West Broadway Business and Area Coalition
Director and videographer D.A. Bullocks: “It’s a great opportunity for people to experience north Minneapolis outside of their own negative connotations.”

Bueche, a professional artist for over a decade, has been participating in the event since 2014, and this year he said he’ll be making an interactive sculpture that eventgoers can draw and write on themselves. He’s looking forward to all the new acts and venues being added this year, he said.

Voigt said this year’s festival highlight will be when they unveil $125,000 worth of public infrastructure, such as benches, planters and information kiosks, which were designed and fabricated by local artists and businesses. The work, paid for by a $250,000 national grant, will be installed all along the West Broadway corridor, she said.

On top of that, Voigt said, the West Broadway Business and Area Coalition (which produces FLOW) will also be revealing a new public plaza on the corner of Broadway and Logan Avenues on Friday afternoon, where they’ll host a series of different artist events throughout the weekend. Afterwards, the plaza will act as a place for people to gather and host community events.

Voigt said that she’s happy to see that FLOW continues to grow each year, but more importantly, that they’ve been able to add new infrastructure that she believes will help make the area more walkable and inviting for the community. “It will change everyone’s experience as they go down West Broadway,” she said.