Hundreds of subcontract workers for the Minneapolis-St. Paul International Airport are threatening to strike if their demands for a $15-an-hour wage and the right to unionize aren’t met.

About 700 employees for Delta Air Lines subcontractor Air Serv — the company that manages the airport’s cleaners, cart drivers and luggage handlers — are asking for higher wages and for the right to unionize under Service Employees International Union Local 26 (SEIU).

Last week, the majority of those workers — about 500, according to SEIU officials — voted to go on a 24-hour strike within the month if their demands weren’t met. On Monday, a handful of them testified in front of the Metropolitan Airports Committee to voice their concerns in hopes to expedite the negotiation process. However, no set date on the possible strike has been set, union officials said.

“This has been an ongoing campaign for workers there for several years,” said SEIU President Javier Morillo, speaking about the Air Serv employees’ attempts to unionize. “But it hasn’t gone anywhere. That’s why they’ve decided to authorize a strike.”

Asmare Meshesha, a baggage handler for Air Serv for more than three years, said he wants to join a union to protect him from what he perceives as retaliation from his employer.

Back in 2012, he said, several employees were fired for what Meshesha believes was for bringing up concerns over working conditions. Meshesha said he’d feel much more comfortable working for Air Serv if he had a union protecting him. “The union will fight for us,” he said.

For three years, Air Serv’s employees have been attempting to unionize, Morillo said, but until this week the two sides haven’t been able to decide under whose jurisdiction the potential union members would fall.

Most MSP employees, such as flight attendants and pilots, fall under the Railway Labor Act, a federal law that dictates the terms of the railway and airline industries on a national scale. Under this jurisdiction, Air Serv employees would bargain as a national unit, and the terms of their contract would be the same no matter where in the country they are.

Instead, the SEIU wants Air Serv’s employees to fall under the National Labor Relations Act (NLRA), which would have the union bargain as a local unit. 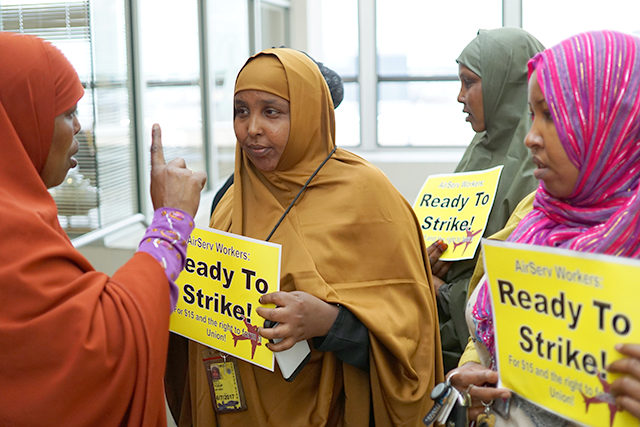 Courtesy of SEIU
The SEIU wants Air Serv’s employees to fall under the National Labor Relations Act, which would have the union bargain as a local unit.

In a written statement, Air Serv said it respects the right for its employees to seek union representation, and that they “currently maintain constructive union relationships at many airports nationwide.”

“Air Serv supports and complies with employment standards established by the Metropolitan Airports Commission just last year, including enhanced wages and benefits for all of our employees,” the statement continued.

Morillo said Air Serv recently agreed to consider allowing the union to fall under NLRA jurisdiction, but they are still negotiating how employees will elect their union representative.

Last year, SEIU negotiated a dollar raise for roughly 2,800 MSP airport workers to stack on top of the state’s new $9 minimum wage — but Meshesha says $10 an hour still isn’t enough to support his family, especially with Air Serv recently cutting his hours from 40 hours a week to 35.

Abera Siyoum works part time for Air Serv as a cart driver on top of working a second part-time job manufacturing computer parts. Siyoum, like a lot of his colleagues, works two part-time jobs, he says, because AirServe won’t offer him full-time hours.