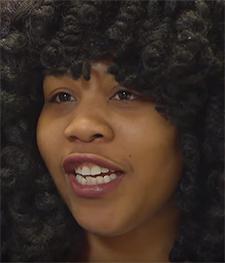 After a year already marked with increased shootings and deteriorating community relations with police, Redmond thinks what north Minneapolis youth really need is a change of pace. “They need some positivity,” she said. “It really just hit me.”

So, Redmond, along with a coalition of residents, community organizations, civil rights groups and local businesses got together to organize the first annual Win Back the Community Summer Festival, to celebrate their youth and showcase local art, culture and businesses in north Minneapolis. The event will take place on Aug. 27 at Harrison Park in north Minneapolis and will include a showcase of north side artists, a variety of local vendors, a chalk-art competition, a basketball tournament and a limited supply of free food and drinks.

There will also be a school supplies giveaway, Redmond said, thanks to the generous donations of local organizations like Metro Transit, Cookie Cart, the Minneapolis NAACP and Bobby & Steve’s Auto World. Eventgoers can even partake in free yoga sessions, she said. “[There’s] just a lot of fun activities.”

Steven Johnson, one of the organizers of the event, said he agreed to participate in the festival because he wanted to see more opportunities for young artists on the north side. “We’re overlooked and not taken as serious,” he said. “I want to find a way to help younger visual artists succeed.”

Johnson, 19, grew up in north Minneapolis and wants to see more opportunities for children of color who live there. He’ll help oversee the chalk-art competition at the festival, he said, where the winner will receive a $1,000 grant to go towards anything art-related — from buying new art supplies, to paying for a larger art project or gallery exhibit.

Denetrick Powers, Transit Organizer with the Harrison Neighborhood Association, said he’s most excited about the festival bringing people together and fostering positive relationships between the neighborhood’s youth and the community.

Bishop Richard Howell of the Shiloh Temple International Ministries in north Minneapolis said the area has dealt with decades of poverty and crime, but this year has been particularly trying for the community.

According to Minneapolis Police Department data, the city saw an early-year uptick in violent crimes compared to previous years with the majority of those occurring in north Minneapolis. And in the last two months alone, two fatal shootings occurred in the city’s north side neighborhoods, including the death of a two-year-old child. 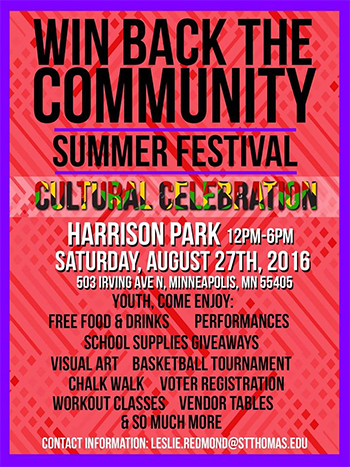 On top of that, Howell said, the African American community is still dealing with its relationship with police over high-profile shootings like Jamar Clark and Philando Castille, which sparked months of ongoing protests in their community and among groups like Black Lives Matter.

But Howell said that the Win Back the Community Festival won’t be about protesting or about political or economic reform. Instead, he said, they simply want to have fun and celebrate the positive things that are happening in their neighborhoods.

Howell said he was particularly impressed that this event was organized almost entirely by youth from north Minneapolis. “I’m very proud of this group of young people who have a passion for the community,” he said. “They really felt that it was upon them to make a difference in the community on the north side.”

Steven Johnson agreed, saying the festival is about how to foster peace through positive actions within north Minneapolis. “Right now it’s kind of chaotic,” he said. “With all the shootings and the violence we need to re-center ourselves and win back ourselves.”