The group, whose lead singer lives in north Minneapolis, held an impromptu free concert at a private residence in northeast Minneapolis earlier this week in partnership with Neighborhoods Organizing for Change (NOC), to raise awareness of a metal recycling plant the Minnesota Pollution Control Agency believes may be contributing to high levels of atmospheric lead and other contaminates in the area.

Last week, Northern Metal Recycling had to shut down part of their north Minneapolis metal recycling plant after a Ramsey County District Judge ordered the company to idle part of their operations until the MPCA either issues a modified air permit for the facility or the company proves they aren’t harming air quality in the area.

“We believe that Northern Metals is a significant contributor to the ongoing air violations in north Minneapolis and the court’s decision is a great step forward for the people living in those neighborhoods,” said MPCA Assistant Commissioner David Thorton in statement in August.

MPCA filed an injunction to temporarily shut down the plant earlier this summer and also filed to revoke the facility’s permit after the agency discovered Northern Metal was conducting operations not approved in its current permit. Then, in late August, Ramsey County District Court Judge John Guthmann moved forward with the injunction, ordering the plant to temporarily halt part of the operation — the facility’s metals recovery plant and an attached rain and snow shed — by Sept. 2, but allowing the metal shredder to continue operating. Northern Metal requested a hearing before an Administrative Law Judge to appeal the permit revocation process. A ruling on that request is expected this fall.

Northern Metal said last month that they’ve already made significant improvements to their plant over the summer and that they’re submitting those improvements for approval by the MPCA.

Northern Metal President Stephen Ettinger said according to their MPCA issued permit, the facility is in compliance “with respect to lead,” and that, “it’s important for people to understand the facts.”

NOC organizer Janiece Watts said the ruling came as a pleasant surprise, but because of ongoing health issues for north side residents, they want to see the plant out of the neighborhood entirely. “I think what’s next is to keep demanding that there’s a full shutdown and that their permit is revoked without reissuance,” she said. 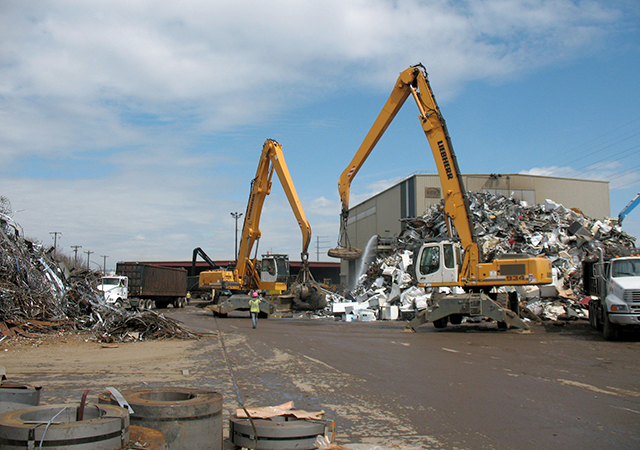 Creative Commons/MPCA Photos
MPCA filed an injunction to temporarily shut down the plant earlier this summer.

MPCA installed air monitors near the recycling plant in 2014, and last year they released findings that showed high levels of lead in the air in north Minneapolis. According to a Minnesota Department of Health report, north Minneapolis has a higher rate of elevated lead levels in children. City of Minneapolis officials have also stated that the area has the highest rate of asthma hospitalizations in the state.

Minneapolis City Council Member Jacob Frey, whose Ward 3 sits just across the Mississippi river from the plant, said the north Minneapolis recycling plant has been an issue even before he took office, and he gets calls from residents complaining about noxious odors and concerns over air quality every other day. “What we’re doing is calling for alternatives to an issue that’s not new,” he told the crowd Wednesday night. “North Minneapolis — our communities of color — they deserve good health.”

But NOC’s Watts said ensuring better air quality for north side residents doesn’t fall squarely on the company’s shoulders, but also on city and state officials. “There has to be more accountability on the hands of the companies, but also our city and our state need to be more diligent in enforcing current regulations so we don’t run into a problem like Northern Metal,” she said.