When Feyisa Lilesa, a medal-winning Olympic runner from Ethiopia, visited Minnesota last weekend, most of the state didn’t notice.

Lilesa became a local hero among Oromo people last month after flashing a well-known protest sign against his country’s government at the finish line. The move prevented him from returning home to Ethiopia, fearing reprisal from those in power, but it made him welcome among many Oromo people living in the United States.

Oromos have been protesting against their government for decades, and many have fled the country since the 1970s fearing persecution. When violent demonstrations erupted over the Ethiopian government’s plans to reallocate farmland for development last November, some human rights groups said hundreds were killed by government forces in the backlash.

Here in Minnesota, thousands of Oromo people gathered at the Minneapolis Convention Center to welcome Lilesa as he visited the city over the weekend. But Minnesota’s Oromo leaders say that the event’s lack of attention reflected a longstanding feeling of invisibility among Oromos living in the state.

“We couldn’t accommodate everybody because there was no space,” said Oromo Cultural Institute of Minnesota Board Chair Girma Hassen. “But there was no media.”

The feeling isn’t a new one, Hassen said, and many Oromo living in Minnesota feel that their culture and history isn’t known or understood by the rest of the state’s population.

Earlier this summer, a survey conducted in partnership between the Oromo Cultural Institute of Minnesota (OCIM), the Amherst H. Wilder Foundation and the West Bank Community Coalition, showed that most of the city’s Oromo face serious language barriers — and often feel invisible to the rest of the state.

The survey talked to Oromo people living in Minneapolis’ Cedar-Riverside neighborhood — an area with one of the highest concentrations of East African immigrants in the state. Of those who took the survey, 93 percent reported facing a language barrier and 88 percent believed most Minnesotans don’t know anything about their culture and history.

For many Oromo people living here, Hassen said, the language barrier complicates simple tasks like taking public transit, visiting the doctor, and even opening up bank accounts and setting up a cell phone plan. “People need to feel like they belong here,” he said, “that this is their home.”

OCIM estimates more than 40,000 Oromo live in Minnesota, based on immigration records they’ve obtained, though the state’s demographer’s office puts that number at less than 10,000. That still leaves Oromo as the state’s second highest East African population, behind Somalis.

Hassen said he hopes the survey will help convince public officials to pay more attention to Oromo concerns as OCIM begins to apply for more state grants. In time, Hassen said, they hope to see more translations in Oromo at light rail stops and on buses, and a general awareness of their culture among the state’s private businesses, like banks, especially in an area like Cedar-Riverside where there’s a high Oromo population.

But ultimately, he said, they hope to open a new Oromo community center to act as a cultural and educational hub for the city’s Oromo. “When we have a center, we will have a place to gather and share our language and our culture,” Hassen said. “We really need a center in Minneapolis.” 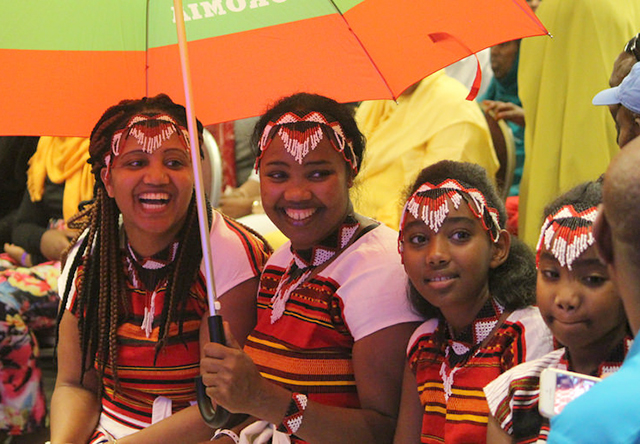 Right now, many Oromo youth aren’t learning their home language or their culture, and many older Oromo people can’t speak English. The result is a cultural rift between parents and their children, Hassen said. A new center where they could host cultural events like dances, and provide language and job training classes would help repair that rift, he said.

Back around 2005, the Cedar-Riverside neighborhood had an Oromo community center, but it has since closed. Now Minnesota’s sole Oromo center — The Oromo Community of Minnesota — exists in what used to be a small church in St. Paul. And Hassan Hassan, an Oromo resident who lives in Cedar-Riverside, said the St. Paul center is simply too small for their needs. “It’s overcrowded for all the people who come in to participate,” he said. “A facility to accommodate a lot of people … it’s been needed for a long time.”

Awal Windissa, Oromo Community of Minnesota board member, agreed. The old church building can host up to 250 at a time, he said, but it no longer accommodates the state’s growing Oromo population. “The Oromo population is increasing steadily,” Windissa said, “and the community needs a bigger space.”

Hassen said OCIM is currently looking at a building in the Seward neighborhood that would meet their needs, but they’d need to raise at least $2.5 million to even consider buying it. He’s hoping increased public awareness and better access to state grants will help them get there. “We are Oromo-Americans trying to live the American dream,” he said. “We need a place to claim as our own.”

A growing Oromo community struggles for visibility in Minnesota