Last summer, after a St. Anthony police officer fatally shot Philando Castille in Falcon Heights, people of color from across the Twin Cities hit the streets in protest. It wasn’t the first time a police shooting of a black Minnesotan caught the nation’s attention, of course. Less than a year prior, in the fall of 2015, the fatal shooting of Jamar Clark by Minneapolis Police triggered three weeks of fierce protests in front of the nearby police station only blocks from where Clark was shot.

These incidents, along with several other high-profile police shootings of African Americans across the nation, have fueled the ongoing debate over police use of deadly force — and whether the country’s policing structure is in need of major reform.

In some large metro areas like New York City and Chicago, campaigns to wean communities off the need for traditional law enforcement have become increasingly common. And some Twin Cities activists are hoping to follow suit. Over the last several months, Neighborhoods Organizing for Change (NOC) has been meeting with community members in north Minneapolis to discuss and plan ways to divert state money from the city’s police department and channel it into things like mental health resources, social workers and other alternatives they think would better help the area’s communities of color.

“The Minneapolis Police Department has an annual budget of [$160] million a year … that money is not being well spent,” NOC organizer Tony Williams told crowd of more than 50 on Oct. 8 at NOC’s main office in north Minneapolis. “Imagine how that money is getting spent now on Tasers and guns and fortifying precincts. Think about it being spent on community centers, on councilors, on social workers, on mental health response teams. There’s so much we could do with this money.”

In April of 2015, when Tania Harris got into a heated argument with a woman who wouldn’t leave her home, Harris’ mother called the police fearing for her daughter’s safety. But when Robbinsdale police arrived, Harris was found chasing the woman with a knife. an officer shot Harris twice, wounding her in the stomach.

Harris later plead guilty to second-degree assault, but she wishes the officer had tried to de-escalate the situation before resorting to firing his weapon. And she thinks if someone she knew from the community had intervened the situation may have ended differently. “It would be better if there was more community members to bring down situations instead of having a police officer come into my home and shoot me,” Harris said.

What Harris is referring to is called community policing, and it’s been widely discussed over the years as an alternative to today’s current policing structure, where officers often live outside the city where they work. In Minneapolis, only six percent of the city’s police officers live within city limits, and many activists say that creates misunderstandings and mistrust between the residents and police.

But more and more large cities are experimenting with community policing models, said NOC’s Williams, who pointed to campaigns in New York City, San Antonio and Chicago, where organizations are working towards preventing and responding to crime without police intervention.

In Chicago, programs like CeaseFire and Cure Violence aim to treat violent crime as a disease rather than a criminal justice problem, focusing heavily on community mediation rather than penalization to reduce violence. In 2009, the National Institute of Justice reported a reduction in violent crime of up to 28 percent in some of the cities where the programs are running.

Still other options discussed by NOC’s members include better police training in de-escalation, preventative mental health and social work resources, and possibly creating a new emergency response team of mental health professionals who would respond to situations before police get involved.

A breakdown in cooperation

In 2005, Brooklyn Center and Brooklyn Park along with Hennepin County formed the Joint Community Police Partnership after both cities experienced a heavy influx of East African immigrants. The new civilian committees were meant to act as a liaison between the cities’ police departments and the new residents. “[The demographic change] was pretty unprecedented at the time,” said Brooklyn Park Police Chief Craig Enevoldsen, “and there was a lot of conflict happening between the police and some of those cultures because we didn’t understand each other.”

But Enevoldsen said their new committee, with whom their department meets with monthly, has drastically helped improve those relationships. And he’s hoping it’ll help again, he said, to address what he calls widespread rising tensions between police departments and communities of color. “There’s a lot of emotion. There’s a lot of mistrust. There’s a lot of anger,” he said. “I think it’s manifested across the nation.” 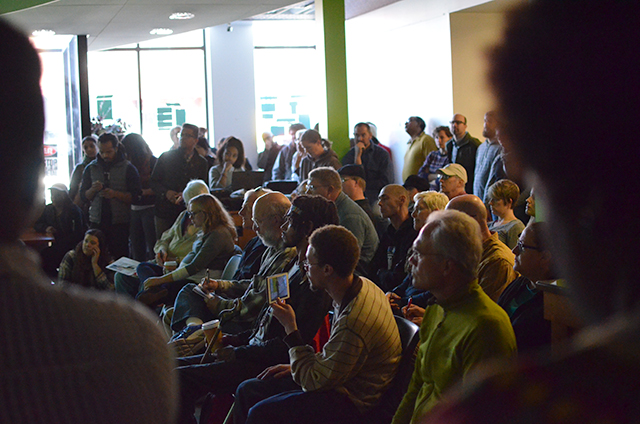 MinnPost photo by Kristoffer Tigue
A crowd of more than 50 people attended the Oct. 8 meeting to discuss alternatives to traditional policing.

On Oct. 19, the partnership will host the first of two community input meetings at Park Center High School in Brooklyn Park, to hear and document just what the community’s concerns are so the two cities’ police departments can better address them. The second meeting will take place at Brooklyn Center High School on Nov. 5.

For D’Narius Lewis, who’s black and also a member of the partnership committee, the meetings will provide an opportunity for communities of color and police to work together — where he believes there’s been a breakdown in cooperation. “When it comes down to it there needs to be unity in the solution,” Lewis said. “Both sides are frustrated because the good cops are getting thrown under the bus with the bad cops.”

‘Rolling a boulder up a hill’

But NOC Executive Director Anthony Newby is more skeptical, especially when it comes to Minneapolis. He said for years NOC has tried to work with the Minneapolis Police Department and other city departments on incremental reforms, but that change simply isn’t happening fast enough. And more often than not, he said, when NOC presented their suggestions they went wholly ignored. “We’ve attempted that in the past,” Newby said. “It was like rolling a boulder up hill.”

Lena Gardner, an organizer with Black Lives Matter Minneapolis, agreed, and she’s no longer interested in working with police on solutions. She said when it came to community input meetings with MPD on things like body camera policy, BLM’s input was entirely left out of the final product.

For Newby, that frustration is what’s fueling their campaign to defund police departments for alternative programs, and he says they’re not alone. According to NOC membership data, more than 10,000 Minnesota residents have expressed a need for immediate police reform in Minneapolis. “People are hungry for something transformational, something radically different,” Newby said. “Not tweaks.”