Amber Jones doesn’t want to see important elections in her city take a back seat just because of an unorthodox presidential race. “The presidential election is not the only thing on the ballot,” she said. “There are a lot of things happening in our backyard that affect our everyday lives.”

So Jones, an organizer with Neighborhoods Organizing for Change, along with partner organizations ISAIAH and Minneapolis Rising, put together a forum last week to help raise awareness on this year’s election for the Minneapolis Public Schools (MPS) Board of Directors, where residents will be electing board representatives for District 2, 4 and 6 — as well as an at-large candidate.

The forum, which took place on Oct. 26 at the New Creation Baptist Church in north Minneapolis, was a chance for community members to meet with the eight candidates and discuss their platforms for the 2017-18 school year. But the two-hour event also acted as a vehicle to discuss Minnesota’s persistent educational disparities, with many attendees grilling the candidates on issues directly affecting the city’s communities of color.

Despite efforts to lessen the state’s educational gaps, students of color still trail behind white students in math, reading and science by as much as 38 percent, according to the Minnesota Department of Education — with black students subject to the widest disparities. Black and Native American students also graduate from high school at rates 20 to 30 percent less than white students.

For Jones, who moderated last Wednesday’s event, meeting with the candidates was a chance for the community to talk about what MPS plans to do differently to address those numbers, especially with north Minneapolis’ District 2 seat up for grabs. But she said it was also a way to hold the candidates accountable after the election. “Every day students are falling behind. Every day families are not getting served equitably,” Jones said. “Those are pressing issues, and we wanted to make sure we could get candidates on record on those issues.”

The high-profile shootings of Jamar Clark and Philando Castile will affect Minnesota politics for years. At Wednesday’s forum with seven school board candidates (one candidate, Doug Mann, was a no-show), the issue was manifested in the form of a debate over school resource officers, or SROs — city police officers often stationed directly in schools.

Malcolm Wells, an audience member who works at Harrison Educational Center in north Minneapolis, said he’s witnessed SROs treat students there condescendingly and in one instance even remark, “I’ll see you on the streets” to one student after a particularly heated interaction. 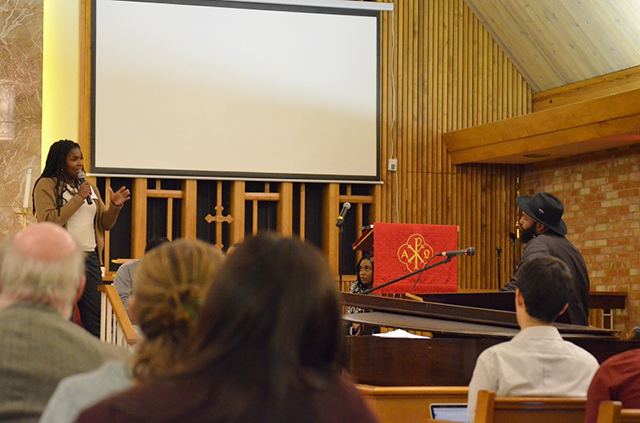 Wells’ concerns that the officers stationed at his school only exacerbated already tense relations between communities of color and police highlighted the current controversy surrounding the use of SROs in Twin Cities schools. Earlier this year, the school board approved extending its contract with the Minneapolis Police Department for another year, but that decision was met with harsh criticism from some communities, particularly in areas like north Minneapolis where tensions between communities of color and police run high. For the seven candidates at Wednesday’s forum, the issue split down the middle, with about half the candidates against the use of SROs in schools and the other half for it, or on the fence.

Josh Reimnitz, who’s running for re-election in District 4, voted to extend the SRO contract, but said at Wednesday’s event that he had made a mistake. After hearing what students and the community had to say about their experiences with SROs at their schools, he said, he wants to reform the contract next year if he’s re-elected.

Kim Ellison, a former District 2 board member who’s running this year for the at-large position, voted to renew the contract for SROs because the district doesn’t have any feasible alternatives yet. “Our alternative right now is 911,” she said. “That’s not an alternative in my eyes.” 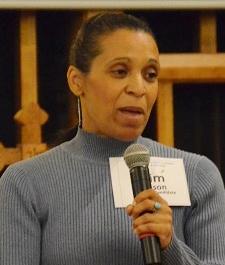 Ira Jourdain, who ran unsuccessfully for an at-large seat in 2014 and is running for District 6 this year, agreed, saying SROs are useful until a better alternative can be provided. “At this point I do support SROs in our schools,” he said. “However, if we had the right tools and we had the right cooperation with people, I don’t believe we’d need them.”

But Tracine Asberry, District 6 incumbent and one of only two school board members who voted against the contract extension, said she’s still against the use of SROs in schools, and that the district isn’t doing enough to come up with better alternatives quickly. “The problem is that we can’t even imagine a nonviolent crisis intervention,” she said. “We go right to policing. Because people can’t imagine something different, they keep the same.”

Shonda Allen saw those statistics playing out firsthand for her own daughter. She said her daughter, who’s currently enrolled in Minneapolis Public Schools in eighth grade, has switched schools three times in two different districts because of behavioral problems with staff and other students. “She was bullied,” said Allen. “She was academically behind. There was many issues. ” 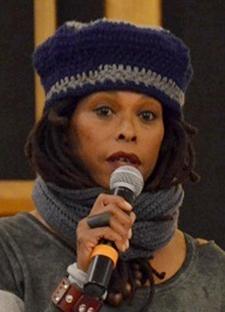 Currently, MPS employs more than 1,700 education support professionals who make up roughly 25 percent of total staffing in the district. But that doesn’t take into account specific schools and their turnover rates.

Reimnitz said he partially blames the district for poor retention of staff, by implementing too many changes in their programming. That often leads to support staff needing to relearn how to do their job every two or three years, he said.

School board candidate Kerry Jo Felder, who’s running for the District 2 seat, said she wants to see the district focus on hiring support staff from the community, so that they’ll be more invested in the students’ lives and less likely to leave. Felder also said it’s particularly important to get more and better staffing in north Minneapolis schools, where she says funding isn’t adequate for their students’ needs.

But Bob Walser, who’s challenging Reimnitz in District 4, said it’s not that easy, and a lot of those ambitions lean on overall district funding. “There’s only so much we can do within the system itself,” Walser told the audience Wednesday night. “Over the last 12 years, funding for education in the entire state of Minnesota has decreased by 11 percent.”

Another issue audience members brought up at Wednesday’s forum was teacher diversity. Until recently, only 16 percent of MPS staff were people of color. But efforts by the district bumped that number up to 30 percent this year.

Reimnitz said he hopes to see the district continue its efforts to get that percentage up even higher, but also that he thinks the state could improve teacher diversity by reforming the state’s licensure system and bringing in out-of-state teachers.

Earlier this year, an audit of Minnesota’s teaching licensure system declared the need for a complete overhaul of the system — a system auditors said often made it too difficult for qualified, out-of-state teachers from getting their license in Minnesota.

Walser said he believes the state’s lack of teachers of color is a result of a national teacher shortage, driven by low salaries and dwindling support systems across districts. “I think the key issue here has to do with respect,” he said.

But Asberry said the teacher shortage in Minneapolis, in terms of teachers of color, is an issue of retention, not recruitment. She thinks if the district’s internal culture were more welcoming to diverse cultures, then more people of color would likely apply. “What did we do to change the culture of the profession to make sure that it did not just reflect a white culture?” she asked.