Misty Rowan rubbed some warmth back into her hands before picking up a megaphone to address a growing crowd on the corner of Nicollet Avenue and East Lake Street. The temperature hovered just above ten degrees as the year’s first real chill swept across the Twin Cities. “We don’t get to pick the weather,” Rowan said, “but we knew this was going to be a really big rally just because a lot of people are scared of Trump being elected.”

Saturday’s rally, organized each year in Minneapolis by local activist group the Anti-War Committee, is part of an international celebration of Human Rights Day every Dec. 10. But Rowan, an organizer with the group, said this year’s bigger-than-normal turnout was largely in reaction to an uptick in racially motivated incidents in Minnesota and across the country since the election of Donald Trump’s last month. More than a hundred rallied at the intersection of Lake Street and Nicollet Avenue to protest against the president-elect, then marched to the All God’s Children Church about a mile away.

The event also drew a large number of Somali-Minnesotans, many of whom expressed concerns surrounding Trump’s anti-Muslim and anti-immigration rhetoric during his campaign. Just two days before the election, on Nov. 6, Trump made a stop in Minnesota where he criticized the state’s Somali population, calling their presence a “disaster.”

For Rowan, however, the incident helped to bring more people in the community together, and Saturday’s turnout was an example of that. “It was a wakeup call for a lot of people,” she said. “A lot of people are going to get active who weren’t active before.”

Two weeks ago, the Southern Poverty Law Center released a report documenting nearly 900 incidents of harassment and intimidation across the nation since Election Day — many linked to Trump’s presidential win in some way. And according to the report, 34 of those incidents happened in Minnesota, including an incident where a Maple Grove high school student wrote racist graffiti in the bathroom, and another where a swastika was painted on a garage in north Minneapolis. Other Somali-Minnesotans have reported threats and names yelled at them from passing vehicles.

Nineteen-year-old Maryam Wardhere said that’s what brought her to Saturday’s rally. Wardhere, who’s Somali and Muslim, said she’s had random people yell things at both her and her younger sisters. It’s gotten to the point where her younger sisters are afraid to wear their hijabs in public, she said. “People are hating us,” she said. “It doesn’t make sense.” 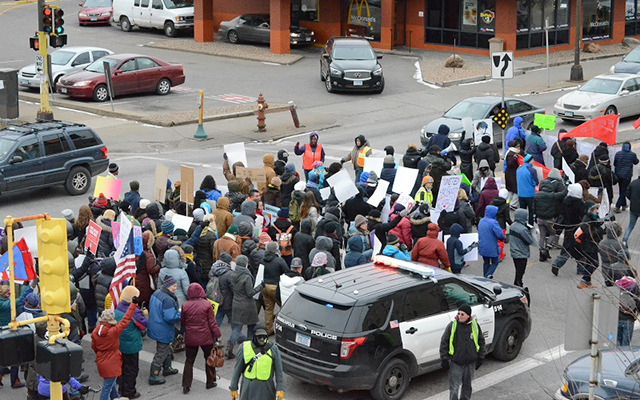 Mustafa Jumale, 26, echoed the same concerns. Despite being raised in Minnesota and graduating from the University of Minnesota, he believes Trump and his supporters have only painted Somali-Minnesotans in a bad light. “Donald Trump came to Minneapolis and specifically targeted the Somali community,” he said. “We’re scared. I’m scared.”

Still, Rowan said, she has hope that any Trump-led legislation or policies that could be harmful for the country’s immigrant population will be met with a healthy resistance, and she’s expecting more Minnesotans to join the effort. “If someone is interested in getting involved … please come find us,” she said. “We’re going to need a lot of volunteers because this is just the beginning.” 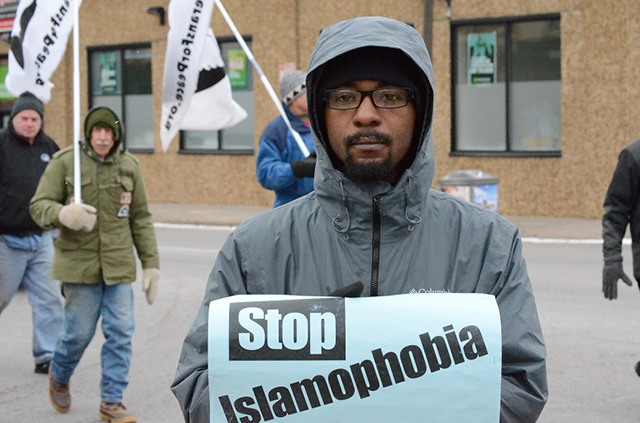 MinnPost photo by Kristoffer Tigue
Tyshawn Archer and his family moved to Minneapolis earlier this year from a Chicago suburb to escape what he called clear racial tensions, but said things aren’t much different in Minnesota.