The Twin Cities Native American community is doubling down on their efforts to support the protesters at the Standing Rock Sioux protest camp in Cannon Ball, North Dakota — despite recent efforts by federal and local officials to evict them.

The Army Corps of Engineers told Dakota Access Pipeline protesters to end their months-long encampment by Dec. 5, citing safety concerns over harsh oncoming winter weather — a message reiterated on Monday by North Dakota Gov. Jack Dalrymple. But since then, Standing Rock Sioux spokespeople have publicly announced they have no intention of leaving and several new efforts to bolster the camp have developed, including about 2,000 U.S. military veterans traveling to the site to act as human shields.

In Minneapolis, several fundraising efforts have cropped up over the last few weeks, with tens of thousands of dollars either being sent directly to the camp or used to buy supplies for the protesters. Two weeks ago, the Native American Community Development Institute (NACDI) raised more than $22,000 for Standing Rock protesters, most of which has been spent on medical needs for the protesters and on equipment and supplies meant to help winterize the campsite.

NACDI President and CEO Robert Lilligren said directly supporting the people at Standing Rock through donating supplies or money is their response to the governmental notices for eviction. “I would think that the idea of evicting people goes way back to the question of whose land it is and who has true, historic, moral authority over it,” Lilligren said. “That’s the essential question here and what will be settled in the courts at some point.”

Of the money raised, roughly half went towards supplies like heaters, food and winter gear, as well as direct efforts to provide medical services for injured protesters, said NACDI community organizer Jennifer Hall. “We sent out some propane heaters and fuel,” Hall said. “We’re just trying to help them get supplies to get structures more winter safe.” 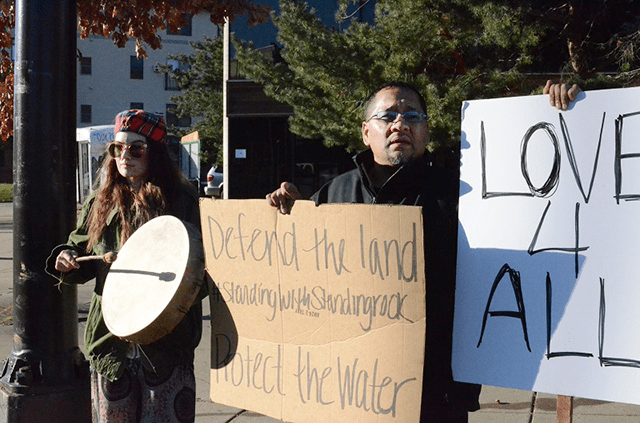 In total, NACDI spent or donated nearly $7,000 on winter supplies, gear and infrastructure for Standing Rock protesters, and donated another $7,000 to groups providing medical care for those injured. Much of those donated funds will also allow protesters to buy supplies from hardware stores to help construct more insulated housing, Hall said, so she’s not concerned for the safety of the protesters as temperatures begin to drop. However, the Army Corps of Engineers and Gov. Dalrymple both cited safety concerns, especially since the open fields on Cannon Ball provide little to no cover from harsh winter winds.

Still, Hall said protesters are properly prepared and for many of those at the camp, surviving the cold of winter is part of their heritage. “Our people have lived in harsh winter conditions for hundreds of years successfully,” she said. “So we’re bringing back that ingenuity that we’ve always had.”

On Nov. 12 at the American Indian Center in Minneapolis, hundreds shuffled through lines for food, or gathered with family to watch musical performances. Over at Pow Wow Grounds coffee shop, volunteers sold ground coffee, t-shirts and posters all emblazoned with “The Ave Stands with Standing Rock” logo. Overall, organizers believe more than a thousand people shuffled through the entire event, organized by several Minneapolis Native American organizations and businesses who wanted to raise money to support the Standing Rock protesters. 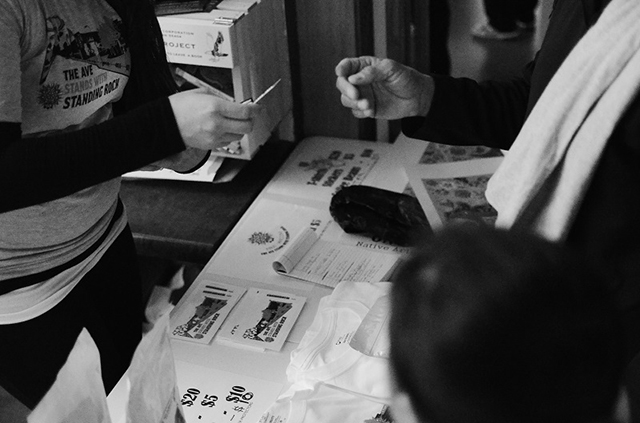 “The response has been tremendous,” said NACDI’s Lilligren. “We are over the moon with the results. It was truly a community effort.”

Lilligren equates some of that success to the anger that ensued among the local Native community after it was discovered that Hennepin County Sheriffs were helping to police protesters at the encampment, he said. “That really called a lot of people to action,” Lilligren said. “To see our people and equipment in these pictures on the front lines at the protest really angered people here.” 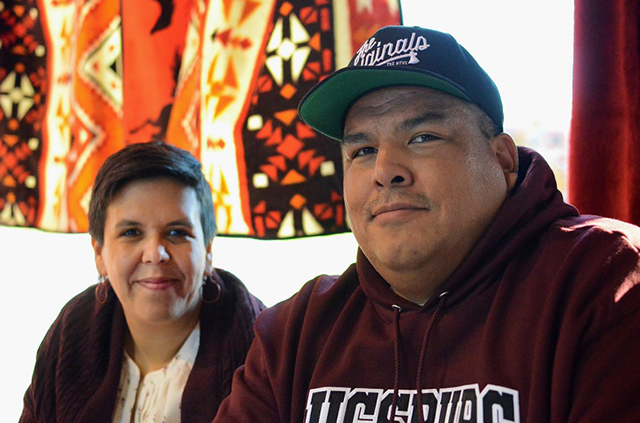 John Boyd, a member of the Red Lake Nation Reservation just north of Bemidji, said he came to the fundraiser because he recently experienced how unclean water can have fatal consequences for America Indians living on reservations. Last month while visiting the Red Lake reservation, Boyd said, his brother died from kidney complications after the nearest hospital couldn’t take him in because of an E. coli outbreak in the water supply.

Melissa Olson, a member of the Leech Lake Indian Reservation, said she’s supporting the protesters in Cannon Ball because it’s also about racial equity and she doesn’t believe the needs of the Standing Rock Souix are being considered fairly. “The first [DAPL] route would have been closer to Bismarck but they didn’t want it in their backyard,” she said. “Folks at Standing Rock don’t have the political power to do the same.” 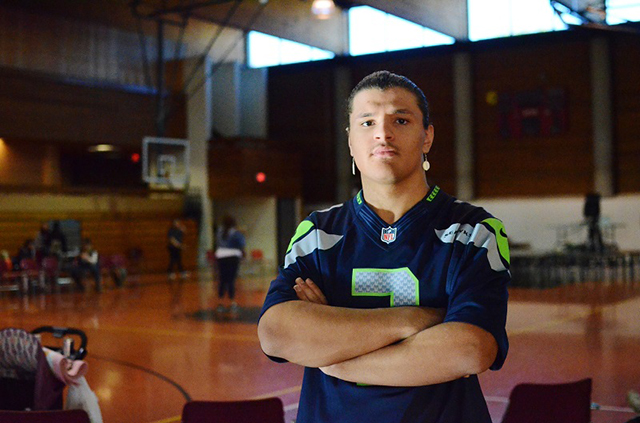 MinnPost photo by Kristoffer Tigue
Danté Michael Warren: “A lot of the reports of violence aren’t true. If you commit any violence you get kicked out of camp.”

Minneapolis resident Danté Michael Warren, whose parents are Navajo and Oji-Cree, said he came to show support after seeing how Native American protesters at the camp were being treated by police and security. He visited the camp back in September, he said, where he saw private security and police pepper spraying crowds and siccing attack dogs on what he said were all non-violent protesters.

Whatever the reasons, Lilligren said, the response from the Twin Cities Native community has been clear that they don’t want to see the pipeline built, and their fundraising efforts have greatly exceeded their expectations. “The initial online goal was $2,500 and we met that within a few days,” he said.