Wednesday night marked the last of three community listening sessions conducted by the U.S. Department of Justice’s Office of Community Oriented Policing Services as part of their voluntary review of the St. Anthony Police Department sparked by the high-profile fatal shooting of Philando Castile in Falcon Heights by one of its officers on July 6.

Hundreds attended the sessions, held January 9 through 11, where audience members discussed anything from racial profiling, to a lack mental health and de-escalation training, to not enough officers living in the areas they patrol. But many in attendance were skeptical that the Justice Department’s review would lead to any change among the state’s police departments and what they call longstanding problems police have with Minnesota’s communities of color.

In St. Paul, African Americans are more likely to be frisked or searched when stopped by police, and black drivers are given more citations by officers when pulled over than any other racial group, according to 15 years of data released by the city’s police department last month. Last year, blacks were also ticketed and arrested more often than other racial groups in areas patrolled by the St. Anthony Police Department, according to an analysis by the Pioneer Press.

At Tuesday’s meeting at St. Anthony Village High School, Minneapolis resident Pablo Tapia — who’s Hispanic — was one of several dozen who testified among the crowd of about 200. He said he’s experienced racial profiling from St. Anthony police in the past and tried to bring attention to the issue before. “This is not the first time I’ve stood in front of the Department of Justice,” he said. “This is not a new issue.”

That’s the problem, said Michelle Gross, president of local civil rights group Communities United Against Police Brutality. Gross has been working on police accountability issues for 30 years, she said, and doesn’t believe voluntary DOJ reviews will carry any impact in Minnesota. She points to similar reviews made in places like Calexico, CA, where a DOJ review last year declared the city’s police department needed to overhaul its force in almost every way — yet no significant changes were made. “The problem with the voluntary [reviews] is they end up making a whole lot of recommendations that never go through,” Gross said. 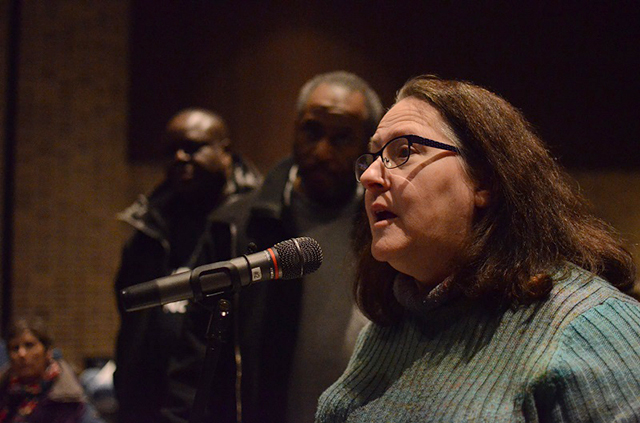 John Thompson, a former co-worker and friend of Castile, echoed similar complaints, saying the process would take too long and wouldn’t rear any teeth. “We don’t want y’all to listen to us anymore, we want justice,” Thompson told the DOJ on Tuesday. “We cannot afford another Philando Castile.”

Curtis Avent, a black civil rights activist who attended all three meetings, said Minnesota has a long history of documented civil rights violation cases. “You guys know this, I know this,” he told the DOJ at Tuesday’s session. “We’re sitting here having a listening session of what we clearly know to be civil rights violations that haven’t changed for many multitudes of years.” 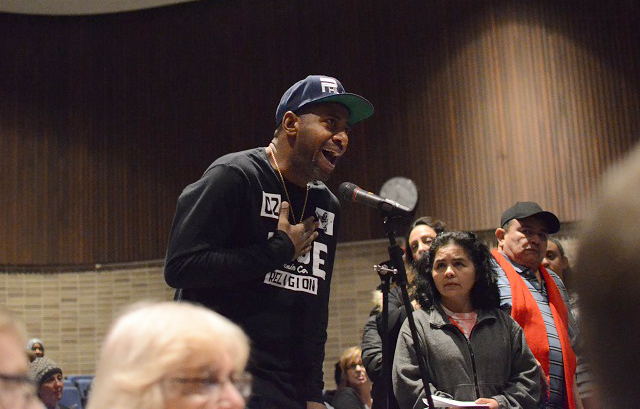 For Thompson, he hopes the DOJ’s investigation doesn’t stop with St. Anthony, but spreads out around the whole metro area. “When you finish this, step next door to Roseville, and then go next door to Maplewood, and then go to St. Paul, and then please go to Minneapolis,” he said. “This state has a police problem.”

Currently, St. Anthony police officer Jeronimo Yanez faces one count of second-degree manslaughter and two counts of dangerous weapons discharge. The shooting sparked weeks of fierce protest across the Twin Cities by activists and communities of color who believe Castile was racially profiled when killed.

Listening in on DOJ’s community listening sessions: ‘We cannot afford another Philando Castile’