Hosting a house party could soon become a political statement.

The campaign kicked off with 20 private house parties throughout the Twin Cities metro area that NOC helped host, and that will act as satellite hubs for people to gather, plan and coordinate with NOC’s larger collective network. Organizers said the parties will also provide a launching point for many who have little to no experience with political organizing but want to get more involved.

“Maybe they’re just getting into organizing, or they feel like they should do something and just don’t know what to do,” said NOC organizer Shiranthi Goonathilaka. “We’re trying to make organizing more accessible. People need an entry point.”

Goonathilaka said it’s clear that more people want to get involved in anti-Trump political demonstrations based on the tens of thousands who showed up to the Women’s March in St. Paul last week and the thousands who protested against the refugee ban this week. Already, more than 100 people have signed up to participate in NOC’s new campaign she said, and the organization held 20 parties last night in the Twin Cities metro area alone — including one as far out as Eden Prairie.

Nina Eagin found herself at one of those house parties in St. Paul Wednesday night after hearing about it through a friend. Having an Iranian-American brother-in-law, Eagin said she’s worried about Trump’s immigration policies and wants to learn how to get more involved in local opposition. “It’s one of the many reasons I’m here tonight,” she said.

Wendy Lauer, who lives in north Minneapolis, said she also came to the party to learn more about what others are doing to oppose the new administration’s policies — especially around issues like the Dakota Access Pipeline, which last week President Trump signed an executive order to continue forward, along with the Keystone XL pipeline.

But Lauer said she also came because she wanted to engage more in conversations she wasn’t used to having. She moved to Minneapolis last August from the rural city of Hutchinson, she said, where she never heard people talking about the state’s racial issues or holding protests. “It wasn’t something — in the small towns where I lived — that I even saw on Facebook or in the newspaper,” she said.

Brendan Stermer, who hosted Wednesday night’s party, said that’s exactly why he decided to get involved in the first place, because he wanted to see more of his friends and family having face-to-face conversations around difficult and often hot-button topics.

“Having a dinner party sort of gave us an excuse to invite people who wouldn’t normally talk about these issues,” Stermer said. “It’s easier to get people to come to your living room than it is to drive to a meeting.” 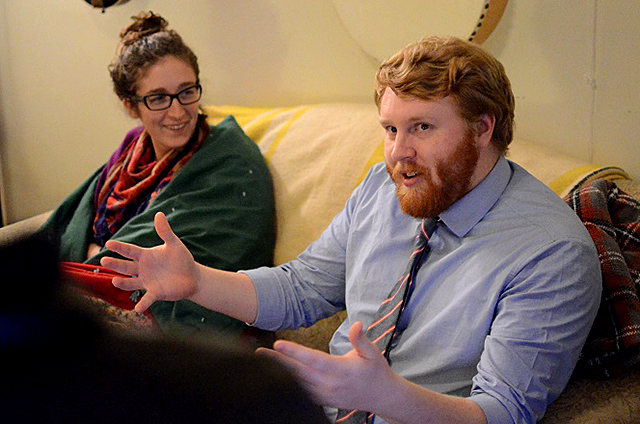 NOC organizer Wintana Melekin said that’s the point of the house parties campaign: to tap people who normally don’t run in political organizing circles and press them to start thinking about ways to get involved. “People can invite their friends, their family — people who would never show up to NOC’s office or to a protest,” she said.

Goonathilaka said the parties will also act as a way to educate people on NOC’s other work regarding uplifting the state’s communities of color. After the parties, folks can consider volunteering their time or resources towards NOC’s several other campaigns, she said.

But mainly, Goonathilaka said, the parties will start conversations in places and among people who haven’t been having them yet, and provide a safe space for people to gather and learn. “For folks who now feel like they need to do something, we’re giving them an option,” she said.

Currently, NOC will be hosting at least 15 more house parties scheduled throughout February.