The Minnesota Advisory Committee to the U.S. Commission on Civil Rights wanted to know how a series of police reform recommendations are being implemented since former-President Barack Obama issued an executive order initiating the changes nearly three years ago.

So at a public forum early this week, the Hennepin County Sheriff’s Office updated the USCCR on their progress, including new education for officers, better transparency from the department, and even a new body camera program the county is rolling out later this spring.

Yet many community members and experts who also spoke at the panel said that they still believe there is a lot more work to do when it comes to reforming police tactics, training and culture. “In the most recent decade, we continue to grapple with examples of civil rights violations in some communities, specifically communities of color,” said Tracie Keesee, the New York Police Department Commissioner of Training and one of forum’s panelists. “Policing is very complex and there is still more that can be done … the question is, ‘Where do we go from here?’”

The executive order signed by Obama commissioned the USCCR to examine police practices across the country in the wake of several high-profile police shootings involving unarmed African Americans. The commission eventually issued more than 150 recommendations on how to improve police practices and police-community relations — particularly within communities of color.

For the last three years, said Stanek, both the Minneapolis Police Department and the Hennepin County Sheriff’s Office have been reforming several of their policies and procedures in an attempt to improve police-community relations, as well as decrease racial disparities among things like arrest rates and use of deadly force, since before the national task force released their official recommendations. 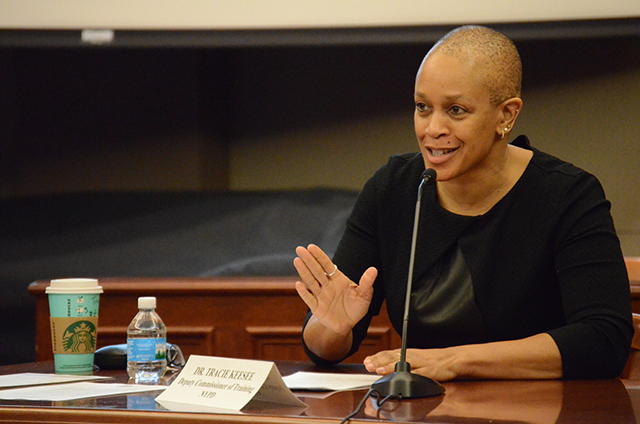 MinnPost photo by Kristoffer Tigue
New York Police Department Commissioner of Training Tracie Keesee: “Policing is very complex and there is still more that can be done … the question is, ‘Where do we go from here?’”

So far, Stanek said, their department has reformed their training and education programs to include more cultural diversity and community engagement, implemented new data release practices to make their department’s information more accessible to the public, and developed a more clear-cut and structured use-of-force policy. Later this spring, Hennepin County will begin to roll out their body camera program.

“We have policies that govern use of force,” Stanek said. “From what happens, to the video footage, to a review by a supervisor, to what is a range of discipline if they’re found to be outside of policy. There are some agencies who don’t have any of that.”

“We’re very happy with the progress,” Stanek said. “So is the Department of Justice. We’re happy to be a model for the country.”

Work to be done

Not surprisingly, other panelists pointed out how much work remained to be done when it comes to reforming police practices in the state.

The ACLU of Minnesota’s Ben Feist, for example, pointed to the persistent arrest and incarceration disparities among the state’s communities of color. According to a 2015 ACLU report, African Americans and American Indians are nearly 9 times more likely to be arrested for low-level offenses in Minnesota than their white counterparts. African Americans make up six percent of the state’s population and Native Americans make up roughly one percent.

Keesee said those disparities are, in part, the result of a lack of willingness to fund the kind of training officer’s need to be more successful. “Training is another area that is often underfunded and typically the first thing questioned when something goes wrong,” she said. 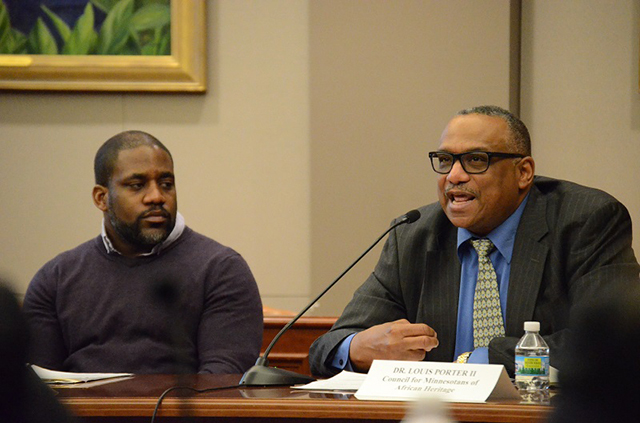 MinnPost photo by Kristoffer Tigue
Justin Terrell of Take Action Minnesota and Louis Porter of the Council for Minnesotans of African Heritage.

Currently, the Minnesota Legislature is considering a bill that would provide police officers more funding for training in crisis response, conflict management and cultural diversity. But Feist said the bill doesn’t go far enough. “We are disappointed that there’s a lack of commitment on the statewide level to implement task force recommendations [and] … fully fund these efforts,” he said.

Other panelists, like Justin Terrell of Take Action Minnesota and Louis Porter of the Council for Minnesotans of African Heritage, said trust won’t be rebuilt until communities become more involved in the decisions made regarding police reform, and committees like the Minneapolis Police Conduct Oversight Commission or the Police Conduct Review Panel are given more power to hold officers accountable.

“Civilian review boards should be responsible for implementing an independent investigation every time there’s an incident of police using force resulting in death or serious bodily harm,” Porter said. “The problem is the boards don’t have enough power, don’t have enough teeth.”

Report on police-reform shows progress in Hennepin County, but still room for improvement