Kathleen Murphy has been a life-long public transit user because of a congenital condition that prevents her from driving. “I have a hearing loss that I’ve had from birth,” she said. “So, my doctor said it’s best for me not to drive because I’d be in too many accidents.”

Murphy, who recently turned 65, said she takes city buses and trains to do everything from buying food from the local grocery store to visiting friends in the Twin Cities from her Richfield home. But under Minnesota House Republicans’ current state budget proposal — which would drastically cut state funding to Metro Transit operational costs and eliminate future metro-area transit expansions like the Southwest light rail line — many people who depend on public transportation, like Murphy, are worried they may lose important transit lines they need to get around town.

Infighting over transportation projects and how to fund them is common at the state legislature, and the House budget, as-is, would likely be met with a veto from Gov. Dayton. Still, many transit advocates are concerned over what they see as an increasing hostility from state lawmakers towards both current and future transit lines.

“The thing that makes the stakes really high this year is … the approach from the Legislature of really drastic cuts to bedrock transit services in the metro area,” said Andrea Kiepe, the lead organizer for Transit for Livable Communities, which held a rally at the State Capitol earlier this week where about 100 gathered to express their opposition to the cuts. “And like all austerity approaches, it’s going to affect the people who are most vulnerable.”

The House proposal would cut $120 million from regional transit and completely eliminate general fund contributions by 2021, while also divesting state funding from operational costs of both the blue and green light rail lines, according to the Metropolitan Council, who operates the metro region’s five-county transit systems. It would also raise the projected Metro Transit budget deficit to more than $120 million over the next two fiscal years. 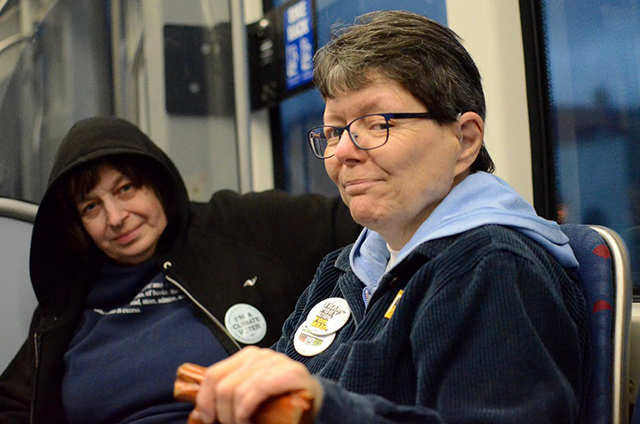 That means up to a 40 percent cut in current transit lines and the need to increase fares by up to 50 cents to help make up the difference, said Met Council Chair Adam Duininck. Last week, the Met Council began hosting public hearings regarding the potential fare increases, Duininck said, and the brunt of any fare hikes or service cuts would mostly be felt by those dependent on transit, like the disabled and low-income families.

For northeast Minneapolis-resident Amity Foster, who doesn’t drive due to her epilepsy, that means planning significantly more time for relatively short trips. For example, Foster said, she can currently take one bus route to the nearest grocery store about a mile and a half from her home. But before they added that route a few years ago, she said, she had to travel downtown and transfer twice just to make the same trip. “For a long time that route wasn’t there,” she said. “It’s probably one of the routes that would get cut.” 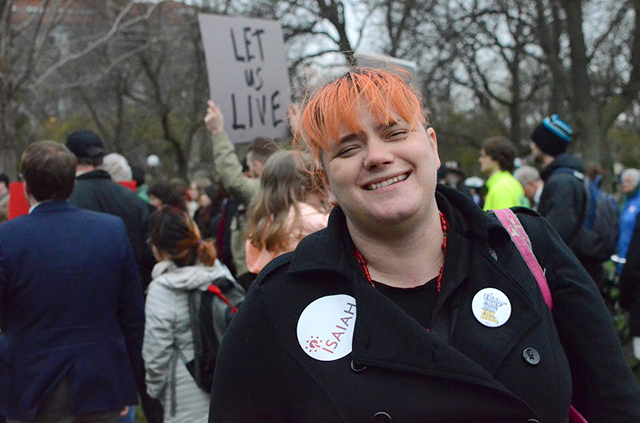 MinnPost photo by Kristoffer Tigue
Northeast Minneapolis-resident Amity Foster can currently take one bus route to the nearest grocery store about a mile and a half from her home.

Clifton Manneh, a student at North Hennepin Community College in Brooklyn Park, said four years ago he had to take six to seven buses to get to and from school from his home in Blaine. He’s worried that a forty percent decrease in services would cut many lines heading to and from suburbs, which he says would be detrimental to students like him who lack better options during school.

Minneapolis-resident Kirk Mattson, who has cerebral palsy that prevents him from driving, said not only would service cuts or fare hikes greatly reduce his mobility to get around the cities, but they would strip away his dignity, too. “If we cut [public transit] down, it will become a second-rate transportation mode,” Mattson said. “It will be for disabled folks, and poor folks, and single moms, and old folks and no one will care about it.” 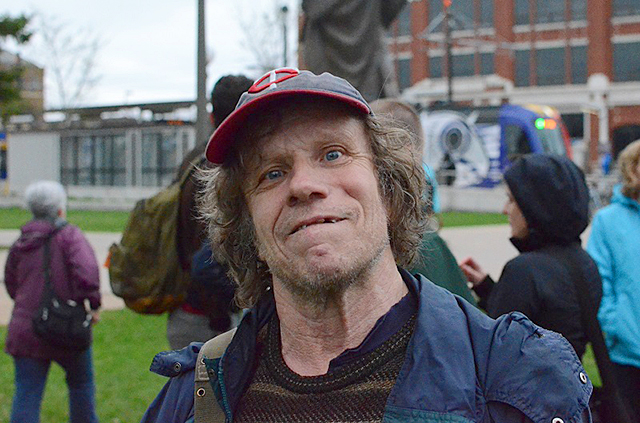 MinnPost photo by Kristoffer Tigue
Minneapolis-resident Kirk Mattson has cerebral palsy that prevents him from driving.

Many transit advocates say expanding public transit will also help to grow the Twin Cities’ population and attract young, new talent to the region. Both Minneapolis and St. Paul leaders have expressed the desire to grow their cities by hundreds of thousands over the next decade, and Duininck said a healthy and robust public transit system is vital to achieving that.

Part of that is because millennials are more conscientious about the climate and less inclined to drive cars, said Minneapolis-resident Michael Olson. 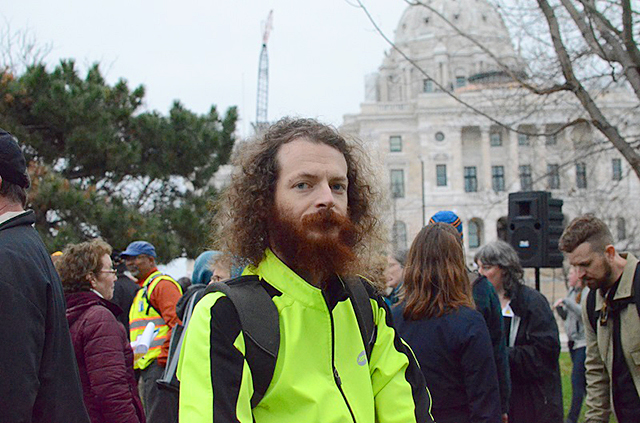 Olson, who’s 29, said he owns a car but only drives it once every couple months and sees emphasizing individual car use as socially irresponsible and illogical. “It’s … a 2,000 pound piece of metal to carry 150 pounds of flesh,” he said. “Personal transportation via automobile is grossly inefficient.”

For Olson, expanding the cities’ public transit lines makes the most sense, both for attracting new people, and creating better transportation conditions for those already here. “You’re not going to be able to grow the city by that population jump if you’re not investing in public transit,” he said. “There’s only so many cars you’re going to fit on the road before they stop moving.”

Fearing cuts that will affect the most vulnerable, transit advocates rally at Minnesota Capitol